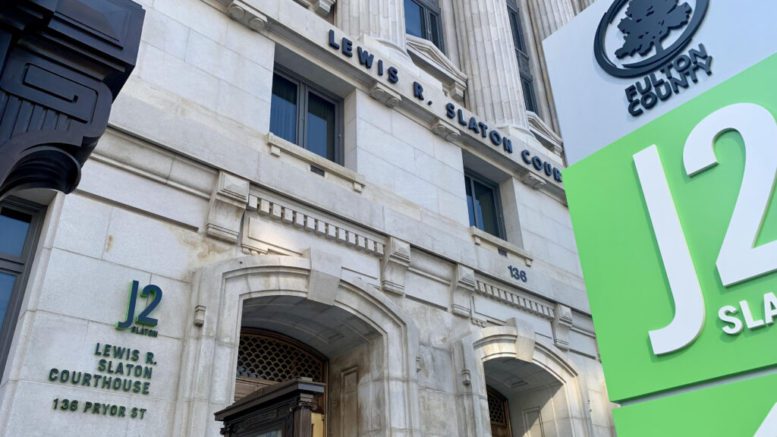 A new attempt to stop Georgia’s anti-abortion law has been filed in Fulton County Superior Court, opening a new front in state court for the post-Roe legal fight one week after a federal appeals court let Georgia’s law take effect.

The lawsuit was filed Tuesday by the American Civil Liberties Union of Georgia on behalf of health care providers and advocates even as opponents continue to challenge the constitutionality of the law’s so-called personhood provisions in federal court.

The 11th Circuit Court of Appeals ruling let Georgia’s 2019 law immediately take effect in its entirety last week after the U.S. Supreme Court overturned Roe v. Wade in June. The law bans most abortions after fetal cardiac activity is detected, which is usually at about six weeks and before many women know they are pregnant.

This new challenge argues the law violates Georgia’s state constitutional right to privacy and contends that the state Legislature should be required to pass a new law since HB 481 was signed into law by Gov. Brian Kemp when Roe v. Wade was still federal precedent.

The ACLU has also asked Fulton County Superior Court Judge Robert McBurney to hold a hearing early next week and block Georgia’s law while the new challenge is being considered.

“So, we are asking the Georgia courts to act as quickly as possible to stop this nightmarish ban before even more Georgians are harmed,” she added.

The lawsuit highlights five anonymous patients who say the ban has already harmed them.

One 21-year-old college student said she found out she was pregnant July 19 and made an appointment for an abortion the next day, which ended up being the day the 11th Circuit Court of Appeals approved the state’s six-week ban.

“This was the first time I had heard about Georgia’s abortion ban, and it went into effect only hours before my scheduled appointment,” the student, who is only identified as Jane Doe 1, wrote in an affidavit that was filed with the lawsuit.

She was told fetal cardiac activity was detected during an ultrasound and that she was six weeks and two days pregnant, making her ineligible for an abortion in Georgia. Now, she’s planning to seek an abortion out of state, but she’s worried about her mother, who controls her bank account, finding out.

“I can’t imagine that I will be able to pay for this travel without her realizing it,” the unidentified student said. “I estimate seeking this care will cost approximately $1,000 and require my partner also taking the time to travel with me. I also feel frustrated that this horrible ban is now in effect. This is about people’s lives, like mine, who are now being dictated by the government and courts. I only found out I was pregnant on Tuesday, and the very next day I had my life choices made for me.”

Georgia’s law allows only a few narrow exceptions: in the case of incest or rape – if the patient can provide a police report – or when a woman’s life is in danger.

A challenge in state court had been expected.

“We are currently reviewing this filing and we will uphold our constitutional duty, as we do with all lawsuits against the state,” said Kara Richardson, spokeswoman for Republican Attorney General Chris Carr’s Office.

The governor’s office has presented the state’s anti-abortion law as one of many measures passed in recent years to support life “at all stages,” pointing to bills like one this year that extended Medicaid coverage for low-income moms to one year after delivery, up from six months.

“We will continue the important work of protecting life at all stages and increasing supportive services for mothers and their children before, during, and after birth,” Kemp’s spokeswoman, Katie Byrd, said in a statement Tuesday.

The new lawsuit’s arguments may feel familiar, but there are key differences.

The 11th Circuit Court of Appeals rejected the ACLU’s arguments against the state’s anti-abortion law, but this suit is based on Georgia’s right – rather than the federal right – to privacy, said Georgia State University law professor Anthony Michael Kreis.

“In some ways, it is a similarly colored claim that we’ve seen before because Roe v. Wade was built out of a right to privacy, but there’s a whole different, distinct doctrine and distinct body of law that governs Georgia constitutional law, and that’s what we’re dealing with now,” he said.

Kreis says the state has long recognized privacy rights beyond what the U.S. Constitution provides.

“The right for same-sex intimacy was established in Georgia constitutional law about five years before it was in federal law. So, Georgia courts have historically said that our right to privacy is much more expansive and sweeping than federal constitutional law,” Kreis said.