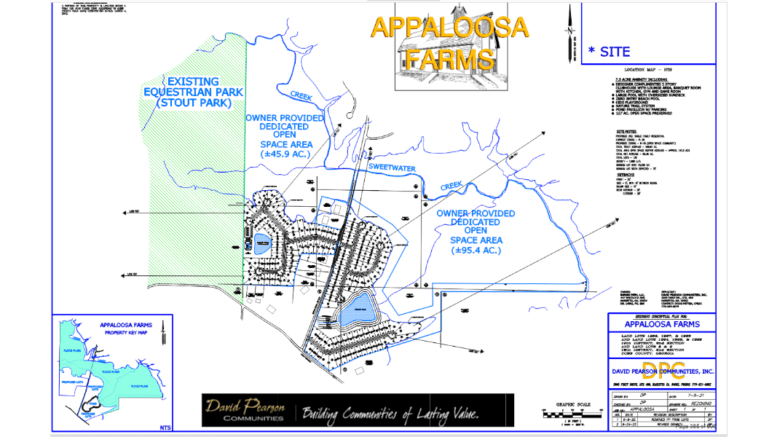 At Tuesday’s meeting of the Cobb County Planning Commission the commission voted 3-0 to hold (delay) a rezoning request that would allow a maximum of 130 single-family houses on a large property near Powder Springs in the southwest part of the county.

The property is just over 190 acres and is on on the east and west side of Brown Road, north of Stout
Parkway.

The zoning is currently R-30. The applicant requests a mix of R-15 and OSC. If the rezoning goes through it will allow the applicant to build houses along Brown Road and Stout Parkway at a higher density than current zoning allows, and the OSC (Open Space Community) gives the developer the ability to concentrate higher density on portions of the property by keeping other parts of the property as greenspace.

Here are the descriptions of those categories from the zoning documents:

R-30 (the current zoning) is described in county code as follows:

R-15, the category the applicant is requesting for the residential part of the property is described as follows:

So the effect of the applicant’s request would be to allow them to build on lot sizes of 15,000 square feet rather than the current 30,000 square feet, and the designation of a portion of the property as OSC could allow an addition 10 percent of density along the roadways.

OSC is described as follows:

OSC (Open space community overlay). The OSC overlay district is established to encourage the preservation of natural resources within residential development. The overlay district may be overlaid upon the R-80, R-40, R-30, R-20, and R-15 zoning districts. Land and water are protected by limiting land disturbance and decreasing the percentage of impervious surface within the planned community, and by adding flexibility to site plan design. Open space design is intended to result in more efficient use of land, lower development infrastructure costs, and the conservation of land for recreation or aesthetic and environmental enrichment. It is not the intent of this overlay district to increase overall development densities, but to allow for the stipulated densities of the underlying zoning district. However, there is an opportunity to earn an additional ten percent density, not to exceed the recommended densities of the Cobb County Future Land Use Map. It is also the intent of the overlay district to encourage design flexibility and development that is complementary to surrounding existing neighborhoods. Open space community (OSC) plans are approved as site plan specific.

Commissioner Michael Hughes, who represents District 4, where the property is located, had originally put forward a motion to approve the request with the deletion (change) of the property to R-20.

District 1 Commissioner Fred Beloin proposed that a decision not be made until the applicant creates a site plan with the R-20 and OSC zoning that Hughes proposed rather than the R15 in the original request.

R-20 is described in code as follows:

So R-20 falls between the lot sizes of the existing zoning, and the R-15 requested by the applicant.

The property is owned by Barnes Farms LLC, which is headed by former Georgia Governor Roy Barnes, and the applicant is David Pearson Communities, Incorporated.

Attorney Kevin Moore represented the applicant at the hearing.

“It’s located primarily on Brown Road but also extends down to the intersection of Brown and Stout Parkway. It’s also located as you can see on this aerial, you see that the two tracts highlighted (are) separated by Brown Road comprising the total of 190 acres to the left.”

“In addition, it runs along Sweetwater Creek on the north side,” he said, “So you see a vast area through here that is largely undeveloped, and that’s in large part because of the location of Stout Park. Also, as a result of Sweetwater Creek, which has an extensive floodplain area, the proposal is to rezone this property to R-15, OSC.”

“We think the OSC, meaning the open space community designation is actually ideal and best suited for any development of this property,” Moore said. “Of the 190 acres, we will end up with approximately 125 acres of dedicated open space, which is almost unheard of in terms of one single project that will add contiguous open space along the entire northern portion of this property.”

” This encapsulates quite a bit of area that will be adjacent to existing Stout Park as well,” he said, “which provides for tremendous opportunity for conservation for this property, leaving approximately about 65 acres of property that’s located outside the floodplain for development of a residential single family subdivision.”

The opposition speakers raised concerns about what they described as flooding on the property, and the increased density.

Clithon Rice said, “I’m the HOA president of the subdivision directly on the other side of Sweetwater Creek: Brown’s Crossing.”

“We are adamantly against the rezoning,” he said. “If they want to build a subdivision all we request is that they keep it R-30.”

“The dedicated space … it is a flood plain. When it rains, it floods every time. Not some of the time. Every time. Some of my neighbors, they have water coming up in their backyard when the rain comes up that bad,” Rice said.

Several other speakers rose and also spoke about flooding and density.

Hughes asked Moore and the opposition if they would be willing to meet with each other to negotiate.

Moore said the developer would be willing to meet. Rice said he had no interest in meeting with David Pearson.

Hughes at first made a motion to delete the property to R-20, then after Beloin raised the subject of getting a new site plan at R-20 from the developer, Hughes withdrew his motion and put forward a motion to hold the case until the August Planning Commission meeting.