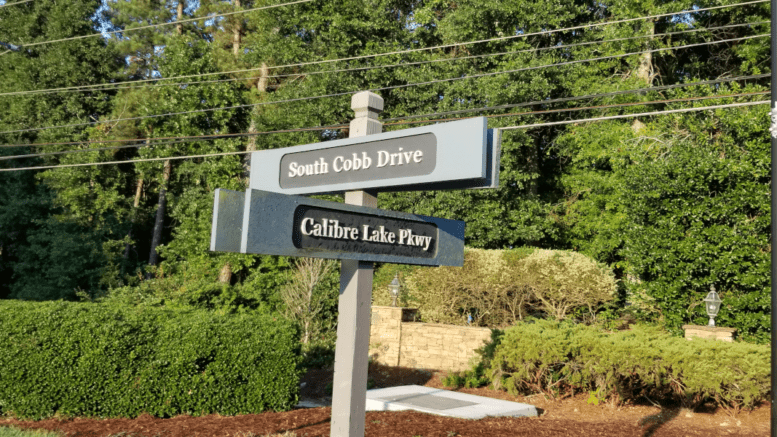 I didn’t expect to write my second installment of Accidentally car-free so soon, but this morning I decided to do a one-hour out, one-hour back walk along Oakdale Road and South Cobb Drive in the direction of the East West Connector. If you have no idea what Accidentally car-free is about, visit the link in the first sentence to learn about my project.

The short summary is that the probable death of my 1994 Honda gives me an opportunity to try to stretch the limits of getting around Cobb County without a car, including foot, bicycle and public transit.

I’m focusing on walking at the moment, since my bicycle needs maintenance. That limits me to Mableton and Smyrna, since I live right on the border of the two.

We do some of our shopping at Sprouts Farmers Market, and while I didn’t have enough time to allocate this morning to get all the way there, I wanted to see how close I’d get on foot in an hour.

It turns out I got pretty close, and probably in another 20 minutes I would have been there.

I reached the entrance to a set of apartments called Calibre Lakes after an hour of walking. Those of you who drive (or cycle) southward on South Cobb Drive probably know it as the place you have to move a lane to the right to make a right turn onto Highlands Parkway (about two blocks southward).

According to Google maps the apartments are a 23 minute walk from the Sprouts Farmers Market, so subtracting a few minutes for the walk up the apartment driveway probably puts the estimate of how long it would have taken me to get there to about an additional 20 minutes.

So using Google’s reckoning, a walk from my house to the Sprouts would be about 1 hour 20 minutes.

While I walked I noticed some things that were needed to make the route friendly to pedestrians.

My starting point took me up the south leg of Oakdale Road (the part that runs between Veterans Memorial Highway and Highlands Parkway). Most of that part of Oakdale Road had adequate sidewalks, but there were two railroad bridges with narrow clearance from the travel lanes to the fence, and no sidewalks. This is not conducive to pedestrian safety.

Another condition, while not dangerous, creates unpleasant conditions for walking. Sidewalks are intermittent on the stretch of South Cobb Drive I walked. While the shoulders and ROW were wide enough to allow safe walking, the uneven ground and wet grass were not enjoyable to walk on.

There are a lot of heavily walked areas across metro Atlanta that need safe and clear pedestrian crossings. There’s a particularly dangerous one on Highlands Parkway where I frequently see pedestrians dodging traffic because to walk to either legal crosswalks is inefficient. Often “well, all they have to do is walk down to the crosswalks at the intersection” is not good enough. Pedestrians should be given accommodations comparable to drivers.

This particular crossing point is between two extended stay motels and a cluster of businesses used by the residents, including fast food outlets and a convenience store.

I’m facing one of the extended stay motels in the photo below. Behind me was a cluster of businesses including a convenience store and several fast food outlets. Note both the distance and the lack of crosswalks or pedestrian lights between where I stood and the extended stay. Depending on the time of day, both sides are either clogged with cars, or have intermittent fast-moving traffic.

An aggravating factor is that cars jockey for lane position to make the turn onto Oakdale Road, or to turn across the confusing lanes of traffic into the extended stay parking lots.

I didn’t intend to spend so much time writing about what’s wrong along the route. All in all I had fun on the route. But it’s important to emphasize that 70 years of planning went into increasing traffic flow at the expense of pedestrian conditions and pedestrian safety. Lately most planners realize that, but there are a lot of areas that need improvement.

Update on condition of pedestrian struck by car in Marietta