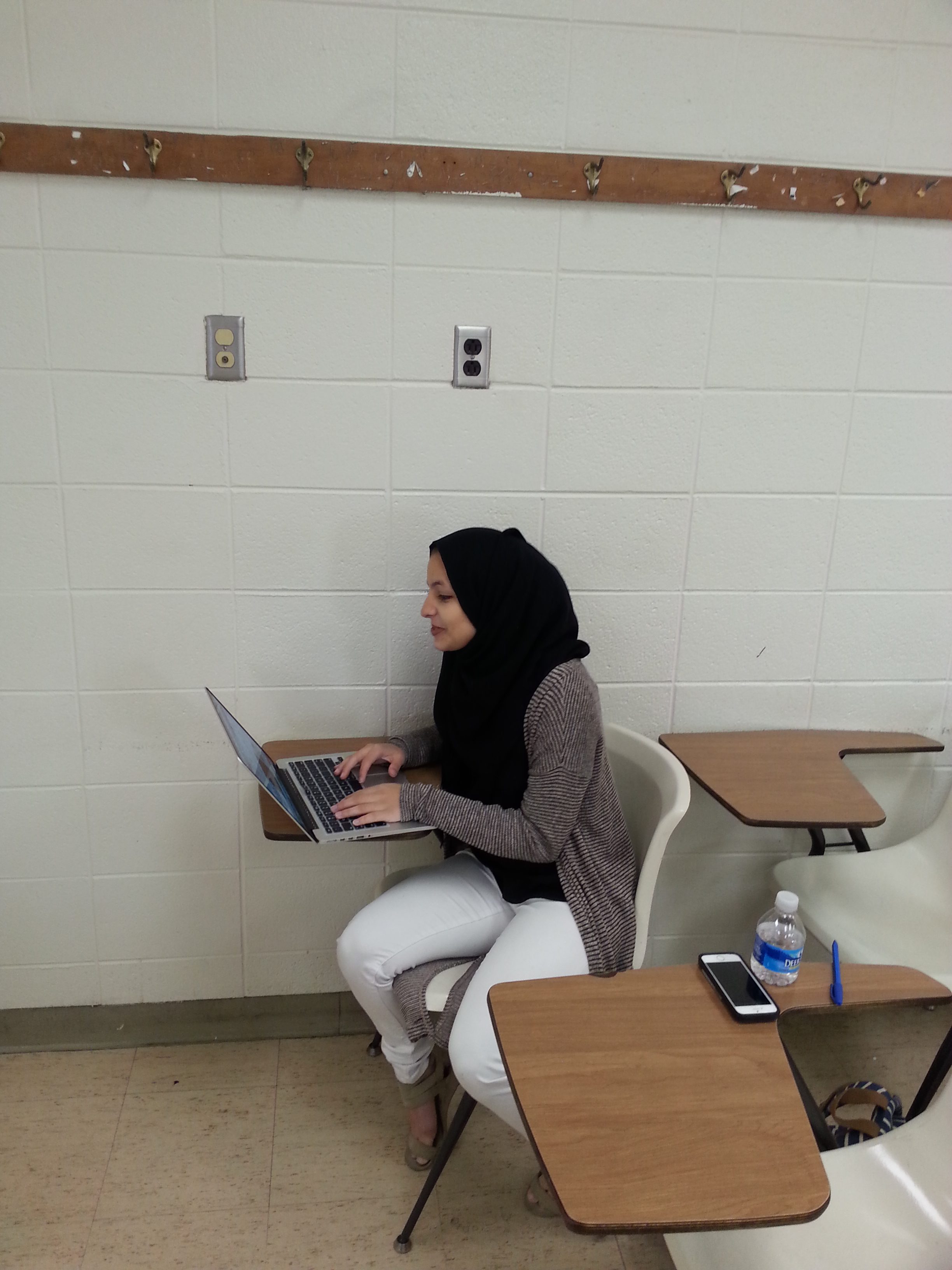 Aya Ben Abdellatif is an American. She was born in Columbus, Georgia, and grew up and attended school in Cobb County. Yet there have been times when people around her, other Americans, have tried to make her doubt her identity as a citizen of the United States.

Abdellatif is a Muslim, of Tunisian descent, and she wears a hijab. She spoke to me in the library at Georgia State University, where she is pursuing a bachelor’s degree in Political Science with a concentration in international affairs.

“My two biggest memories of not feeling accepted, and really rejected in American society wasn’t in school.  They were both actually at Fourth of July celebrations.

I think I was in the second grade … at a Fourth of July celebration … I didn’t wear a headscarf at the time, but my mom did.  So me, and I think, two of my other siblings were around at the time.  And I remember this group of girls passed us, and they were like: ‘Why are they here?  They’re not even American!’  But I’m not even a dual citizen of my mom’s country.  This is the only country I know.

And I think whenever I was fourteen, we were at Stone Mountain, and we had just finished the pledge to the flag, on the Fourth of July, and someone says ‘Thank, God, I’m American, and I don’t have to wear a headscarf to be free!’”

She talked a bit more about the effects of incidents like this on young Muslim-Americans.

“Well if I’m not American, who else will accept me? And groups like ISIS really want that.  They want you to feel alienated … they want you to turn against your fellow countrymen, so that you can join them. So whenever Ted Cruz and Donald Trump and whoever else are talking about fighting terrorism, stop fighting Muslim-Americans that want to stop terrorism, and feel just as strongly about it as you, because at this point, you’re encouraging it. Start fighting the actual terrorists, and do something about it and stop trying to alienate people, which creates terrorism, which creates anger.”

“Over the next four decades, Christians (worldwide) will remain the largest religious group, but Islam will grow faster than any other major religion, mostly because Muslims are younger and have more children than any other religious group globally. By 2050, the number of Muslims will nearly equal the number of Christians. In the U.S., the Muslim population will remain small, but is projected to grow rapidly.”

A study entitled “U.S. Mosque Survey 2011” found that, at the time of their count, Atlanta ranked seventh among Metropolitan areas in number of mosques.

Dr. S. Rashid Naim is a professor in the political science department at GSU.  He’s also one of the founders of the Islamic Speakers Bureau here.  The ISB was formed to provide a resource for schools and other institutions to educate the community about Muslims and Islam.

Naim is from India. His interest in political science arose from his family’s deep involvement in Indian politics.  His grandfather was in the movement for independence from Britain, and became India’s Minister of State for Foreign Affairs.  As a child Naim would read the headlines from India’s national daily newspapers aloud to his grandfather, who had lost his vision, and then read him selected articles.

Sitting at his desk at GSU, Naim talked about how the Islamic Speakers Bureau was formed, to educate students and teachers in Georgia’s school system about Islam.

“In the late 1990s many school curricula started including world history as part of their social science curriculum, and Middle Eastern history and religion. Just an introduction to different religions of the world.  Muslim parents found that the teachers didn’t have the resources to teach those things, and so either they would just skip those segments completely in the class, and talk about other things, or they would use material which was, in our view at least, giving a very distorted picture.  So I’ll give you an example.  A teacher, who turned out to be a wonderful, wonderful person later on, and worked with us very closely, in the first year she taught about Islam, in her class, she made them read this book by this American lady who was married to an Iranian man, who got divorced, and he took the girl to Iran.  And the book is called ‘Not Without my Daughter.’  And so the entire context that the entire class got about what Middle Eastern, Muslim, was ‘Oh, these are people that kidnap daughters and take them from their mothers’”

He described Islamophobia as an irrational fear of Islam.

“The level of ignorance about what Muslim beliefs are, even so many years after 9/11 and all the talk about Islam, is really abysmal … It’s not even a question of interpretation, it’s just factually inaccurate stuff.”

Abdellatif said she attended Al-Farooq Masjid, a large mosque on 14th Street in Atlanta, when she was a child, but has been going to Masjid Al-Hedaya, in Marietta, for most of her life.  She described the ethnic and national backgrounds of Muslims at the mosques she attended as diverse.

“It’s interesting how much Atlanta has grown in terms of Muslims, whether they’re refugees coming from Somalia, or coming from Iraq, or coming from Syria now or just immigrants from across the country, coming down to Atlanta … Atlanta in general has seen lots of population growth. And the Muslim community has also grown, I think, ethnically. But growing up, I do remember, even when there weren’t a lot of us, there was always, still, a mixed community. I had ‘aunties’ in the mosque, who were like black, and south Asian, and Arab. I wasn’t around too many Arabs, but they were still there, they were still present. Our community was smaller, but there was still a mixed community. There are some mosques which are predominantly one sort of race, but in my experience, it’s always been pretty mixed.”

Soumaya Khalifah sat at a table in front of a Starbucks on Atlanta Road in Smyrna, on a sunny, windy day.  She is the executive director of the Islamic Speakers Bureau.

She was born in Egypt, raised in Texas, and moved to Atlanta 27 years ago. She was one of the founders of the ISB, which launched in August of 2001, just weeks before 9/11.

“One of the reasons why we started the Islamic Speakers Bureau is that we wanted to speak on our own.  We didn’t want the experts to speak on our own behalf. We wanted American Muslims to speak about themselves, and for themselves. We have a wide variety of topics we speak on. We also create content when we do have special requests. So recently someone suggested ‘Jesus and Islam.’ And we had the expertise to create that presentation, and go out and deliver it.  So it’s anywhere from an overview of Islam and Muslims, that talks about demographics, that talks about beliefs and practices, talks about values, to women in Islam, to Muslim contributions to civilization, to many, many different things. We also do cultural competency training: for educators, for law enforcement, for media, and so really our offerings are very wide, and very specific to the needs of our audiences.”

Edward Ahmed Mitchell is the new executive director of the Georgia chapter of the Council on American-Islamic Relations, or   CAIR. He’s a young African-American lawyer, and a convert to Islam.  We met at Masjid Al-Mu’minun, a mosque on Henry Aaron Boulevard near Turner Field.

“I was born in Los Angeles, in 1986, so not that long ago, but it feels like a long time. My father is a Muslim.  He converted to Islam before I was born, married my mother, who is a Christian. Growing up, I was exposed to both faiths, Islam and Christianity, and I embraced Islam when I was about 18 or 19 years old, so that was about 10 years ago, and started practicing when I was in college.  I attended college at Morehouse here in Atlanta.  I went to law school at Georgetown University and I came back home to Georgia right afterwards, because this is home for me.  It’s where I went to middle school, high school and college, so Georgia’s home, California’s where I was born, and that’s my background in a very brief nutshell.”

“CAIR is the largest Muslim civil liberties organization in the United States.  It was founded in 1994, and the best way to describe what CAIR does, for me, is to say what the NAACP does for African-Americans or the Anti-Defamation League does for Jewish-Americans, CAIR does for Muslim-Americans.”

In each of the interviews I asked what would be important to emphasize to the non-Muslim community.

Naim said he’d strongly encourage non-Muslims to get to know a Muslim, because polling had shown that non-Muslims who knew at least one Muslim were less likely to be prejudiced.

Khalifah said there were four misconceptions she’d like to stress.

So for the Islamic Speakers Bureau one of the things that we really stress is face-to-face interactions, because when they see a speaker they learn where they live, learn about what they do, learn about their children … it humanizes the Muslims in their eyes.”

Mitchell said he’d like non-Muslims to learn about Islam. He said the mosque he attends in Fayetteville hosts a question-and-answer talk for non-Muslims on the first Tuesday of each month, and that people are welcome to ask any question they have about Islamic beliefs and practice.

“We’re not terrorists.  Do we have some psychos that claim to be Muslim?  Yes, but same thing with people like the KKK, who claim to be doing what they are in the name of Christ.  You have crazies in every religion, and I don’t want to apologize for being Muslim, I don’t want to apologize for who I am, or who my identity is.  I’m not related to the people who have done these things, so I’m not going to apologize in their name. Same thing if someone was killed down the street, who I knew nothing about, but just because they’re a fellow Atlantan, just like me, doesn’t mean I’m going to apologize for them. I really do believe Islam is a religion of peace.

Kennesaw native to be honored at Paul Anderson Youth Home

Thanksgiving hymns are a few centuries old, tops – but biblical psalms of gratitude and praise go back thousands of years