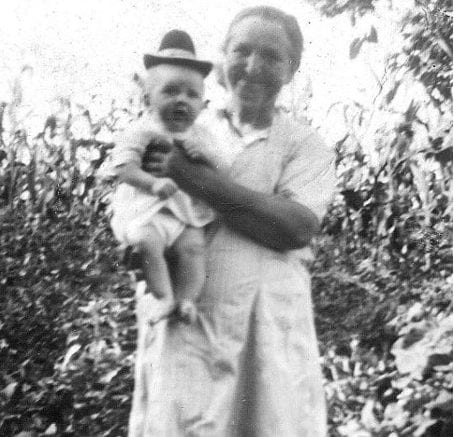 Ford Chance of Marietta posted this photo on his facebook page.  In the picture, his grandmother, Nervie Chance, is holding him in front of a corn field on the farm in Cobb County she worked with her husband.   Chance said the little hat he is wearing is probably from the Southeastern Fair, a yearly event held at the Lakewood Fairgrounds.

He said “When they first came to Cobb in 1909 or 10, they were tenant farmers, and lived on several of the large farms, mostly in East Cobb and out Dallas Hwy, although they did live close to Powder Springs at one point in time. The 1910 census lists them on Holly Springs Rd.  I don’t know when, but at some time they managed to buy a farm out Dallas Hwy off Friendship Church Road in the Due West community, and although I was very young, I have a couple of memories of that farm. My Mom’s family were tenant farmers also, and they lived on the same farm at some point in time.”

Be the first to comment on "Nervie and Ford Chance on a farm in Cobb County: 1941"