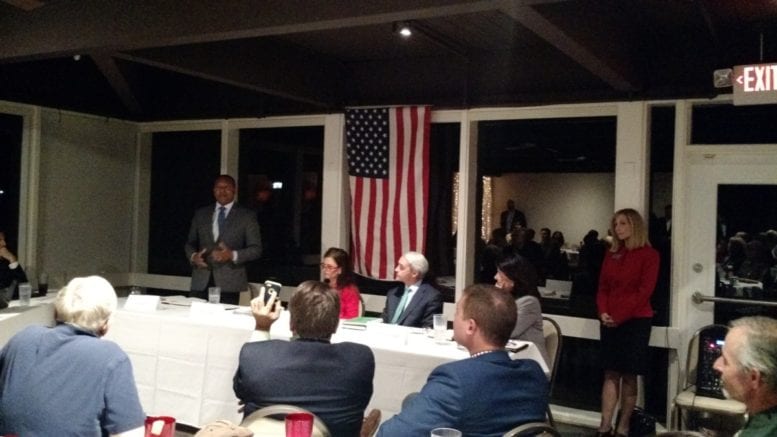 The Georgia Senate District 6 election is crowded with nine candidates vying for the seat, but the herd was thinned somewhat at Wednesday night’s Republican-only forum held at the Cross Creek Golf Club cafe in Buckhead.

There are five Republicans and four Democrats aiming to replace Hunter Hill in the Senate. Just four of the GOP candidates shared the stage, however, due to the absence of Smyrna attorney Matt Bentley.

The “Face-Off in Fulton” was moderated by local journalists Everett Catts and Greg Bluestein, who chose questions for the candidates to answer ahead of the Nov. 7 election.

Questions ranged from poverty to schools to business, but the most touched-upon subject was traffic and public transit. Each candidate acknowledged how vital it is for Atlanta to ease its traffic problems and posed their own solutions for how to do so.

Aldridge placed her faith in technology, saying self-driving cars are no longer the stuff of science fiction and will be on our roads within 10 years, which could render any transit upgrades obsolete. She also said other smart technology, such as smart red lights, will play a role, as will expanded toll lanes on local interstates.

None of the candidates openly embraced rail expansion for MARTA, Atlanta’s oft-maligned transit system which doesn’t extend into Cobb County, even though businesses such as Amazon have identified mass transit as a key factor in business relocations.

Fiveash suggested that it’s important to adopt a traffic plan that “won’t repel Amazon,” and said rural legislators have traditionally had control over the state’s transportation planning, which should be handed over to metro Atlanta legislators.

Smith, formerly the Georgia Republican Party’s Minority Outreach Coordinator, said there is no point in raising taxes for programs like MARTA if it doesn’t lead to increased ridership, but also described expanding highways as “outdated.”

All of the candidates advocated slashing Georgia’s state income tax, perhaps not surprisingly since District 6 includes high-income areas like Buckhead and Sandy Springs. The only difference was that some candidates wanted to simply lower it, and some want it eliminated entirely.

Eichenblatt said state income tax should be lower, but shouldn’t be eliminated entirely.

“I don’t think zero is possible,” she said, noting that Georgia’s finances are in excellent shape and need to remain that way.

Aldrige also proposed capping how much Fulton County property assessments can be raised in any given year at 3 percent, adding “job number one for me is lowering your taxes.”

A similar question concerned the use of tax incentives to lure businesses, with Amazon again mentioned.

“My job as a Senator is not to look at Amazon, Amazon, Amazon,” Aldridge said. She added that tax breaks are healthy and beneficial, but should also come with sunset provisions so they aren’t extended indefinitely.

Smith spoke about the reasons he chose to live in Smyrna, such as its low property taxes, and said Amazon is likely considering some of the same factors in its search for a second headquarters. But he expresses skepticism about the “war of states” created by the company’s search for a second headquarters, and even wondered aloud if Amazon could be actively playing states off of each other.

Echoing a question from the first forum, Blustein asked each candidate if they would support so-called “religious freedom” bills which have been discussed locally and passed in Indiana and North Carolina, sparking national controversy. He again mentioned Amazon as one business Georgia could lose if it passed a similar bill.

Three of the candidates expressed opposition, with only Smith saying he’d support a religious freedom bill. Smith said he’d support the bill in order to prevent discrimination against not only Christians but Muslims and other religious groups. The comments drew applause from the crowd.

The candidates were also asked about the potential for casino gambling in the state. Fiveash said he has initially opposed the Georgia Lottery, which he viewed as a tax on the poor, but has come around to support it because of the HOPE scholarship. He said he’s similarly opposed to the casino idea, but is open for debate and discussion.

Aldridge said she supports letting the public decide in a referendum, though she’s personally against casinos after seeing their impact while living in south Florida. Smith also said he’d support a public referendum, though he doesn’t personally favor casinos, and that it’s important to utilize incentives to teach poorer communities concepts like banking and savings accounts.

Eichenblatt described casinos as a “very shaking building block” of the economy, and said she’s against them personally but would support a referendum.

“It’s not a good enough building block for our community,” she said.

The candidates were also asked about increasing the minimum wage. Democratic candidate and attorney Jen Jordan is promoting a $10.10 minimum wage as part of her campaign. Not surprisingly,  none of the Republicans onstage supported the idea.

Smith talked about how he was able to raise his own minimum wage through job skills, while Aldridge cited the strain higher minimum wages create on businesses. She said it can lead to layoffs, defeating the intended purpose.

“There’s no magic pot of money employers have for this,” she said, before pointing out that 50 percent of minimum wage workers are age 21 or younger.

Fiveash said he favors workforce development programs over minimum wage hikes, and Eichenblatt said there are too many regulations already that businesses must follow.

“This would be a burden on small business owners.”