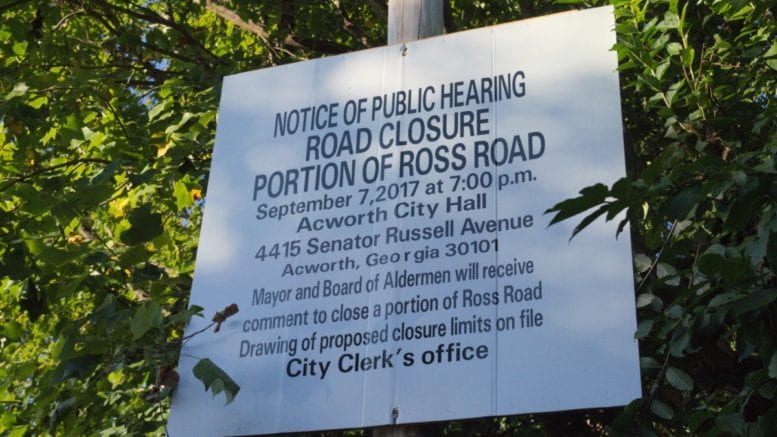 [Editor’s note: we’ve changed the headline because we thought the original one could be construed as taking sides in this issue.  That was never our intent — Larry Felton Johnson, Editor]

One tiny back road in Acworth has halted a development and spurred two different lawsuits involving several local governments. It also led to Acworth putting a locked gate on the road, blocking the only access to the landowner’s property.

Ross Road stems off Highway 92 behind an abandoned shopping center and dead-ends into property adjacent to Interstate 75. While the city of Acworth owns Ross Road, that property is in Bartow County.

Roswell resident Wayne Norman owns about 23 acres of that land in Bartow County, and he has been working with a developer to build a high-end, 380-unit apartment complex on the property. Norman applied for a rezoning application for his property over the summer.

This sparked a dispute over Ross Road, which has culminated in two different lawsuits. First, Norman and his attorney sued the city of Acworth for shutting down Ross Road. Then, Acworth officials sued Bartow County to appeal its decision on the rezoning application. 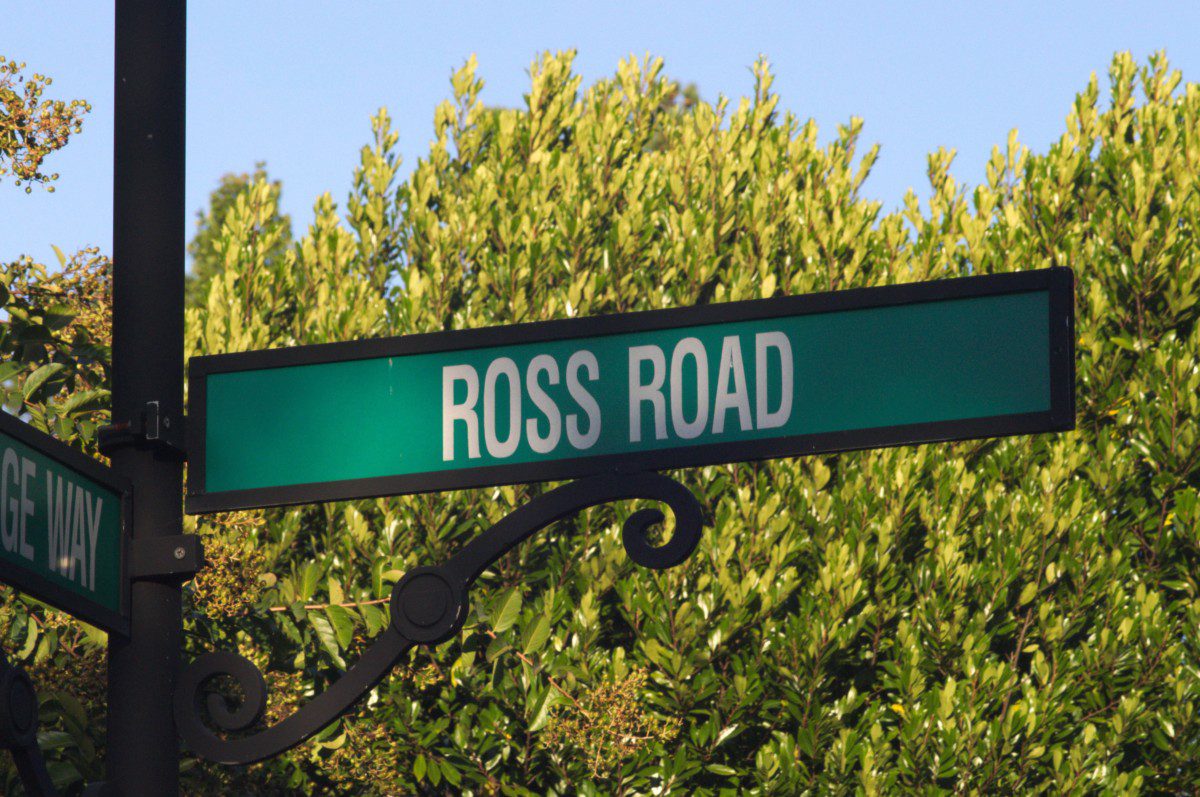 Both Sides of the Story

In an interview with the Courier, Acworth Mayor Tommy Allegood told why city officials do not want the developer to use Ross Road.

“The actual road itself is just all run-down, dilapidated, is substandard,” Allegood said. “There’s no reason for anybody to go down there.”

Allegood pointed to the city’s estimate that 2,300 cars will travel on Ross Road if the apartment complex is approved.

He did, however, offer an alternative.

“What we were saying was, ‘You get access through Bartow County, or let’s figure out a way to develop the [old] K-Mart property and give you access through that,’” Allegood said.

Referring to the large abandoned shopping center adjacent to Ross Road, he admitted that the old K-Mart property is being used as a bargaining chip in the issue. The city wants to see the whole area developed, he explained, especially if it’s using Acworth taxpayers’ dollars.

A prior Acworth alderman, Cobb County Commissioner Bob Weatherford, also weighed in on the issue.

“Basically they [the property owner and developer] went in and tried to sneak it in without talking to any of the parties involved,” Weatherford said.

He argued that the biggest problem was the lack of communication, which was pivotal since the access point was not in Bartow County.

But Norman and his attorney, Travis Hargrove, believe this issue is much simpler.

“If Ross Road is closed, there would be no access to my client’s property,” Hargrove said during public comment at an Acworth aldermen meeting.

Despite how city and county officials feel about the development, Hargrove and Norman believe that has no bearing on the status of Ross Road as a public road.

In the public comment section, Norman said the “wrath of a few” had caused him to lose access to his own property.

Haynie cited the condition of Ross Road and its unsuitability to handle emergency vehicles or school buses. While no traffic study was conducted for this development, city officials found another study for a smaller complex and extrapolated the number to get their own estimate. Haynie said that, by using this approximation, about 2,300 vehicular trips would travel over Ross Road each day.

Despite these concerns, Bartow’s planning commission recommended approval of the rezoning application.

Cobb County also threw its hat into the ring. Cobb Chairman Mike Boyce sent a letter to Taylor on July 11, one day before the commissioner was scheduled to vote on the rezoning application. Boyce used many of the same arguments that the Acworth city attorney mentioned, adding that improvements may also be needed at the intersection of Ross Road and Highway 92, which is a state route.

“From what we have seen to-date, the developer has not coordinated with the city of Acworth or Cobb County to address the need to improve Ross Road to accommodate the substantial increase in traffic the proposed development would produce,” Boyce wrote in the letter.

Boyce declined to comment for this article since there is still pending litigation.

According to the minutes from the public meeting on July 12, Taylor voted to table the issue until Bartow County’s next meeting to give all parties time to resolve their concerns. On Aug. 9, however, the same reservations about Ross Road were presented. Taylor ultimately decided that the developer would need to find a solution with the city and the county, according to meeting minutes, and he approved the rezoning application.

Commissioner Taylor did not respond to repeated requests for comment for this article.

Brandon Johnson, Bartow’s zoning administrator, did clarify a few elements of the application approval process. While some argued that a traffic study should have been completed, Johnson said the county does not require one and typically doesn’t ask for a traffic study until the development phase. He confirmed that Ross Road is currently the only access.

“The applicant would have to work out those details with the city of Acworth,” Johnson said.

He also responded to the idea that access to the property should be Bartow’s responsibility, pointing out that there are a few other places in the county that are accessed by roads in other municipalities.

“That does happen every once in awhile,” Johnson said. “It’s not ideal.”

While the rezoning application was being considered, Acworth officials. Haynie, the city attorney, exchanged many letters and discussions with Norman’s attorney over the locked gate. In a letter dated Aug. 11, two days after the rezoning application was approved, the city attorney laid out the conditions for giving Norman access to his own property.

“Your client will not be allowed to give the key to or to authorize any representative or employee of Lynwood Development Group, LLC to access the property,” Haynie wrote in the letter. “It is important to restate that the city of Acworth will not under any circumstances allow access by the proposed 380-unit apartment complex.”

Norman and his attorney Travis Hargrove filed a lawsuit against the city of Acworth Aug. 17 and presented the lawsuit at the Board of Aldermen’s meeting that same evening. One of the agenda items for the night was a vote on whether or not to begin the process to officially close a portion of Ross Road.

“There had been representations that were made that the road was closed to Bartow County and to me,” Hargrove said during public comment. “And apparently that is not the case, because today y’all are discussing whether to close Ross Road.”

Hargrove addressed the mayor and board members about what he considered misconceptions.

“There was discussion at a prior meeting in Bartow County that there was other access to my client’s property,” Hargrove said. “That’s simply not the case.”

He also referenced the letter from Haynie, the city’s attorney, dated Aug. 11.

“We asked for a key to get in the gate, and we were given conditions as to whom we could or could not grant access to our own property to,” Hargrove said. “Those were not acceptable conditions to my client.”

Norman also addressed the board and said he was upset that no one contacted him before putting a lock on the gate to his property.

After the board of aldermen met behind closed doors in an executive session, they voted unanimously to begin the process to close the portion of Ross Road that leads to Norman’s property. The board held a public hearing on Sept. 5 and officially closed the road. 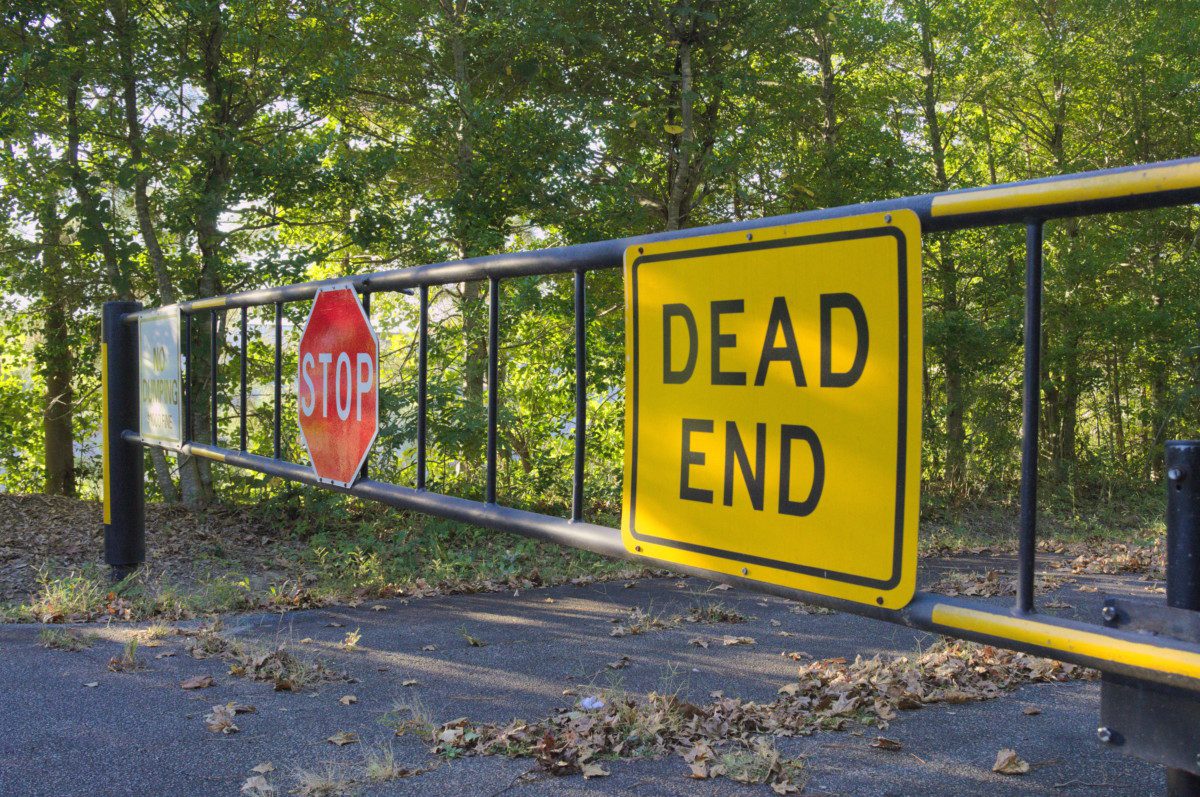 No current info on Mike Boyce’s condition, but reportedly doctors to meet with family by today