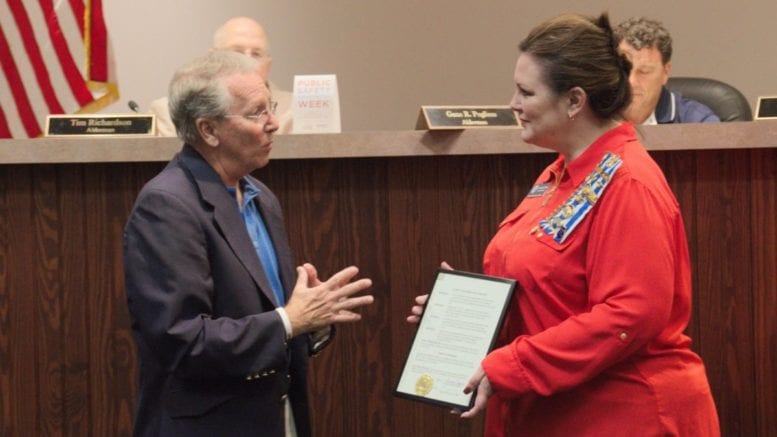 Acworth Mayor Tommy Allegood gives a proclamation to a member of the Daughters of the American Revolution during a public meeting Thursday, Sept. 21, 2017. Allegood veered off script during his presentation to ask the resident about her various pins and awards and to explain why she personally joined the organization. (Sierra Hubbard / JEM Capstone)

ACWORTH, Ga. (Oct. 30, 2017) — When Acworth’s mayor and aldermen talk about the city they serve, several words pop up in all of their conversations.

They mention ideas like “quality of life,” the “direction of the city,” and downtown development. Many of the men who lead Acworth use a lot of the same language, and there’s a likely reason: they’ve worked together for nearly 20 years.

In September, the board canceled its scheduled general election, since the three incumbents faced no opposition candidates. This marked the fourth consecutive general election that the city canceled since all officials ran unopposed.

Mayor Tommy Allegood believes the citizens continue to support him and the aldermen because of the work that they’ve done over the years.

“It’s because we created this growth, this very sustainable growth pattern,” he said. “You create the quality of life, that’s the place that businesses and people want to come to and invest.”

Allegood has been in office since 2002 but served on the city council before that, bringing his service to a total of 18 years. Aldermen Tim Richardson and Butch Price have both been in office for 20 years, and two more aldermen were elected 12 years ago.

Five out of six positions on the Acworth Board of Aldermen have been filled by the same five men for 12 years.

From a Political Science Perspective

Dr. Kerwin Swint is the chair of political science at Kennesaw State University.

“What’s unusual about this situation, it sounds like, is that they’ve served so long together,” Swint said. “There’s usually a little more turnover than that, but it’s not unheard of.”

He pointed out that there could be many reasons for the lack of opposition that Acworth’s officials have seen, in addition to the idea that citizens are pleased with their work.

“For local part-time offices like that, generally there’s not a lot of competition,” Swint said. “It may not be seen as very influential.”

It’s likely too, he said, that residents just don’t have many complaints. Swint said there are many advantages to having several board members work together for so long, like a better understanding of how the city functions, but he also noted that there can be downsides.

“The only danger would be if they become unresponsive or too rigid and they don’t listen to input,” he said. “They just have to be flexible enough to make adjustments if they need to, and it sounds like they are.”

While he said it seems like residents are happy with their leadership right now, Swint explained that the situation could change as the city continues to grow and attract new people.

“In a lot of communities that are growing like that, you will have either younger people or newer residents will run for office and sometimes challenge the older power structure,” Swint said. “It sounds like that hasn’t happened that much yet in Acworth, but it’s probably inevitable at some point that it will.”

The seniority of Acworth’s board is also unique because of its proximity to Atlanta. The nearest local government with a similar structure is Ball Ground, which is 50 miles north of Atlanta. According to the city’s website, Ball Ground’s newest council member has served for seven years, and its most senior member was first elected in 1992. Mayor Rick Roberts has served the city consecutively since 1996 and for another five years prior to that.

While the council’s longevity of service is similar to Acworth, Ball Ground is much more rural and isn’t situated in a highly populated area like Cobb County.

Swint, the political science chair at KSU, said Acworth is still seen as more of a rural community that has retained much of the qualities that accompany a smaller city.

“It just happens to be near a high-growth area in a high-growth county,” Swint said. “But I think the politics and the civic environment is still sort of a small-town rural feel, and I think that helps explain why people are comfortable with this particular board of aldermen.”

Alderman Brett North is the newest board member, elected in 2014 to succeed Bob Weatherford, who left to join the Cobb County Board of Commissioners.

“Commissioner Weatherford used to say that Acworth was a lot like Mayberry, only on steroids,” North said, laughing. “And that’s probably a pretty good analogy.”

North agreed that Acworth has maintained a small-town feel, and he believes that the attitude of the board has reinforced that.

He explained that, while every board member may not always agree on each decision, they still respect everyone’s place at the table. Someone may not support a measure, but other board members do not attack them or retaliate.

“I think that that within itself can build distrust and discontentment with the citizens, and that’s just not something that they see from us,” North said.

The New Guy in Town

Being the newest elected official, North said he has learned plenty from working alongside the veterans on the board, and he never feels intimidated or overpowered.

“My vote is just as strong as theirs, and we work well together,” he said.

North believes there are endless advantages to having a city council that has served together for so long.

“The advantage to the citizens, of course, is experience that they have gained and the knowledge that they’ve gained over the years that they’ve been in office,” North said.

He also thinks canceling the last four general elections is a testament to the trust that the residents have placed in the board and proof that they’re happy with what the city leaders are doing.

“We see that in correspondence that we get from the general public, we see that in town hall meetings that we hold and in public comment in our meetings,” North said. “I still, three and a half years into [the job], pinch myself every now and then.”

As mentioned earlier, the seniority of Acworth’s board is odd because it’s part of metro Atlanta. While it may still feel like a rural community, Acworth’s surrounding cities have seen more typical turnover in their government structures. Three of Woodstock’s council members have served for less than five years, according to the city’s website. Kennesaw’s city clerk confirmed that no current council member has been in office for more than six years, and Kennesaw Mayor Derek Easterling is only in his first term, which began in 2016.

For the most part, Marietta’s city council reflects the typical structure, with one outlier: Philip Goldstein. First elected in 1980 at age 21, Goldstein was the youngest councilman in the city’s history.

“Even though I’ve been in office for more than 37 years, I’m still learning,” Goldstein said.

He pointed out the many advantages to serving for so long, including what he referred to as “institutional history.”

Some of those “players,” Goldstein said, might include other departments or government agencies, like the state or a neighboring municipality. He also said it can be helpful to recall plans or ideas that have already been tried in the past.

“You might have had that experience where the city has done that before, and it didn’t work out well,” he said.

While there are advantages to serving in office for a long period of time, Goldstein did not discredit the importance of newly-elected officials as well.

“It’s good basically to have a combination of both,” he said. “When you’ve got a good-working team, your city typically runs well, and there’s certainly an advantage to that when you’re trying to get things done.”

For those who have served for a while, he recommended connecting with the Georgia Municipal Association or the National League of Cities to take courses and participate in workshops.

“It’s a way to not get out-of-date,” Goldstein said. “You keep a fresh perspective on issues.”

“When you have sustainable leadership, then the plan doesn’t change,” Allegood said. “Everybody remains on board. Even though you might have one seat here or one seat there that changes, the consensus is always about redevelopment and the direction of the city.”

Because of Acworth’s “sustainable leadership,” Allegood pointed out that the board has maintained a low property millage rate, attracted more businesses to the city, and revitalized the downtown area through a plan that has spanned more than 15 years. Plans like that, he said, come to fruition with boards that serve together for so long.

“You create this really unique place where people are really satisfied with the leadership, they love living where they live, and businesses come,” Allegood said. “Then you wind up like the city of Acworth.”

2 Comments on "Why do Acworth elected officials remain in office so long?"