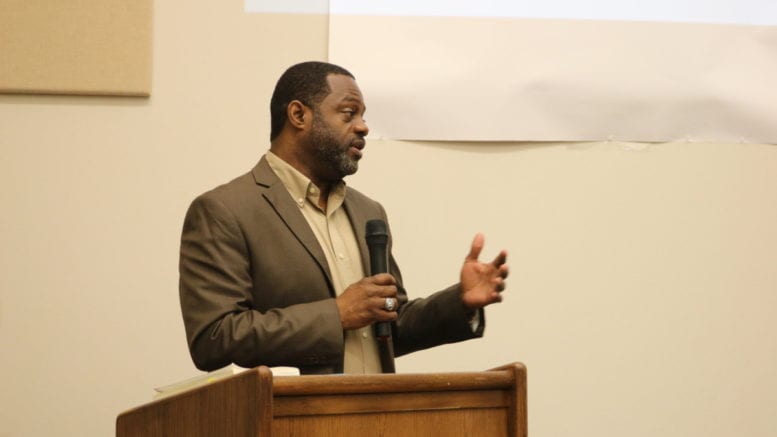 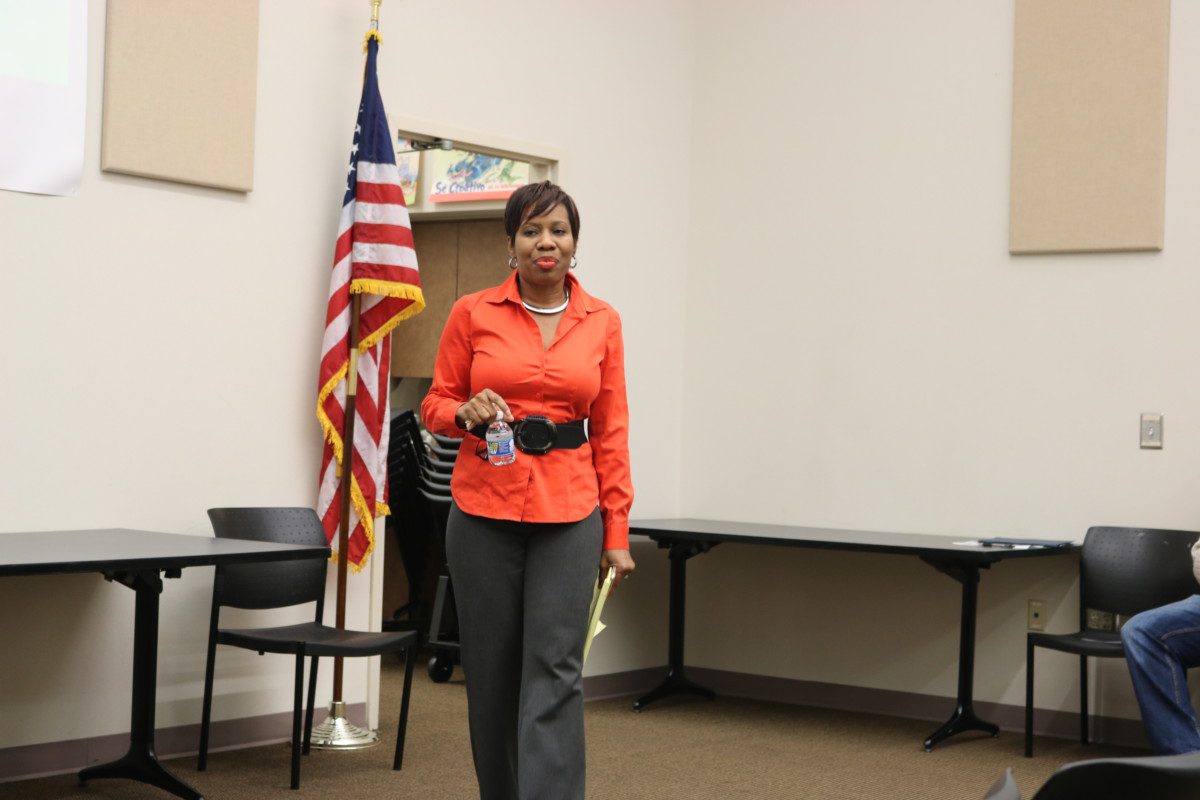 Monique Sheffield, who introduced the event, described the gathering as a South Cobb Alliance cityhood Information session.  She said, “Currently, we are researching whether it is a viable option for us to consider cityhood, so in that, we will be able to gain greater control of the resources and the taxes that are coming into our community.”

She called Tre’Hutchins to the podium and introduced him as the person spearheading the effort.

Hutchins said that the organization is gathering information from cities that have already recently incorporated, such as Tucker and South Fulton. “There’s not one person that can say, ‘This is what we’re going to do’. We’re not a pro-cityhood organization, we’re not against it. All we’re doing is coming together and getting enough information … and see if it’s something we can be thinking about. This is a pretty good mix of residents from what looks like all the surrounding area,” he said.

He held up a copy of Creating the New City of Sandy Springs: The 21st Century Paradigm: Private Industry

by Oliver Porter, and recommended it.  Porter was the interim city manager of Sandy Springs after it was incorporated, and was one of the leading figures in developing that city’s approach to city formation, which relied on contracting many city services to private companies.  The book outlines the requirements for incorporation and describes in detail the decisions and actions Sandy Springs residents took.

Hutchins said, “This is what we’re reading, this is some of the literature that we have been using as a guide for the future. As many of you know, Sandy Springs was the first city to incorporate in almost 50 years.  It took them almost a 20-year process to even get to the place of incorporating and being that first city.  This was their map, this was their guide, so I would encourage everyone to get this book.” 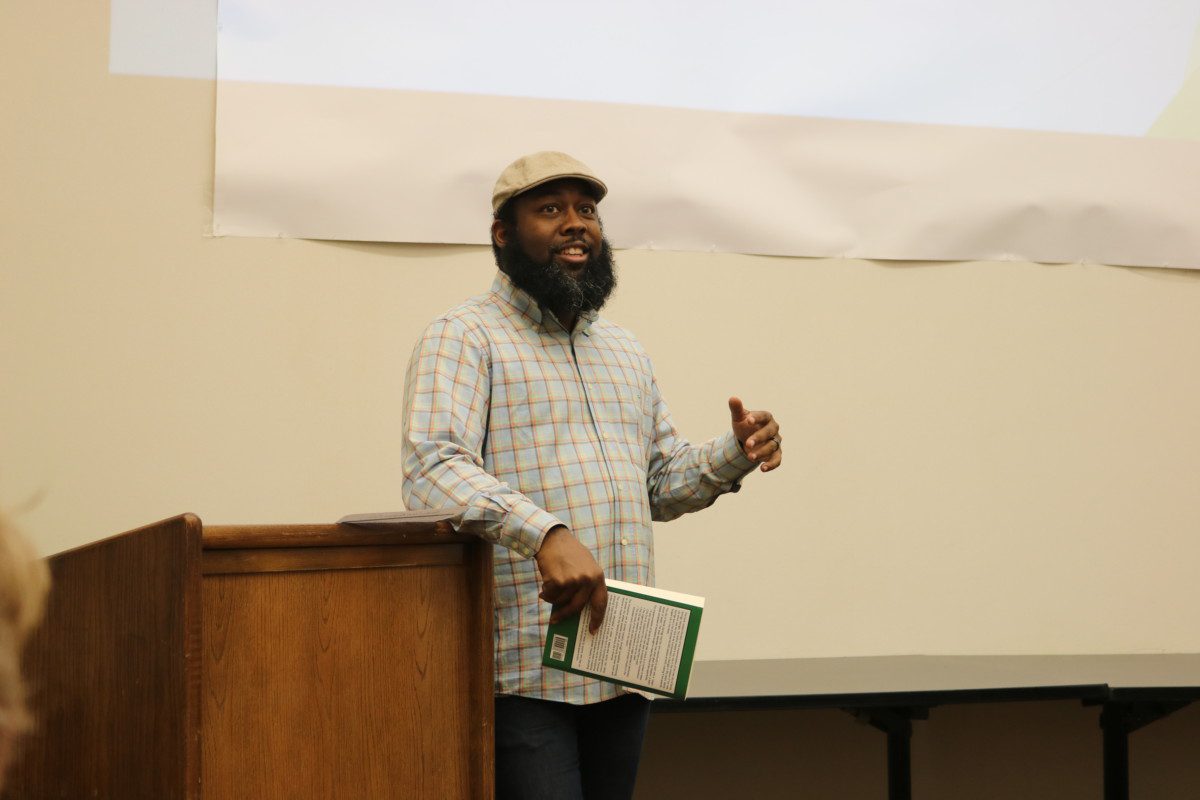 The guest speaker was Corro’ll Driskell.  Hutchins said Driskell was involved in South Fulton incorporation from the beginning and could tell the audience about the ups and downs of the South Fulton cityhood efforts.

Driskell asked Dominique Huff to stand at the podium with him to speak and answer questions.  Driskell said that Huff had written about the incorporation of South Fulton, and could give additional information about the options on cityhood status. Driskell said, “He was strategic in working with us on the initiative to educate the residents of, at that time, unincorporated South Fulton.” 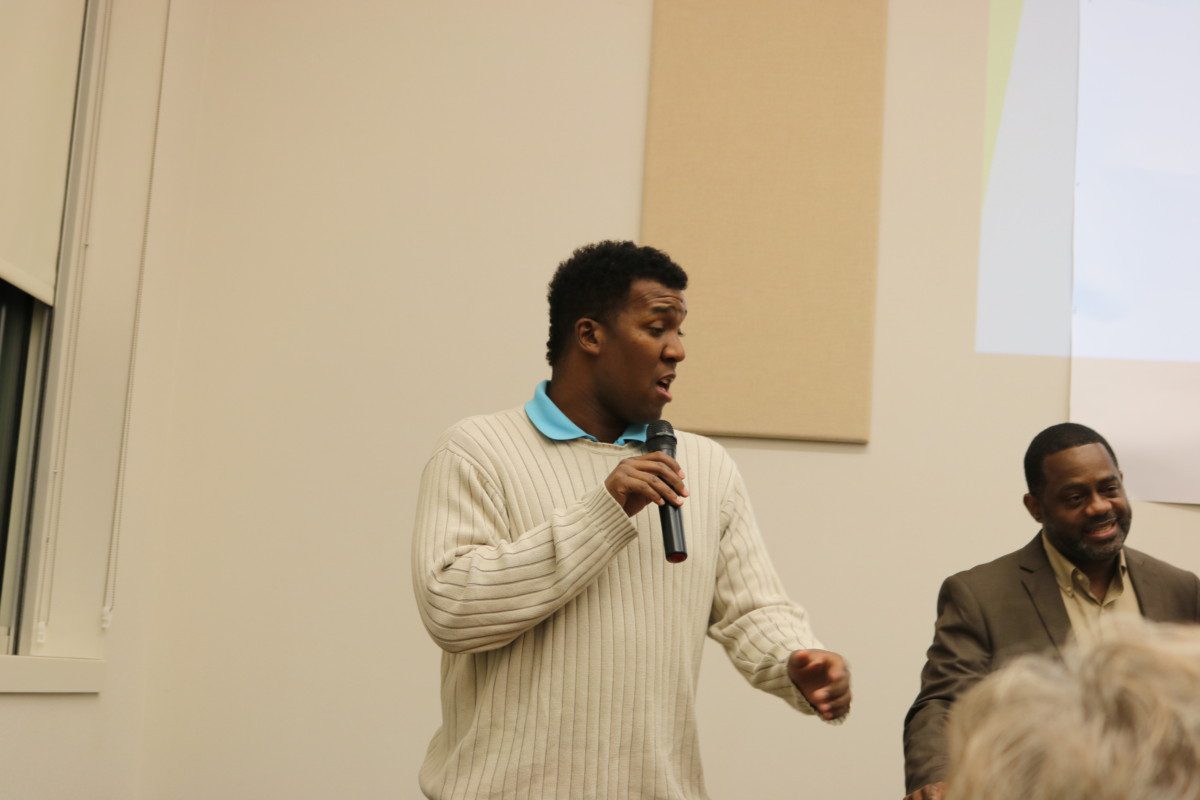 Huff said that people considering cityhood should keep in mind they have three options: to let things stay as they are, get annexed into an existing city, or to incorporate into a new city.

Driskell said that when negotiation with the county over service agreements is being planned, politicians are not the best people to talk to.  He said talking to the county attorney would be better.  He said residents should file open records requests to the county to get information about how money is being spent in the area.  He said that economic development plans, intergovernmental agreements, information on the drainage and sewer systems, and service agreements with private companies for work in the area are all important information for residents to have to make a decision about whether cityhood is a viable option.

He talked about the importance of a comprehensive feasibility study, required by state law, and the need to have a realistic budget.  Using police services as an example, he said that contracting for police services with the county might be the way to go for a newly formed city, but that residents should decide how many police are needed, and reflect that in the budget.  If the policing the county provides in the agreement is not adequate, further funds would have to be arranged by the city itself to increase the number of police officers.

The speakers mentioned that among the issues that will need to be addressed during the transition are the schools, police services, fire departments, and parks.

When an audience member asked what would happen if the new city’s emergency services got overwhelmed in the event of a major disaster, Huff said that intergovernmental agreements are in place, so that if a nearby jurisdiction can’t handle a particular event, help is provided by departments from other areas.

Huff said that if incorporation is successful a transition committee would be set up, appointed by the governor, to negotiate the division of services between the county and the city.  He said members of the transition committee are not allowed to run for office in the new city because they were privy to too much insider information that would give them an advantage in an election.  He praised Brookhaven’s committee for its balance between residents representing different views on cityhood, but said, “Unfortunately in South Fulton we had a whole bunch of partisan hacks.”

He said that when different interest groups in the area considering incorporation are approached, some will be supportive of incorporation and some will be hostile, “Asking people to change their government is going to be one of the hardest things you’ve ever asked people to do,” he said.

At the end of the meeting, Hutchins said that raising funds for a feasibility study would be a priority of the South Cobb Alliance and that more informational meetings would be planned.

Mableton was briefly incorporated from 1912-1914.  Its current status is Census Designated Place (CDP).  After Brookhaven incorporated in 2012, Mableton became the largest CDP in metro Atlanta.