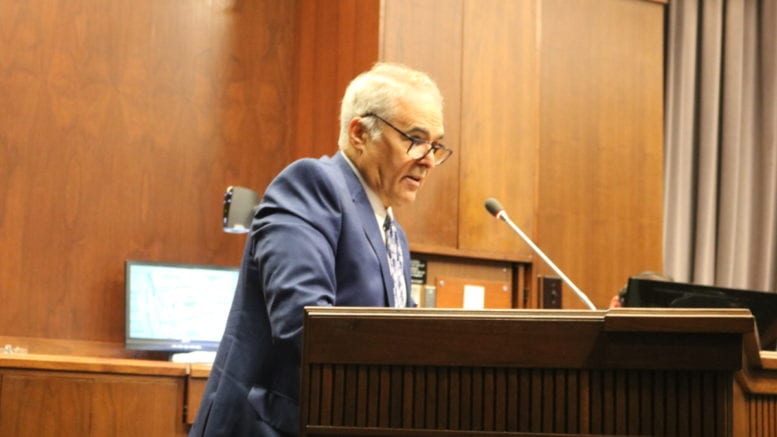 Atlanta Road mixed-use development near I-285

The Cobb County Planning Commission has postponed recommendation on a mixed-use development off Atlanta Road that would include an apartment building with 304 units and 10,075 square feet of commercial space. The reason for the postponement until the commission’s August hearing is to explore possible solutions to traffic concerns.

The property is at 1250 Winchester Parkway near I-285 and alongside the WellStar medical facility. The applicant, Winchester Parkway, LLC  requested a rezoning from Office & Institutional (O&I) category to Urban Village Commercial (UVC). The zoning case number is Z-37.

The rezoning would allow the developer to build high-density apartments along with low-intensity commercial and office space.

The average size of an apartment would be 900 square feet.

The county zoning staff recommended that the plan be approved because the future land use for the area in the county’s comprehensive plan designates it as a Neighborhood Activity Center (NAC).  According to the document prepared by the staff, “mixed-use developments, medical office and professional office uses should be encouraged in the Community Activity Center and Neighborhood Activity Center areas. Allowing mixed-use developments and professional office uses will assist in creating new residential and employment opportunities as well as reduce traffic congestion and improve traffic flow by reducing total number of trips on the overall transportation system.”

Presentation from the applicant’s lawyer

Parks Huff, the attorney for the applicant, began by describing the location of the property, and his reasons for requesting approval.

“It is right up against 285, just north of Atlanta Road. The staff reviewed the application and has recommended approval of the application and I think there are several reasons for that, and in fact it was on the consent agenda, except for the opposition here, and I’m going to address that in a second.  But I think the reason why they recommended approval of the application was the fact that you have Regional Activity Center all around this property. On the opposite side of 285, north and south, along our side of 285 is Regional Activity Center. This use right up against 285, right close to the work center with the WellStar complex just west of the subject property … it makes sense.”

He said that housing was needed for workers in the area. “This is an opportunity to put housing in close proximity.” He said the reason rental property was appropriate to the area is that “you tend to live really close to where you work when you rent.” He said the current market for rental property favors one-bedroom apartments.

He showed slides of the existing property and renderings of the proposed development.

“This is the existing development on the property,” Huff said. “It’s an old office development, and it is past its useful life.  And so what we’d like to do is to reinvigorate it.”

Bob Feldberg, who owns Repro Products, a company on Atlanta Road at Winchester Parkway, opposed the rezoning request, because of the impact of traffic on the access to his property.  He said he started the business 39 years ago out of an apartment.

Feldberg constructed his building on Atlanta Road in 2001. “At that point in time that building was, I would say … I wouldn’t call it landmark, but it was certainly an oddity for what was on Atlanta Road at that time. It was very easy at that time .., to come in and out of my front entrance, that faces Atlanta Road. In other words, I could easily get to the light at Pine Street, and I could make a U-turn, and I could get to 285.”

His salespeople and service technicians have activities “predicated on time,” and need to be able to get to 285, he said.

He said most of his clients, technicians, and salespeople need to go south toward I-285, so they have to go north to the Pine Street traffic light and turn around. He said, “Now, my ingress/egress becomes Winchester Parkway.”

A recent traffic study had rated Atlanta Road’s conditions at that location as an “F plus,” he said.

He gave his objection to approving the applicant’s request.

“All that traffic is going to back up, in the mornings, on Winchester Parkway.  We are not going to be able to get out of our own parking lot.  We’re going to become landlocked,” he said. “The traffic flow has increased exponentially.  There’s no traffic lights to slow (drivers) down when exiting I-285 until they reach Pine Street, which is beyond our business.  (With) the widening of the road in addition to this onslaught of additional traffic, getting in and out of our main egress to Atlanta road has virtually been cut off from going some other way than to rely on Winchester Parkway.”

“I like progress.  I’m in support of it. I understand the highest and best use of the property, but the issue really is access: ingress and egress from Winchester Parkway, and not just for those who come in to develop, but (those) who’ve been there for 39 years,” Feldberg said.

He said a possible solution was creating an access to Cumberland Parkway.  WellStar controls the property that would make that access possible.  Huff said that the applicant had approached WellStar through a third-party to talk about possible solutions to traffic flow problems in the area, with no success, but that the applicant would be willing to try to approach WellStar again.

Andy Smith, the planning commissioner representing the district, made a motion to postpone the further hearing on the request until August, and it passed 4-0.

More lane closures on I-285 in Cobb this weekend

Fatal accident on I-285 in Cobb County