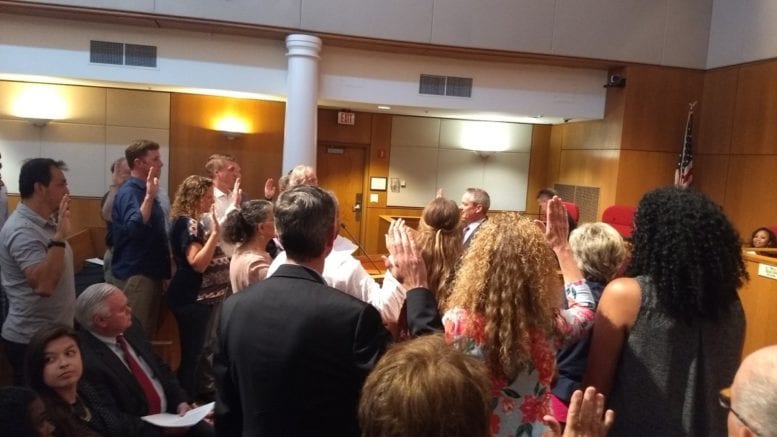 Cumberland Community Church is in the midst of moving to a new building, but will have to do a lot more work to sell its old one after the Smyrna city council denied a rezoning request Monday night.

By a vote of 3-1, the council rejected a rezoning that would have allowed for 325 apartments to replace the old CCC building on Sports Avenue. The church wished to sell the property to JLB Realty, which would develop mostly multifamily units, but the sale will not happen without the needed zoning.

JLB’s application called for 325 apartment units, 3,000 square feet of retail in the form of a coffee shop and 7,000 square feet of “live/work space” in which a resident would live above an office to use for business. JLB described it as a mixed-use development fitting the city’s wishes for the property, but just 3 percent of the proposal was for anything other than apartments. The 12.5-acre site is currently zoned general commercial and would need to be rezoned as mixed-use conditional.

“Smyrna residents deserve better than this,” said Derek Norton, who represents the area on the Smyrna City Council. “We get one chance to get development and redevelopment opportunities right, and I don’t think this is it… I’m okay with waiting until the right project comes.”

CCC is relocating to a new facility at the corner of Church Street and South Cobb Drive and members of its congregation created a standing-room-only situation at city hall. There were more than 90 minutes of public comments on the proposal, much of it from church members urging the council to allow the apartments.

A resident named Scott McDearman presented what he said was a petition from community members opposing the proposal, and added that Smyrna already has “excess apartment capacity” that threatens to overload local schools.

But church members turned out in large numbers as well, expressing their support for the project. CCC staff member described the renderings as “gorgeous” and said she couldn’t wait to see them.

CCC members also said the church does a lot of community service in the area, that they had given it much thought and prayer, and many also noted that the property sits off the road and thus will be difficult to develop for retail.

Smyrna Mayor Max Bacon tried to calm the large crowd ahead of the public comment portion.

“Zonings are very emotional,” he said. “Take a deep breath, relax and we’ll hear your testimony.”

Sure enough, there was plenty of spirited comment from both sides.

Multiple speakers mentioned that the church could have sold to another entity without a rezoning, but instead simply sold to the highest bidder.

Another speaker made analogy to painting stripes on a horse and calling it a zebra, which he said is what JLB was attempting by adding a small amount of retail “out in the parking lot” and calling it mixed-use.

Getting the plan approved was always going to be a long shot. Smyrna city staff recommended denial, and the city’s planning and zoning board voted unanimously to recommend against approval.

Staff mostly objected to the proposal because pure apartment developments have fallen out of favor in cities across Cobb County. Smyrna’s Livable Centers Initiative (LCI) study calls for mixed-use on the property, seeking a development similar to Jonquil Village or Belmont Hills. There were also several variance requests staff did not support.

In calling for a motion to deny, Norton said he appreciated the role Cumberland Community Church plays in Smyrna. At the same time, he said there have been discussions for over a year between the city, developer and the church, and that repeated requests for alterations to the plan from Smyrna leaders have been ignored. There was applause from the audience when the final votes were cast.

Councilwoman Maryline Blackburn cast the lone vote in favor of JLB’s proposal, saying she thought the project would be good for Smyrna.

“That, to me, would be a wonderful project. It would cater to young Millennials, to seniors who are looking to retire or to empty nesters,” she said. “It is mixed-use. However, I do believe the developer would have worked with us. I liked the product and I do believe that it truly would have been an asset to the Smyrna community.”