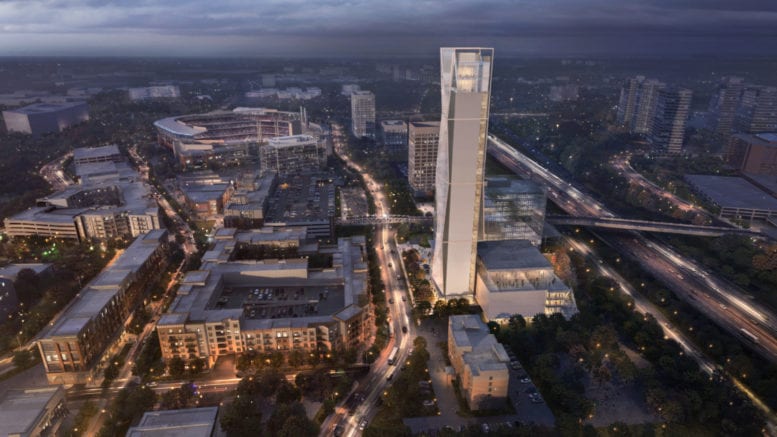 In July, county officials announced that thyssenkrupp, the international industrial conglomerate that is widely known for its elevators, is planning to build offices and a 420-foot quality control center on Circle 75 Parkway, near The Battery Atlanta and SunTrust Park.  The facility is expected to bring with it more than 800 jobs to the Cumberland area of Cobb County, with average salaries of $100,000 (thyssenkrupp’s own press release puts the number of full-time employees in the complex at more than 900).

The facilities are expected to reach completion in the winter of 2020.

Cobb County Commission Chairman Mike Boyce, quoted in a county newsletter, said, “So many people from the state to local levels have worked hard to make this announcement happen. We welcome thyssenkrupp with enthusiasm, and they will soon learn why Cobb County is a place where you expect the best and can safely work, live, play and pursue your dreams.”

thyssenkrupp has existing offices in county

The building represents a substantial boost to thyssenkrupp’s existing presence in the county.  The company has offices in Acworth, Kennesaw, and Marietta.  But according to the county’s email, the new facilities bring an estimated $264 million capital investment.

In the county’s announcement, Mike Plant, president and CEO of the Braves Development Company, which is developing the office tower said, “This complex will re-shape the Atlanta skyline and be a point-of-pride for Cobb County and our region. We are thrilled to have a top company like ThyssenKrupp join other businesses in and around SunTrust Park and The Battery Atlanta as the area continues to enjoy unprecedented growth.”

The press release from thyssenkrupp describe the quality control tower as follows:

“With 18 shafts, the Innovation complex test tower can be used to trial new concepts and product pilots, including high-speed elevators, the two-cabins-per-shaft elevator system, TWIN, as well as the world’s first rope-less and sideways-moving elevator system, MULTI. In addition, the test tower will also conduct robust tests to ensure compliance with stringent safety requirements on standard elevators.”

[Editor’s note:  There are at least two common capitalized versions of the spelling of thyssenkrupp in wide use.  We went with the version used in the company’s own literature, which includes only lowercase letters].