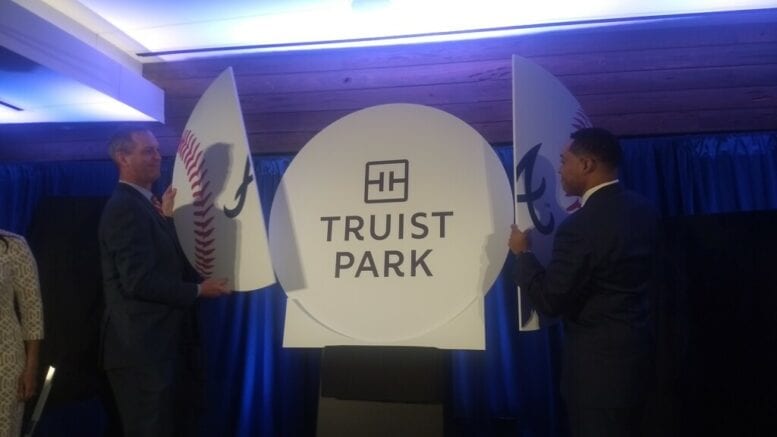 That seemed to be the Atlanta Braves’ stadium name philosophy as the club announced Tuesday morning that the former SunTrust Park would be rebranded Truist Park in keeping with the naming rights sponsor’s new identity.

Atlanta-based SunTrust Banks merged with BB&T in 2019, and the combined entity will be named Truist and headquartered in Charlotte. That necessitated renaming SunTrust Park, the Cobb County stadium that the Braves moved into in 2017.

While there had been talk that the stadium identity might be tweaked — perhaps Truist Field, Truist Stadium, Braves Ballpark @ Truist or some other variation — in the end the team and bank leaders stuck with the obvious choice.

“Obviously today is a moment that is all about the rebranding of this ballpark, and that’s not something we take lightly,” said Braves President of Business Derek Schiller. “It is something that is going to endure for the next 20-plus years. This partnership that we originally created with SunTrust is a 25-year partnership, and this is going to withstand the test of time as part of that.”

Schiller noted that the bank formerly known as SunTrust sponsored the Braves well before the current stadium opened, putting its name on a club area at Turner Field. The name “SunTrust Park” was unveiled at the new stadium’s groundbreaking.

Most of the large stadium signage has already been removed, and most of the new signage should be in place by the time the Braves face the Miami Marlins on Friday, April 3 for their home opener. Some smaller signage will continue to be updated throughout the baseball season.

Joining Schiller at the press conference was Donta’ Wilson, Truist’s chief digital and client experience officer, who said the first baseball game he ever attended was a Braves game. Wilson noted that Truist’s color will be purple , a combination of BB&T’s burgundy and SunTrust’s blue and orange, calling it a “purposeful purple.”

“We’re super excited to have all the signage change over the next couple of months,” said Wilson. “We’re even more excited about what we’re going to be able to do together.”