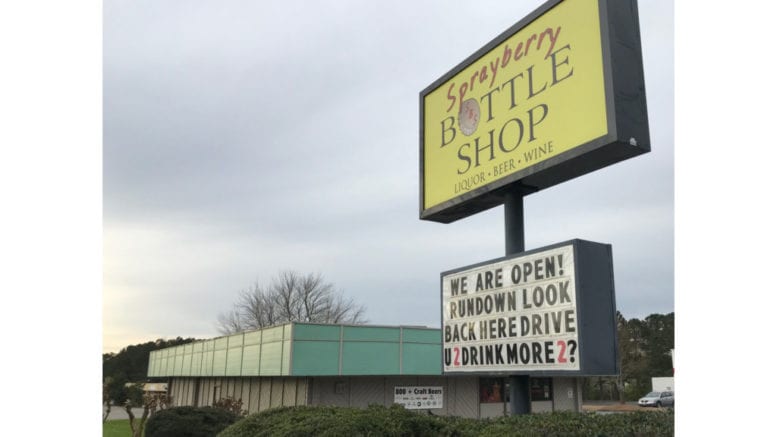 Brij Patel, director of marketing for Sprayberry Bottle Shop, has been vocal with his frustration over the condition of the adjacent Sprayberry Crossing property and the illegal dumping that takes place near his store. He put this sign up in conjunction with the planned social media campaign. (photo by Rebecca Gaunt)

After more than two years of trying to convince the owners to improve the blighted Sprayberry Crossing shopping center, community members say they have had enough. Members of the Sprayberry Crossing Action Facebook group, which has more than 4,200 members, are coordinating a social media campaign to draw attention to the problem.

The shopping center at 2692 Sandy Plains Road has long been a source of frustration for neighbors who say they have watched it decay for more than two decades. Several parcels of land make up the property, and the piece that houses the abandoned bowling alley was deemed blighted in magistrate court and subjected to the “blight tax,” a property tax up to seven times the millage rate, until the property owners make the required improvements.

Group leader Joe Glancy and Cobb County Commissioner JoAnn Birrell both say the property owners have not met all nine conditions of the court order, which had a deadline of September 15, 2018. The conditions included: Joe Glancy posted this photo on Facebook. Now other group members are adding theirs. (Photo courtesy of Joe Glancy)

In a post to the Sprayberry Crossing Action group on March 1, Glancy said, “Many of you have wanted to go directly after the owners for a long time and I have resisted for various reasons. I think over two years of repeatedly offering a path of cooperation has been enough. We’ll bring our message publicly to them. We’ll bring the story of the blight they’ve inflicted on our community to their communities. To where they work and live. We’ll do it respectfully and with class. I don’t think that’s unreasonable or unfair. They’ve had their chance to work with us, and we’ve lived with their negligence for over 22 years.”

Community members are taking individual pictures of themselves at the shopping center holding signs that convey something about the property. There is also an organized group picture taking place at 9am on Saturday. The photos will be collected and used for social media, press and public events.

Thomas Garland, executive vice president of NAI Brannen Goddard, didn’t respond to a request for comment as of the deadline for this article.

Pro-Immigrant Advocates Call for Resignation of Cobb School Board Member