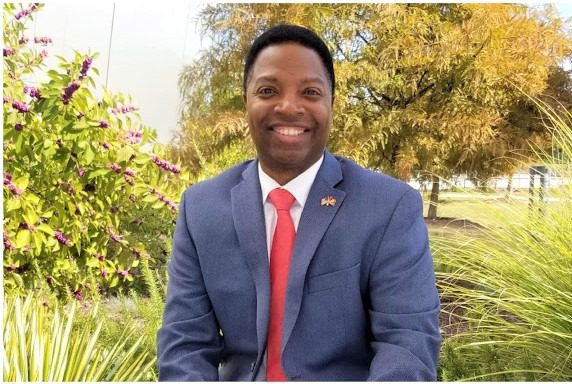 Owens spoke with the Courier at Aurora Coffee in the EpiCenter on Riverside Parkway late September, after he had announced his candidacy.

“I live in Mableton. I’ve got two kids in public school here over at Harmony Leland,” he said. Most people, at least in Cobb County, probably know me from my time as Chairman of the Cobb County Democratic Committee, where I came on a 2016.”

He said that when he took the position, “Cobb County turned blue when Hillary Clinton carried the county.”

“Prior to that I’m a third-generation Marine Corps veteran,” he said. “So I served eight years in the Marine Corps, primarily in communications and then engineering and some some combat engineering and training in counterterrorism. I went through boot camp in Parris Island, then went on to officer school in Quantico.”

Owens said his grandparents had lived in Cobb County, and that his relatives had lived “up and down Veterans Memorial,” formerly Bankhead Highway.

After earning a Bachelor of Science degree in Information Technology and Electronic Technology from North Carolina Agricultural and Technical State University, he received an Executive MBA from Georgia Tech and a doctorate in international studies from CalUniversity.

“My background is in technology, and especially cybersecurity and national security,” he said. “That’s the work that I do. You know, I have worked for a lot of Fortune 500 (companies), designing and setting up international networks and securing those dealing with geopolitical issues around data privacy and data security. It’s pretty much my wheelhouse.”

“I currently work at Equifax. I was recruited to come to Equifax after the largest cyber security breach in history,” he said. “They reached out to me to come and head up their U.S. operations for cyber security.

“My world is kind of colliding … with military, cyber security and politics, all kind of colliding into one space … because I also realize that I now have a unique skill set as it relates to those three things that’s desperately needed,” Owens said.

“I was invited to go to Ukraine last year to the Global Cybersecurity Summit as one of 16 cyber security professionals invited to go to Kyiv … and talk with Ukrainian officials about how to better safeguard their assets with Russia invading into Crimea and then shutting down their electrical grid pretty much at will,” Owens said.

“Most people saw the saw the hearing with Mark Zuckerberg,” he said, “And I was cringing through it to hear these legislators try to ask questions … without a real understanding of how the internet worked, or how applications function online and and how they’re monetized and how the whole structure works. It made me think about that commercial: ‘That’s not how any of this works’?”

“I talked about the work that I do in cybersecurity and FinTech (Financial Technology) and I see, throughout the northern corridor, right from Buckhead up through Alpharetta, where new companies come in,” he said.

“We have FinTech companies that are growing like mad in that area,” he said. “I look at what’s happening out east where now you have the Cyber Command Center right in Fort Gordon …”

He said, “And then I look at the 13th. And I go, ‘What’s happening in our district?’, you know, which I think has all the advantages in the world, all the opportunity that’s there. We’re in the backyard of the largest, most busy and efficient airport in the world.”

“We’re at the confluence of I-20, I-285, I-75, I-85,” Owens said. “Nothing goes through South Georgia without coming through 13. Nothing goes to Alabama (without) coming through the 13th. But yet, all that opportunity, and we it doesn’t seem like we’ve been able to seize any of it.”

“I want to talk to the Georgia Techs and the Emorys and KSU and GSU and work to build satellite campuses right in the district,” Owns said.

He said that, with the satellite campuses, young people who didn’t go to college right after high school, and older students who want retraining for a new career, could go to college near where they live.

“Because we all know with better education comes, those other jobs (that) can come into the district,” he said.

“So when I when I look around our district, I see these problems, I see opportunity. But at the same time, I don’t see anyone championing those opportunities that we have,” he said.

“I particularly think that there could be so much more development here in planned development, and at the same time, work on things like affordable housing,” he said. “They’re not diametrically opposed, to me. They’re not mutually exclusive. We can do both.”

“I think one of the greatest things I like about living in South Cobb, is that I think it’s probably one of the the most ethnically, racially, and financially diverse (places) in the entire area,” he said. “And the idea that we can have millionaires, and less than two miles away from there we’re screaming, “Can we please get affordable housing because people getting kicked out of apartments?’.”

“America is a ‘Land of the free Home of the Brave”, is the greatest country on in the face of earth,” Owens said, “And so it’s always going to attract people wanting to come here and be able to (live) the great American Dream, (to) come here with nothing in your pockets and being able to make something for yourself and for your family.”

“And We should continue to always be that beacon for the rest of the world. I think it’s vitally important.”

“But I think the tone in which … our current president came into office has exacerbated this problem in a lot of ways. That’s caused problems when you malign certain countries and when you denigrate the dignity of certain people who just want to come here to have a better life,” he said. “When you start off your administration by having a Muslim ban and xenophobia on front stage about what you’re going to do.”

“Here’s the problem we have. We do not have a comprehensive immigration plan. What we have is a plan based on not allowing black and brown people to come into this country. It’s as simple as that,” said Owens.

He said that the Trump administration had targeted the 13th District for a child detention center, and that he had not heard anything about it from incumbent Representative David Scott.

“I’ve given Congressman Scott praise for for having the vision, the initiative to have health fairs and to bring practitioners and companies to provide for people who do not have healthcare or who may have healthcare but the cost of premiums may be prohibitive for them so they (can be) healthier,” Owens said. “But at the same time, you have to ask yourself after 17 years of given annual health fairs ‘What is the next step?'”

“Because it’s a national debate this raging on right now about making sure that every single American has health care. Yet our Congressman has been silent,” he said. “Remember, the last congressional public town hall that Congressman Scott had was almost a decade ago. It was December of 2009. This was in the early days of the Affordable Care Act.”

“And I believe personally, that healthcare as a right. Healthcare should be one of those kind of inalienable rights that are given to Americans as citizens,” he said.

Racism and the criminal justice system

For more information on Michael Owens visit his campaign website.