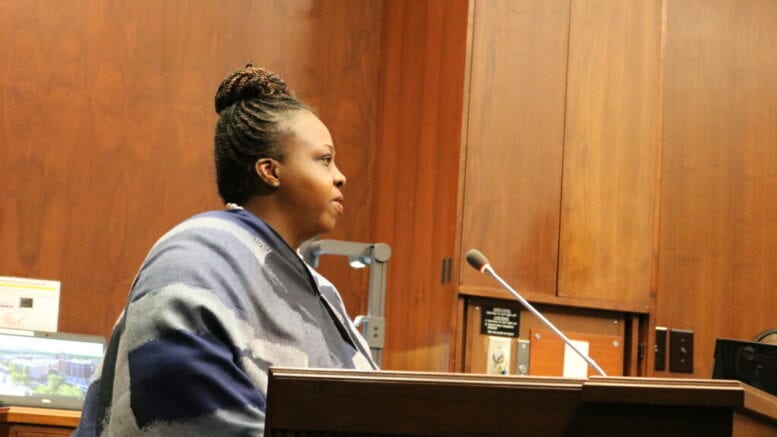 A group of Cobb County residents came forward during the public comment section of the December Cobb County Board of Commissioners meeting to support renters rights advocate Monica DeLancy, who was evicted from her apartment last Thursday.

DeLancy spoke, and said that even though the Cobb County Magistrate Court had vacated the eviction because the notice of the hearing was not sent to the address she had filed with the court, the apartment complex had refused to provide her with a key.

“I’m a resident of Riverside community in Austell Georgia, and on December 12, 2019 I was wrongly evicted from my apartment, Lake Crossing Apartments,” DeLancy said to the Board of Commissioners.

“The sheriff showed up at my door with an eviction team and put my two children outside, one who is a disabled son, my 17-year-old, and my daughter, 19 years of age, and a Christmas tree, on the front parking lot,” DeLancy said.

“I’ve been residing at Lake Crossing Apartments for four years.  My rent is $1107 a month. I even have to pay late fees of $200 a month added in there because of the fact that I take advantage of their installment plan,” she said. “I am a single parent with modest income, and my story is no different than police officers that I saw this summer, asking for pay increases so they can take care of their family.”

“My story is not different than the 50,000 students who have to rely on free and reduced lunch in order to eat in school because their family can’t afford to pay for their lunch,” she said. “My story is no different from the 300 people a week, who show up in Cobb County Magistrate Court, each week, and they have to see the judge about their eviction case.”

She said she believes she has been a model tenant at Lake Crossing Apartments.

“I helped pass out community newsletters, provided resources to the community.  I also this past summer set up the summer lunch school program,” she said.

DeLancy filed for bankruptcy, which put a stay  on the eviction proceedings.

When the stay was lifted, according to Magistrate Court records, on August 16, she didn’t receive notice that the hearing was rescheduled for November.  Since she was not at the hearing, a default judgement was issued, which led to the December eviction.

On Friday December 13 her lawyers filed a motion to vacate the eviction since the notice was not sent to the address she had filed with the court, and the court vacated the eviction.

“So what does that mean?” she asked. “Does that mean I go back and take possession of the apartment? Because I tried to do that today and was not given a key.”

A supporter of DeLancy, Jacqueline Dingle came to the podium and said, “I was just shocked to hear about my friend Monica and what happened to her and her family. I work in the community all over Cobb, with homeless people, helping them to get out of homelessness and to a shelter.”

South Cobb resident Felicia Williams took the lectern and said, “I’ve been knowing Monica DeLancy for seven or eight years.  We met at a PTA meeting and we’ve been friends every since.  She does a lot in the community. She holds community meetings.  We have events such as the National Night Out Against Crime which Commissioner Cupid came out with us also and played kick ball.”

“I was very upset to hear about what had happened to her, because she does so much in the community, and she’s always there for all of us. She was there for me last month when I needed rental assistance, and I go to work every day, 40 hours a week, and do overtime.”

Brianne Perkins, DeLancy’s daughter, said, “I want to talk about the disrespect of the movers and the sheriff.

“During the eviction process, the (the sheriff’s deputy) followed behind me when I was gathering my stuff. And if you don’t know, I’m in school, I go to college in North Carolina.  So I had my stuff already in the suitcase, because I just got home from school.”

“It came to my attention that my stuff was dumped out of my suitcase, and now my clothes are missing, and now I don’t have any clothes to go back to school with,” she said.

She said all her clothes remaining on her campus are summer clothes.

Geneva Vandershorst said, “I operate the S.T.I.N.G, Inc. non-profit organization in Smyrna, helping young people people get to college and beyond.”

“Monica DeLancy and the We Thrive in Riverside Renter Association has been one of our community partners for over ten years.”

“It is embarrassing, humiliating, and actually it’s a set-up for theft.  As your belongings are sitting on the street, thieves ride by and help themselves to your belongings,” she said.

National Night Out on Riverside Parkway will take place Aug. 4 with social distancing and masks

Be the first to comment on "South Cobb residents speak up for Monica DeLancy at Cobb BOC meeting."