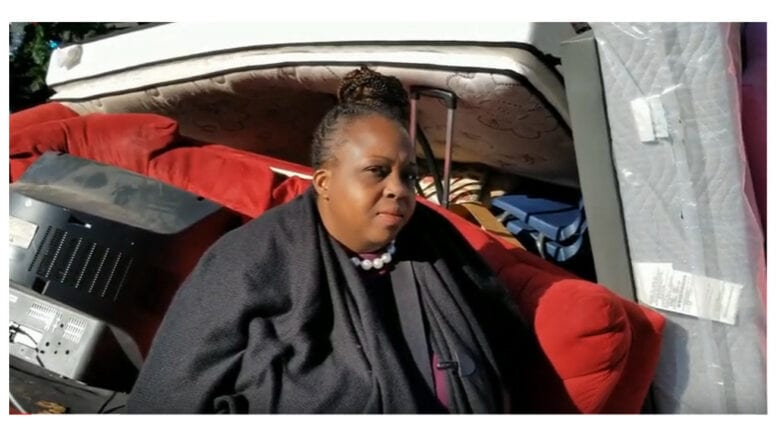 Update: Monica DeLancy told the Courier via text that DeLancy and the Cobb SCLC filed a motion to vacate the eviction, and a new hearing will be scheduled for December 20.

Well-known renters rights activist and candidate for the Cobb County Board of Commissioners Monica DeLancy was evicted from her apartment on Riverside Parkway in South Cobb Thursday morning.

Delancy, who is founder and director of the We Thrive in Riverside Renters Association, told the Courier, “I was never notified by the Cobb County Magistrate Court that Lake Crossing had refiled. The only thing I’ve seen was that they didn’t have to refile, because of the original filing.”

DeLancy said she wasn’t as concerned with having to move as she was by being denied her day in court, and that the hearing passed without a notification from Cobb Magistrate Court.

She said that if she’d been aware of the Magistrate Court hearing, she could have had her belongings packed and ready to move.

“Only thing I know from the apartment complex is that they know I am a force for renters, and pretty much when I asked them a question about different procedures, that’s when they started talking about ‘we’re not going to renew your lease’,”  she said.

She said her understanding was that the complex was within their right to carry out the eviction, but that after the federal court bankruptcy proceedings were finished, the eviction should come back to Cobb Magistrate Court.  She said that since she didn’t receive notification, she did not get her day in court.

Magistrate Court records indicate that the first scheduled hearing on Lake Crossing’s eviction proceeding, which began in the last week of July, was removed from the court calendar on August 16 after the court received DeLancy’s bankruptcy notice.

Then on October 21 the case was returned to the calendar, and a notice was supposed to have been sent to DeLancy the same day.

A new hearing was scheduled for November 8, and since DeLancy was not present, a default judgement was made in favor of the apartment complex.

The Courier spoke with a staff member at the Magistrate Court clerk’s office, who said that the notice had been sent to DeLancy.

When asked whether hearing notices were sent certified mail, the staffer answered no, and said “we’re not responsible for the postal service.”

Delancy said that her lawyer will attempt to get the default judgement thrown out, so that she can make her case at a hearing.

We Thrive in Riverside requests an eviction moratorium, and an end to exclusionary zoning