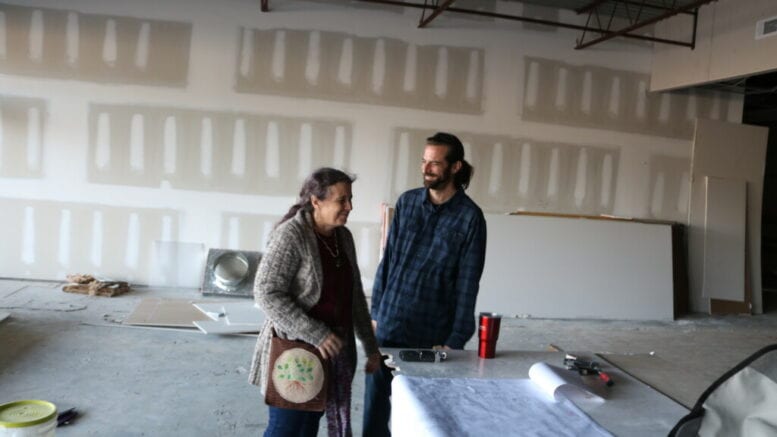 For Linda and Ben Brackner The Green Room is an obvious labor of love.

The upcoming restaurant and music venue will be located at 1391 Veterans Memorial Highway SW, Suite 114, in Mableton.

The term “Green Room” is a reference to the backstage lounge area in a theater or music venue where actors or musicians hang out before and after a performance.

The Brackners have been working on the space for about two years, and when the business is launched, the offerings will include pizza from a 4,000 pound Italian oven, live performances on a 24 x 16 foot stage, locally sourced beer and coffee, and a 30-foot bar.

“We’re not doing anything conventional,” said Linda. “So it’s not going to be you can come in and find, like, Budweiser or Busch. It’s going to be all locally crafted, smaller type of breweries that we’re going to be helping.”

Ben said, “We don’t offer Budweiser, (but) at least we’ll offer an alternative in price and taste.”

“We have a 24 by 16 foot stage. So we’ll have live music, live performances, we’re going to be showing old school films and shows,” she said. “We’re going to have family night.”

She said they want to have a “Rocky Horror Picture Show” night.

“We’re trying to keep it as local as possible. make changes in our community, hopefully to better it through what we’re doing,” said Linda.

“We bought most of our equipment so far. We have a storage unit we’ve been paying on two years now (to store) all the music stuff. We’re pretty in with the art scene in and around the Atlanta area,” she said. “And so through our affiliations, we’ve been able to acquire a lot of really big old- school sound equipment, which we’re really excited about.”

“We’re going to be getting our soundboard, which is going to be digital,” she said. “So we’ll be able to record the shows that we’re going to be hosting. We’re not an event center, so we can’t rent out the place. So we’re open for all ideas to host any anything here. Oh, it just has to come from us.”

Asked what type of music the venue would host, Ben said, “We want to go all across the board for the most part, I mean, it would be nice to represent the demographics of the area of the music, and the art.”

Ben and Linda listed several types of music they hope to host, including reggae, blues, rock and roll, Americana, folk, salsa and bluegrass.

Asked about the type of food the Green Room will be serving, Ben said, “We’re going to start out real simple with just pizza and subs to begin with. And then we’ll introduce, you know, more items. We definitely want to start a brunch on Saturday and Sundays.”

When asked the projected opening date for the Green Room, Linda wrote to the Courier in a text message, “We have said ‘3 months’ for the past 2 years…so to keep with that tradition let’s say March 21, 2020. It is also the Spring Equinox and our Wedding Anniversary”

To learn more about the Green Room, and to see progress photos of the renovation of their space, visit their Facebook, The Green Room of Mableton.