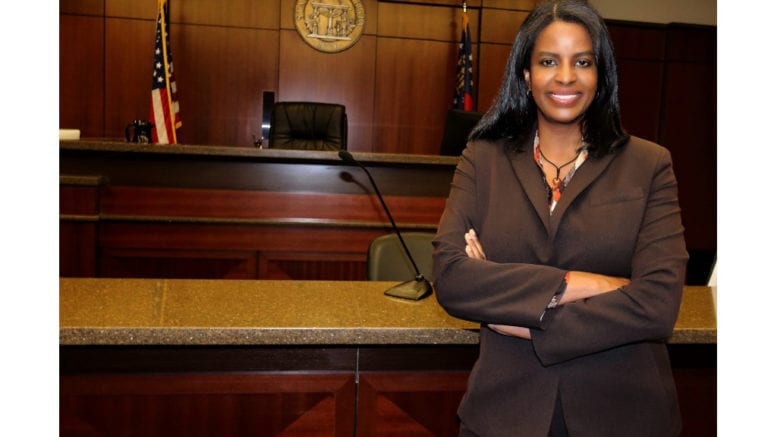 The following press release was provided to the Courier by the campaign of Daniele Johnson, a candidate for Cobb County Superior Court Judge.

The race is nonpartisan, so the winner will replace Judge Lark Ingram when she retires from the bench at the end of the year.

Daniele Johnson is running for Cobb County Superior Court Judge. Specifically, she is seeking to succeed the Honorable Lark Ingram who is retiring at the end of the year after 25 years of service.

Daniele Johnson’s career began before she even graduated from law school. In her 3rd year of law school, she became court-certified to represent victims of domestic violence in their pursuit of temporary protective orders against their perpetrators. On full academic scholarship, Ms. Johnson graduated from Widener University School of Law in 1997. Immediately upon graduating, she was hired by the Dauphin County District Attorney’s Office in Harrisburg, Pennsylvania. As an Assistant District Attorney, she handled bond hearings, preliminary hearings, and revocation hearings. Assigned to the Special Victims unit, she also helped prosecute crimes committed against children.

However, her true passion and motivation for earning a law degree was the practice of Family Law. In 1999, she moved to Cobb County to follow her husband, a graduate of Pope High School. Since then, she has been in the trenches alongside Cobb County families for the last 21 years, handling such matters as divorce, custody, child support, legitimation, adoptions, and domestic violence divorces. In 2006, she became trained and court-certified to serve as guardian ad litem, court-appointed to represent the best interest of children. She is the only candidate in her race that has both a prosecutor’s background and an extensive family law career.

With the exception of the first two years immediately following graduation from law school, Ms. Johnson’s entire career has been spent in Cobb County. She and her husband have been part of the Cobb Community since 1999 where they are raising their three children within the Cobb County school system.

To Daniele Johnson, the concepts of judicial transparency; credibility; impartiality; and intently listening to those who seek relief from the court are not mere words thrown out to the public when one is running for public office. She sincerely believes in these notions as reflected in the published articles she has written well before she became a candidate for Cobb County Superior Court Judge. One may read those articles in their entirety at her website at www.djfamilylaw.com. Her level of professionalism, expertise, and integrity are also reflected in the many client reviews one may find by a simple Google Search of her name.

Superior Court has exclusive jurisdiction over family law cases, including divorce, custody, and adoptions. This is precisely the type of law she has been practicing for the last 21 years, which is why she has never sought to serve in Magistrate or State Court. To her, serving on the Cobb County Superior Court bench is a natural extension of what she has been doing for her entire career, helping families transition from a moment of crisis to a point of fair resolution.