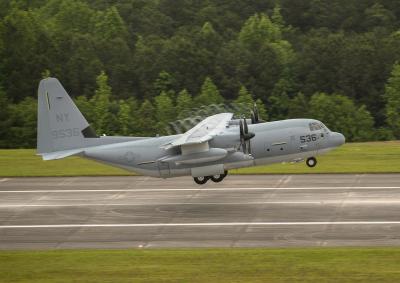 The contract is for $15 billion.

[Clarification: a representative for Lockheed Martin contacted us with the clarification that the $15 billion is not a contract that pays Lockheed Martin $15 billion directly, but is what is called an IDIQ … an Indefinite Delivery/Indefinite Quantity (IDIQ) contract, which is a contracting vehicle that allows the U.S. Air Force to fund aircraft procurement and support.

The IDIQ has an ordering period of five (5) years, and execution period of 10 years and has a defined financial ceiling of $15 billion.]

The announcement for the contract on the U.S. Department of Defense website describes the contract as follows:

Lockheed Martin Corp., Marietta, Georgia, has been awarded a $15,000,000,000 indefinite-delivery/indefinite-quantity contract for C-130J development, integration, retrofit and production activities for all C-130J variants. This contract provides flexibility to accommodate the broad enterprise of activities associated with the C-130J program. Work will be performed in Marietta, Georgia, and is expected to be completed July 16, 2030. This contract involves Foreign Military Sales and is the result of a sole-source acquisition. Fiscal 2018 and 2019 aircraft procurement funds in the amount of $3,300,000 are being obligated at the time of award. Air Force Life Cycle Management Center, Wright‐Patterson Air Force Base, Ohio, is the primary contracting activity (FA8625‐20‐D‐3000).

In response to a request by the Courier, Stephanie Stinn and Rob Fuller, who manage communications for the Marietta facility, described the current operations at Lockheed Martin’s Marietta plant:

The C-130 remains the largest program at the Marietta site. We are currently building the C-130J Super Hercules and I’ve attached our updated Fast Facts for insights on that program. We’ve produced every production model C-130 at the Marietta site, which means Hercs have been rolling out of Marietta for almost 66 years. It’s staple here in Cobb County! You can learn more about the C-130J in our brochure located here.

We also provide support (i.e., sustainment) for the C-5 Galaxy, which wrapped up a major modification providing 52 C-5s with new engines and avionics, in 2018. We celebrated the C-5’s 50th anniversary in 2018 and expect to see that aircraft in service – thanks to its upgrades and unique hauling capabilities – until 2045. See press release for more information. We also support the P-3 Orion through Marietta-based teams. Additionally, we manufacture F-35 center wings here in Marietta,