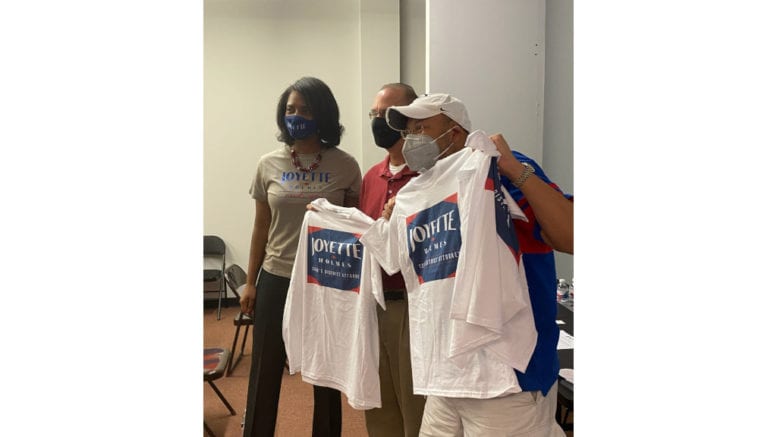 The COVID-19 pandemic may have thrown a couple of roadblocks in Cobb County District Attorney Joyette Holmes’ way in her roughly 15 months  as top prosecutor, but it apparently hasn’t altered what appears  a tough-but-nuanced approach to criminal justice.

At the grand opening of her Cobb County campaign headquarters Sunday, Holmes told a sparse but attentive crowd-and a reporter- that she draws a distinction between “those we’re scared of”- drug gangs, human trafficking organizations and others terrorizing the community, and “those we’re mad at”-those whose offenses relate to substance abuse, mental health or other issues that can be steered toward better options.

To that end, Holmes touted the enhanced use of such tools as diversion programs, accountability courts and community outreach on her watch as among the initiatives she hopes to carry forward beyond November.

The Valdosta native was appointed DA in June of 2019 replacing now-GBI Director Vic Reynolds. She became the first black woman to hold the position and is running as a Republican for a full four-year term in the Nov. 3 election.

Holmes touted her background as a prosecutor in the solicitor general and district attorney’s offices, as chief magistrate judge and as a private defense attorney as qualifying her to “make sure the work that we do is done with integrity and experience.  That’s what this county expects from our public safety communities.”

She noted that with professional athletics and tourism Cobb is positioned as a magnet for traffickers and wrongdoers who should be vigorously prosecuted but that on the other side of the coin “if you have a young teenager who’s not a member of a gang but seems to be veering in that directions whether it’s because of the group they’re with in school or they’ve not had the opportunity to see people flourish, that we work through those diversion programs that have been set in juvenile court and in the community..to make sure we see them to the other side.

One such resultant outreach program is a “Project Restore 360” event held Feb. 29th. It facilitated record restrictions-sometimes known as expungements- for those who were arrested but acquitted or not convicted of a crime and who completed first offender, pre-trial diversion or conditional discharge programs, with judges sealing records that could have been viewed by prospective employers. The event doubled as a job and economic opportunity fair.

She told the Courier in a similar vein that she supports “ban the box” restrictions that generally limit a prospective employer from asking applying job candidates about arrests or criminal history-at least initially. But, she said, such restrictions need to be nuanced and dependent upon the type of employment involved.

Unfortunately, she said, other Project Restore events have been scuttled by the COVID-19 pandemic but she’s hopeful they can be rescheduled.

Holmes said the pandemic has also made some types of crimes harder to spot leading to another form of community outreach.

She said with virtual learning ongoing, many schoolteachers have not been able to see their students to report signs of possible physical abuse. Ditto with seniors who are sheltering in place and no longer attending programs at centers.  Holmes says her office has thus mounted several initiatives, including back to school drives and distributing informational and entertainment packets to isolating seniors.

“We’re not standing by waiting for cases to come in where we can send them to a place where they need to go for that help,” she said. “We do not operate in a silo.”

Attendees who munched burgers in the campaign-banner-festooned [Editors note: an earlier version of this article contained a typo which transposed the word “festooned” incorrectly with a word with “infested,” a word with negative connotations. “Festooned” was the intent of the reporter. Our apologies and we regret the error] office near downtown said they stood behind her 100 percent on both a personal and professional level.

Naomi Campbell, A Fulton County Assistant DA and Cobb resident said that when she moved to Georgia she was introduced to Holmes, who helped her with the bar-qualifying process and otherwise mentored her.

Said Campbell, “Who she is in front of the camera is who she is behind the camera.  Her integrity is amazing.”

Will Robbins, who described himself as a friend of the family and a Cobb resident, struck a similar tone, calling her “a good, fair honest person.”

Holmes indicated that she’s hopeful that reputation plus her string of justice-system credential will help her prevail. She’s opposed by Democrat Flynn Broady, who serves as Assistant Solicitor General and DUI Court Prosecutor for the DUI Accountability Court.

Holmes downplayed the horse race, telling the Courier that “none of our work is partisan in nature. None of the decisions we make are based on party so that’s not something you’re not going to hear me talk about a whole lot because the work is what’s important.”