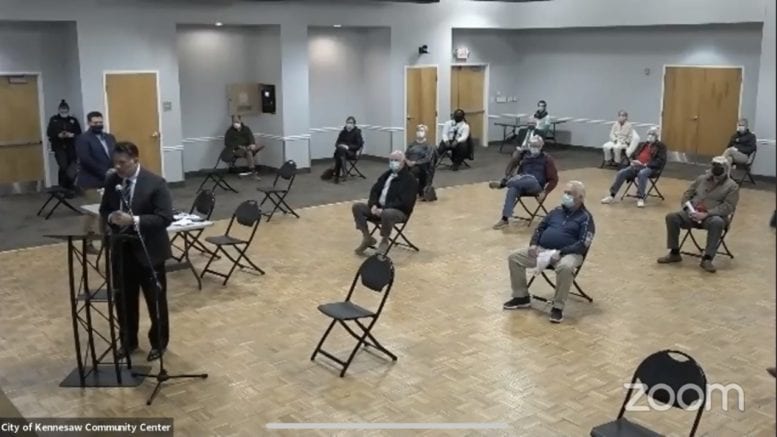 Due to social distancing protocols, overflow audience members attended the public hearing for the Lockhart Drive rezoning via Zoom from the Ben Robertson Community Center. (Asst. City Manager Marty Hughes at the microphone). -- Screenshot of videoconference of meeting.

The rezoning and variance requests for the proposed student housing project at 1320 Lockhart Dr. were denied by the Kennesaw City Council Monday.

This was the first test of Kennesaw’s new purpose-built student-housing ordinance, which was passed earlier this year. Applicant York Acquisitions, LLC requested the seven-acre property be rezoned from office use and light industrial to PBSH. It also applied for a road variance, which would have allowed access points along Lockhart Drive, a local road. The ordinance requires access points to be along major or arterial roadways.

The applicant had previously requested a density variance to increase the maximum number of beds from 352 to 424, but withdrew the request after complaints from the community. The revised design replaced one of the buildings with a community pool and clubhouse.

In spite of the changes regarding density, the project still drew heavy opposition from residents of surrounding neighborhoods. City officials stated they had received many emails, letters and an online petition with 272 signatures.

Attorney Kevin Moore presented on behalf of Aspen Heights Partners, the company that designed the plans for Lockhart Drive.

According to Moore, Kennesaw State University has a 6,000 bed shortage that is not being provided on or off campus. He also said there will be a landscape buffer area to screen the student housing development from Ben King Road and the Enclave at Pinetree Country Club neighborhood.

He told the council that the developers have incorporated all suggestions from the Cobb DOT based on the traffic study and the “studied intersections will operate at acceptable levels of service.”

Zoning Administrator Darryl Simmons recommended approval of the variance, saying that the project fit the overall intent of the ordinance and pointing out the proximity of both the university and other industrial properties.

“The issue tonight is not the 99 percent of the ordinance that is in compliance based on the revised site plan, but the variance of the traffic egress and ingress off of Lockhart Drive,” he said. “That same Lockhart Drive that is shared by St. Charles apartments, Ernst Concrete, churches, office, warehouse, and all the other industrial uses along that drive.”

Phil Anzalone, president of Pinetree Civic Association, which represents about 600 homes, presented in opposition to the variance.

“If you issue this variance, you basically break the ordinance,” he said. “If you do that, you’re basically giving other developers the right to ask for the same privilege.” He also raised several concerns about how the traffic study was conducted, including the time it was completed and intersections not included.

Jim Musgrave, HOA president of the Enclave at Pinetree Country Club, also spoke in opposition, showing photos of his nearby residential neighborhood and questioning the amount of green space included in the project.

“I do expect the mayor and city council to put the interest of the community above the financial gains of developers like Aspen Heights and any follow-on developers who would ride Aspen’s coattails onto local roadways,” Musgrave said.

“There’s been discussion on this for over a year. So I’m sure the developer’s aware of the ordinance. Darryl wrote the ordinance and Darryl was aware of this for the past year, so I really don’t see where Darryl is coming from on this. But I don’t want to set precedent and I don’t see hardship,” Ferris said.

“This space, to me, meets the standard more than most of those other locations I brought up, which would require students to travel much farther,” Viars said.

Council member David Blinkhorn said he disagreed with Viars that there was a lack of space for student housing.

“Other developers are finding ways to work with the city and not ask for a variance,” he said, adding that Cobb County also has developers looking at building along the Chastain Corridor.

Meetings can be viewed via the City of Kennesaw Government Facebook page.

Baldwin Paving and neighbors meet about conflict over concrete crushing