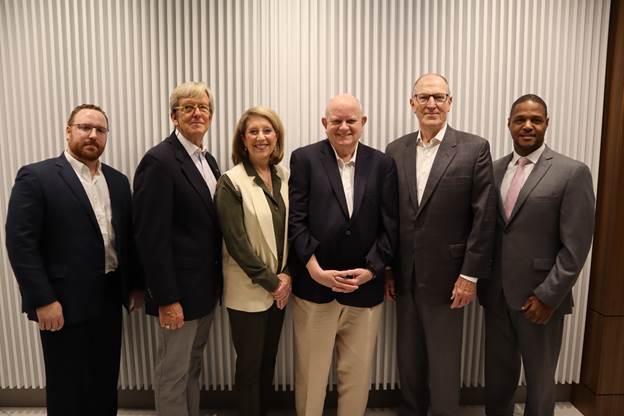 The Cumberland CID issued the following press release announcing the election of Alex Valente and Chris McCoy to its Board of Directors:

(CUMBERLAND)- Commercial property owners of the Cumberland Community Improvement District (CID) elected Alex Valente and Chris McCoy to the Cumberland CID Board of Directors at a Caucus of Electors Thursday morning. Valente and McCoy filled two open seats created by the retirement of Mason Zimmerman and Steven Barnhouse from the Board. Board Chairman John Shern also was re-elected.

“It is an honor to be elected and to serve on the Cumberland CID’s Board of Directors,” said Valente. “With the Galleria Atlanta located in the heart of the Cumberland, we are heavily invested in the success of the CID. My focus will be to continue to strengthen the efforts and goals of the CID and further position Cumberland as a great place to live, work, and visit.”

“I am grateful for the opportunity entrusted by the commercial property owners of Cumberland to be a part of the Board,” said McCoy. “Representing Cumberland Mall, I have seen firsthand how projects of the Cumberland CID have enhanced our community. The CID, along with its partners, have been a leader in making the region more attractive, more accessible, and more connected.”

Zimmerman was first elected to the Board in 2003 as a representative of Pope and Land Enterprises, Inc. Barnhouse was elected to the Board in 2018 and represented Olshan Properties. Both Zimmerman and Barnhouse made important contributions and helped to shape the direction of the Cumberland CID during years of significant growth. John Shern represents The Home Depot and has served as a Board Member since the inception of the Cumberland CID in 1988.

About the Cumberland CID

The Cumberland Community Improvement District (CID), Georgia’s first CID, is a public-private assessment district in northwest Atlanta. It is an organization through which local commercial property owners can advance necessary public infrastructure projects that enhance property values as well as the greater community. Originally formed in 1988 by business leaders interested in improving highway access for the emerging Cumberland submarket, the CID went a step further and created a master road plan for the area. The Cumberland CID now represents 190 commercial property owners (residential excluded) and facilitates additional road and transit infrastructure improvements, streetscapes and beautification projects, bicycle and walking trails, alternate commute programs and services as well as community planning.

Arrests made in Cumberland Mall shooting