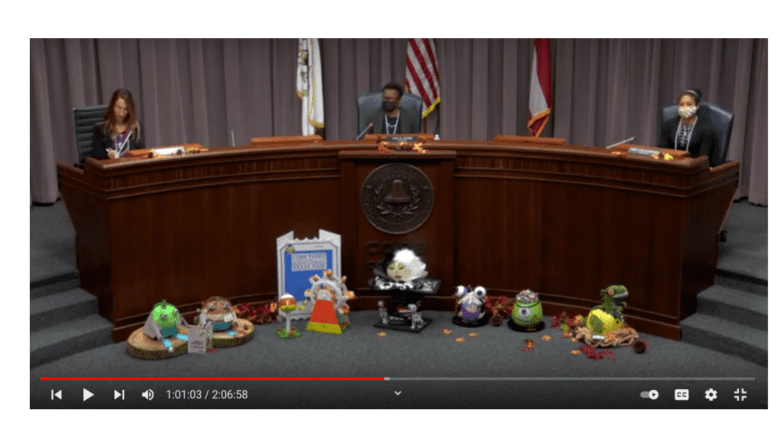 In a unanimous 5-0 vote the Cobb County Board of Commissioners approved the use of up to $350,000 from the county fund balance for emergency expenditures relate to the World Series games in Truist Park.

The letter in the agenda packet, from Cobb Finance Director William Volckman to County Manager Dr. Jackie McMorris stated the background of the request.

The Major League Baseball (MLB) World Series will be held at Truist Park on Friday, October 29, 2021 and Saturday, October 30, 2021, with the potential of a third game on Sunday, October 31, 2021. The World Series and related events are anticipated to be designated as a Department of Homeland Security (DHS) Special Event Assessment Rating (SEAR) Level III, which indicates a heightened awareness status.

The primary purpose is to provide a safe and secure environment for the World Series; as such within the Cumberland and the surrounding areas, we anticipate over 200,000 visitors within the three days.

County departments will incur some foreseeable unbudgeted expenses related to the World Series; examples include, but are not limited to, supplies, equipment, signage, and overtime. The total estimated investment for hosting the World Series is anticipated not to exceed $350,000.00.

Volckman presented the request to the commissioner, and said, “We do know that these World Series events are anticipated to be designated by the Department of Homeland Security as a special event assessment rating Level III, which indicates a heightened awareness status.”

“So what we’re asking the board to do is establish a contingency,” he said. “Basically, we’re going to appropriate fund imbalance in the amount not to exceed $350,000 for a contingency related to for costs associated with these games.

District 3 Commissioner JoAnn Birrell asked if the money would be used just for security personnel such as police and fire.

Volckman said funds would be used for police, fire, Sheriff’s Office and information services related to the event.

Chairwoman Lisa Cupid asked if the Cobb DOT would be allocated any funds. Volckman said yes, but there would be a specific cap on their allocations from the fund.

He said that it is anticipated that much of the funds would go to additional overtime for personnel.

It was decided the Finance Department would provide weekly reports to the commissioners.