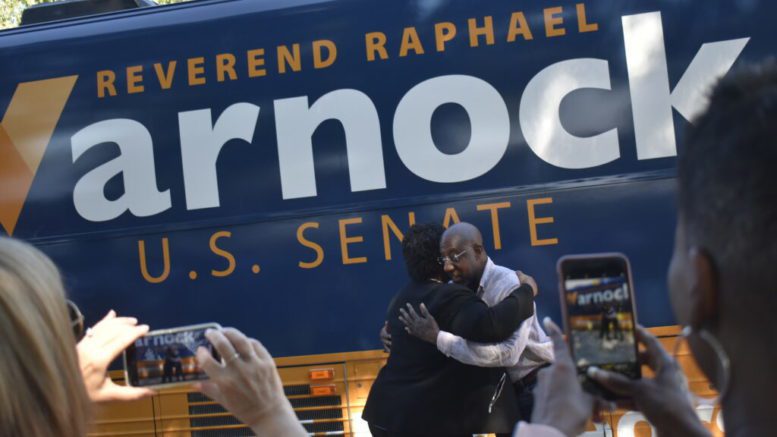 A bus bearing the face of U.S. Sen. Raphael Warnock pulled in to the Cobb County Civic Center parking lot Wednesday, but the freshman senator was not the only Democratic leader to deliver a speech in Marietta.

Gubernatorial candidate Stacey Abrams, whose name will join Warnock’s near the top of Georgians’ ballots this November, tagged along to stump for the senator.

Abrams exhorted the crowd of Democratic voters to volunteer to knock on doors for Warnock, crediting his support for expanding voting rights, fighting mass incarceration and expanding Medicaid.

“It’s not that the resources necessary don’t exist. They do exist. It is because we have a governor who refuses to expand Medicaid,” Abrams said. “But we’ve got a senator in Raphael Warnock who has been fighting to expand Medicaid and serve 600,000 Georgians right here in our state.”

“If we re-elect Raphael Warnock, then as governor, I will have a partner, not opposition in serving the people of the state of Georgia,” she added. “When we re-elect Raphael Warnock, we will have a voice of the people, someone who speaks about our needs and knows how to get good done. He has an opponent who doesn’t seem to believe in anyone or anything. But I know that if we want to save our hospitals and save our people, we need somebody who knows how to save souls, Raphael Warnock, as the senator from the great state of Georgia.”

Abrams presence at the rally is, in a sense, not surprising. The two belong to the same party and have been friends for more than a decade. But the Marietta appearance marks one of the first in the campaign since both Democratic favorites qualified in March with the election just over two months away.

For much of Georgia’s history, candidates typically operated their own independent campaigns, said University of Georgia political science professor Charles Bullock, but the lack of joint rallies had raised questions.

“Doing this today at least tamps down those inquiries,” Bullock said. “The implication behind the inquiries being ‘Don’t you want to be seen campaigning with your candidate for governor?’ So that puts that to rest.”

The pair’s Republican opponents, Gov. Brian Kemp and Senate hopeful Herschel Walker, made one of their first joint appearances over the weekend at the annual 8th District GOP Fish Fry in Perry, along with Republican lieutenant governor candidate Burt Jones. From left. Herschel Walker, Gov. Brian Kemp, and Sen. Burt Jones pose for a photo at the 8th District GOP Fish Fry in Perry. Via Burt Jones’ Facebook.

Warnock and Kemp, the two incumbent candidates, have trended higher than their challengers over the course of the election, despite coming from different parties.

The Real Clear Politics average of recent polls gives Warnock a 2.7% lead over Walker, but sees Kemp 4.6% above Abrams. Analysts have pointed to Kemp and Warnock’s incumbency advantage, Walker’s lack of experience and history of false statements and four years of conservative attacks on Abrams.

But a pair of polls conducted in late August give Walker a slight advantage over Warnock and Kemp a larger lead over Abrams.

An Emerson College poll split the Senate vote 46% to 44% in Walker’s favor and shows Abrams slightly closer to Kemp than Trafalgar with 44% of the vote to Kemp’s 48%.

Both incumbents could be weighing the costs and benefits of appearing with the candidate trailing them, Bullock said.

“Part of (Warnock’s) effort is to get some Republicans who are going to vote for Kemp to then cross over and vote for him. An appearance with Abrams maybe would make it a bit harder for him to get that,” he said. “And the fear on the Republican side is that some Republican voters will also do this, have a split decision, vote for Kemp but not vote for Walker. If Walker is indeed a drag, then Kemp doesn’t want to attach himself to that.”

If Warnock feels dragged down by Abrams, he didn’t show it Wednesday. His speech touched on familiar themes – a list of his accomplishments since being elected, including a cap on insulin prices and a bill to expand domestic computer chip production as well as his history as an activist pastor before seeking office – but he also shouted out Abrams.

And if the theme of togetherness becomes a trend, it will happen at a time when undecided voters will begin seriously paying attention to the races, Bullock said.

“Each successive week, there will be more voters who are going to start to be paying attention to what’s happening in these campaigns,” he said. “For a lot of voters, it’s been out there, but they’ve successfully managed to block it from their consciousness, but as we move closer and closer to the election, there will be more and more voters who start to tune in.” Stacey Abrams lends her support to Sen. Raphael Warnock at a Marietta rally Wednesday. Ross Williams/Georgia Recorder

Georgia runoff elections are exciting, but costly for voters and democracy

Kemp at Jim Miller Park: vaccination delays due to lack of supply