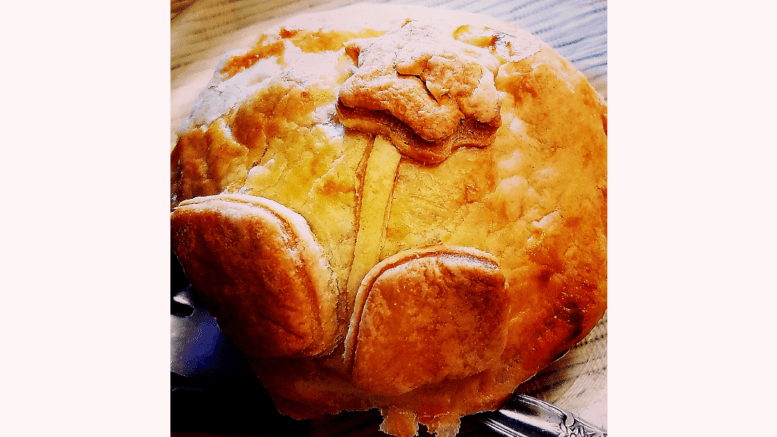 I have vivid food dreams, and while that may seem weird to some, if you have eaten a pot pie from Paul’s, then you may have them too. Paul Lubertazzi has been cooking, baking, and catering delicious meals in Marietta for over 35 years. Yes, you read that right. It all started when Paul moved down from Nutley, New Jersey, in 1982 and opened a catering business in 84′ named Traveling Fare at Marietta Square. He had recently graduated from the esteemed Culinary Institute of America in Hyde Park, NY. Paul expanded to a sit-down, full-service restaurant in 1986 and served salads, quiche, and of course, pot pies by the slice.

People were enamored with what Paul had created with his pot pie recipe and couldn’t get enough of the flaky, savory goodness. Customers began asking if they could purchase an entire pie, so much so that Lubertazzi decided in 2005 to only serve pot pies for pickup, which has become his legacy. The pie menu has expanded considerably over the years, but you can never go wrong with the Classic Chicken, which has only breast meat, green peas, carrots, and corn. If you want a bit of spice in your life, then opt for the Chicken Curry pie, made with juicy chicken, basmati rice, broccoli, carrots, and peas tossed in a rich curry sauce. They are now offering over a dozen types, including Jambalaya, Vegetarian, Pot Roast, and a Sloppy Joe flavor that takes me back to the elementary school cafeteria the moment I take the first bite.

Paul’s shop was on our food tour for many years, and guests consistently voted for his mini chicken pie as a favorite. When I asked him what his favorite pot pie flavor is, Paul quickly responded, “with a name like Lubertazzi, it’s gotta be the Italian Sausage because of my heritage.” I have indulged in this particular choice more than once: a hearty marinara sauce, traditional Italian sausage, fresh bell peppers, onion, zucchini, mozzarella and provolone cheese. Are you salivating yet? There are two sizes for sale, a six or ten-inch option, and if you misplace your dumbells for some reason, you can lift weights with the 10-inch size because they weigh about as much as a Vespa moped. My wife and I split the six-inch version and add a salad that makes a perfect meal for two. The pies come fresh or frozen and can be cooked from either by simply adjusting time and temperature.

The crust. Oh, the flaky, buttery, dream-inspiring crust. Paul pre-bakes the bottom shell so it doesn’t get soggy, and the top crust is made of many layers of pillowy puff pastry topped with his signature flower that lets everyone know it came from Paul’s pot pies. Their establishment has achieved such a big following over the years that they have been on the Travel Channel and featured his shop on a food show, Pot Pie Paradise. Lubertazzi told me he knows when the show re-airs because he always sees an uptick in business. In addition to the Marietta Square location, they’ve expanded to have a second pickup spot on Jiles Road in Kennesaw, where they acquired a massive kitchen to do large-scale production in the facility that was once a community-shared commercial kitchen space.

If you want to bring something different to your Thanksgiving table, you better hurry and call to order the Turkey pot pie. It’s the entire holiday meal wrapped in a pie crust: moist turkey breast, savory stuffing, green beans, cranberries, and corn. Some may scoff at the notion of cranberries mixed with the other ingredients, but trust me, it works and works deliciously. Paul said they fared well during the pandemic because they could provide curbside pickup, and many of his customers would buy 20-30 pies at a time because of not knowing what the future would bring.

I love it when a business hones in, focuses on one thing, and does it better than anyone else. Paul’s Pot Pies stays in their lane and knows how to please the community with comfort food at its finest. Stop by either location and stock your freezer like a squirrel stores nuts for the winter, and you won’t be disappointed.

Brian Benefield is an Atlanta native born in Dekalb County, who has lived in Cobb since 2003.

He has worked in Hospitality, Marketing, Real Estate, and most recently Food Tourism.

They have a dog, Miss Pickles.

Hobbies are mountain biking, running, gardening, and trying new recipes in the kitchen

Member of Les Marmitions cooking club since 2016, where we cook 5-course meals with local Atlanta chefs.