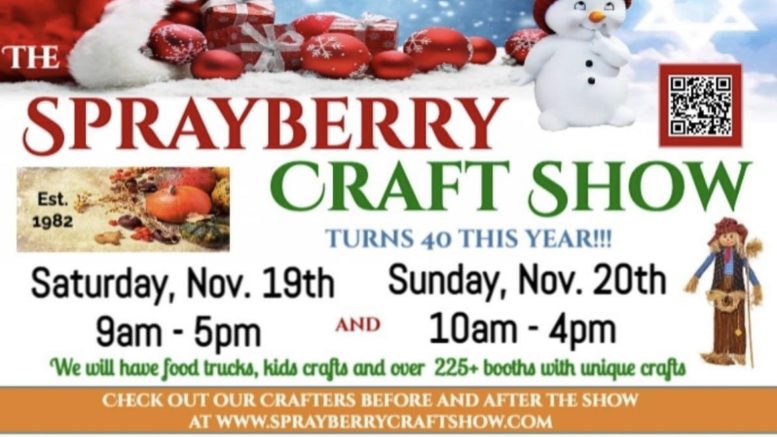 The Courier spoke with Sharona Sandberg, the show coordinator, and she began by describing the origin of the event.

“The Sprayberry Craft Show was started in 1982,” she said. “It was originally in the parking lot of the school.”

“It was started by the PTA, or the PTSA as it’s now called, with Sprayberry High School,” she said.

Sandberg said in the beginning there were just a few craft booths, and now there are around 230.

“We are mostly inside. We do have some outside craft booths available,” Sandberg said.

She said that all items have to be hand-crafted, so they don’t allow any resale items.

“Everybody has to make their own crafts,” she said. “Now when I say that, obviously I don’t require the artist to make the frames. They can buy frames, but they have to put their artwork in the frame.”

“We have crafters that come from all over the southeast,” she said. “I have crafters from Florida, North Carolina, Tennessee, Alabama, and they will drive down to come to our show.”

Sandberg said the show is always the weekend before Thanksgiving.

“The entire thing is from start to finish put together through volunteers,” she said. “Nobody gets paid to do anything, including myself. And this will be my eighth year that I’ve run it. We’ve had quite a few people who have been the coordinator over the years. And each year gets a little bit bigger and better.”

“We do have a little food court area that I’ve put together now, where we bring cafeteria tables out,” she said. “We set it all up in the parking lot and we have our food trucks out there.”

“We have our concession stand inside and that is operated by our Lady Jackets basketball team and their families,” said Sandberg. “So that is the only fundraising group from the school other than the PTSA that participates.”

“It goes to teacher mini-grants, scholarships for seniors … we help pay for AP exams for students who can’t afford it. We do all kinds of things. All of that money just goes right back into the school.”

Sandberg said that the website for the event, https://www.sprayberrycraftshow.com/, was built by a STEM (Science, Technology, Engineering and Math) group at the school called Girls Who Code. Girls who code are studying computer science and coding.

The website has pages for each category of art or craft, with the booth number of the vendor, and a link to their website, Facebook page, Etsy page, Instagram, or whatever the vendor prefers.

“They also operate a food service just for the crafters because we’ll have a lot of crafters who are elderly, or they’re by themselves, and they can’t really leave their booth,” she said. “So they can order food and pay for it. And it will be brought to them by our student volunteers.”

“We have menus from all of our food trucks, and I upload them and give them out,” she said. “And it is a huge undertaking.”

“This year, we’re celebrating 40 years, so we’re going to have a cake and celebration on Saturday at five o’clock after the show.”

“That’s going to be exciting just to give back because we have some crafters who have been in the show for 30 years,” said Sandberg.

Sandberg said there is a jury process to get in the show, and those applying for a booth have to provide photos.

“One of the last things I’ll talk about is I created something called Santa Lane,” Sandberg said. “And that’s a section in the craft show where we have a craft area for kids.”

She said the cost is $3 per child to enter.

In this area the child can make an ornament and write a letter to Santa.

“We have a little mailbox that we’ve created,” she said. “And they put their little letter in to Santa.”

She said Santa Claus would be present for pictures with the children. Parents can take a picture of their child with Santa on their own cell phones.

“And you know, the mall Santa photos, they’re probably better, but they’re so expensive nowadays. So this way for $3, you can get a picture of your child with Santa and make an ornament, and write him a letter.”

Sandberg said it isn’t a drop off point. Parents have to stay there with their children.

“One of the things we do not allow, though, are strollers or wagons.”

She said the areas are so tight because of the booths that “it’s a fire marshall thing,” and strollers block the aisles. She also said in the past they’ve had people with “light fingers,” and strollers make it easy to conceal things.

“So I kind of make that very upfront.” She said that the strollers can be left outside.

In addition to the website, the event also has a Facebook page where more information is available.