Chattahoochee River at the Riverview Landing side -- Photo by Haisten Willis

While residents living near the Chattahoochee River were excited to hear Smyrna’s proposed Riverview Landing development has new life, some locals were also disappointed the retail portion was mostly removed.

The project has been in the works in some form or another since 2008. Previously led by Jamestown Properties, the company behind Ponce City Market, it originally included 155 single-family residences, 332 townhomes, 165 condominium, 200 residential senior housing units and 850 apartments on the banks of the Chattahoochee River.

Overall, the first version the plan consisted of 1,702 residential units and 190,000 square feet of commercial space for a total of 2,345,550 square feet. However, Jamestown sold the property last year and it has been scaled back.

The updated version  includes 65 single-family units, 233 townhome units and 310 multifamily units, with the only retail coming in the form of a 3,000-square-foot coffee shop. The Ardent Cos., which bought the property from Jamestown last fall for $12 million, is now the developer.

“I’m disappointed that the retail plan has been considerably diminished,” Jennifer Jerral wrote on the Mableton Improvement Coalition Facebook page. “Restaurants overlooking the river would have been a fantastic improvement to the area.”

“I was so hoping for some restaurants,” she wrote. “I believe the demand is here. I run into neighbors in Smyrna and Vinings because we have to drive there.”

However, if the coffee shop mentioned in the updated plans comes to fruition, it would still provide a gathering place for locals to hang out by the river and maybe have breakfast or lunch. 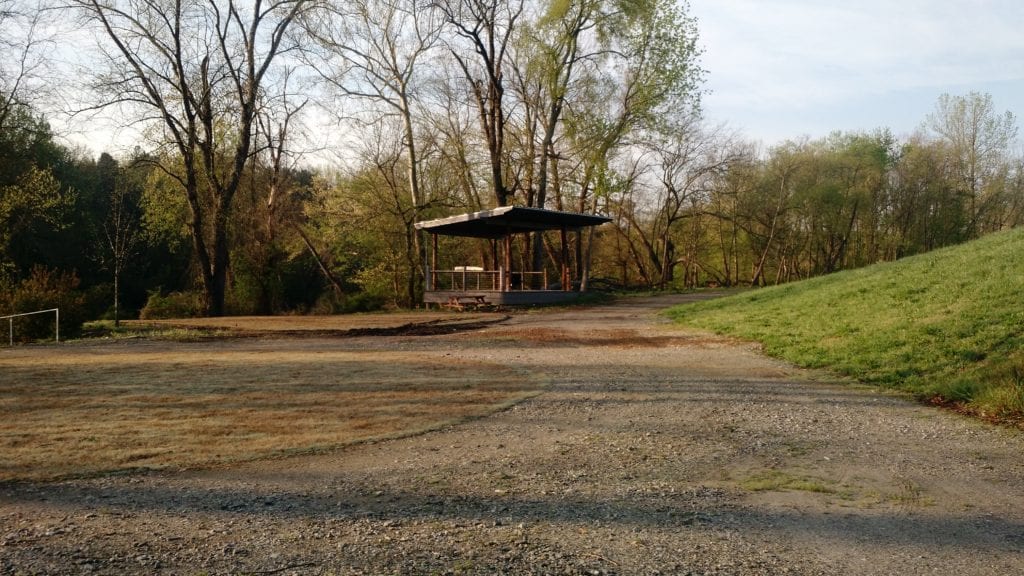 Riverview Landing site prior to development — photo by Haisten Willis

Neville Allison, managing director of Ardent Cos., said the company hopes to break ground in early 2018, with construction taking place in stages over the following three or four years. He’s planning for the shop to stay in the plans, though nothing is guaranteed.

“The whole development is just proposed at this point, nothing is set in stone, but we are planning on the coffee shop being a part of it,” he said.

“We’ve created a traditional residential development that’s ready for today’s and tomorrow’s market,” he said. “We’re not interested in holding the land for 20 years hoping that it becomes a retail corridor. We’re here to put the site on the river in production. We’re very excited about the project and we think it’ll be iconic for Atlanta.”

Based on Powers Ferry Road, The Ardent Cos. is a local real estate firm which has invested in more than 100 individual transactions totaling more than $850 million, according to its website.

Smyrna Ward 3 council representative Teri Anulewicz admits it was disappointing to lose the original vision for Riverview Landing, which she described as “a Ponce City Market on the Chattahoochee,” but is still excited for the new version.

“I still think you can apply the ‘transformative’ label to this project,” she said. “The way it’s been explained to me is with that the high-end retail they were talking about — the rooftops just aren’t there to support it.”

She described the old “retail follows rooftops” mantra as a bit of a chicken or the egg situation. Residents might not choose to live in an area without high-end retail, and retailers don’t want to move into an area without residents.

“It’s a bit of a tricky equation emotionally,” said Anulewicz.

She points to the proposed-12 acre public park as a transformative attraction regardless of how much retail ever makes it to Riverview Landing, and added that it’s great that Smyrna is finally able to take advantage of its proximity to the Chattahoochee.

“What was most important to me was preserving access to the river for all residents,” Anulewicz said. “Ardent remains committed to that. The 12 acres that will become city property and frontage along the river will be an important component of the project. It will be fun deciding how we want to develop that.”

In the new iteration of Riverview Landing, townhomes will start in the $200,000s, with larger units and those on the riverfront going for closer to $400,000. Most of the land around the site is either undeveloped or industrial, and there are buffer zones built into the plans to separate the residential property from the industrial. The site spans 82 acres in total.