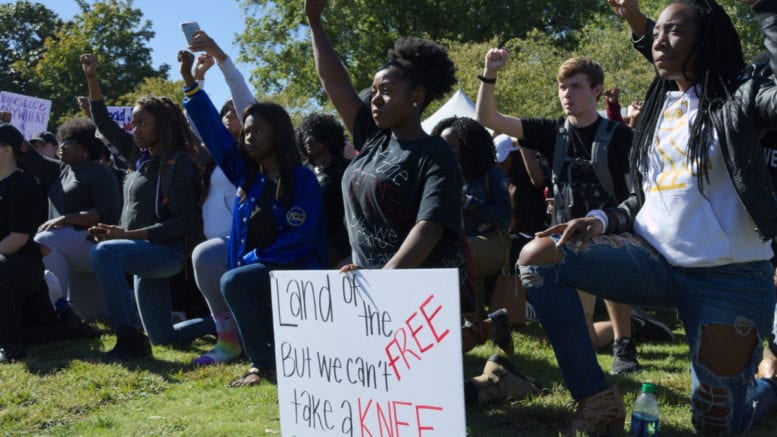 For the second time this week, students at Kennesaw State University protested on campus Thursday, Oct. 19, to support the five cheerleaders who continue to kneel during the national anthem at football games, though they’ve been removed from the field.

More than 100 students arrived on The Campus Green just before noon, where the KSU community was celebrating the official installation of President Sam Olens. Though Olens has served in his position for almost a year, he was welcomed as the university’s fourth president in a traditional investiture ceremony.

As the KSU Marching Owls played, protesters approached from multiple sides and converged in the center of the The Green, walking past rows of guests and spectators to gather on the grass and kneel with a raised fist.

Once the band stopped playing, Aleaka Cooper, a senior at KSU, spoke to the crowd through a megaphone, emphasizing the peaceful nature of their protest.

“Our cheerleaders do not deserve to be attacked for using their First Amendment rights, and we have all come out today to show we stand with them,” Cooper told the crowd. “We are here to make a change at Kennesaw State University.”

Despite the live band that played on stage and the noise of the ceremony, students took turns giving passionate speeches about their cause into the megaphone.

Exchange between protesters and a counterprotester

A few minutes into the demonstration, another student, Neil Wolin, approached the front of the crowd with his hand over his heart and offered his perspective on the issue. After a heated debate with a few of the protesters, Wolin explained in an interview that he believes putting an emphasis on race does not promote unity.

“It’s disrespectful to the progression that we could be making, and it’s encouraging divisiveness,” Wolin said in an interview. “That’s it.”

Overall, Wolin said he disagrees that there is a problem with racism in America.

“MLK did the important stuff. It’s all been done,” Wolin said. “Violent protests break out across America because of this movement. Not because of right here on campus right now, but in general.”

He said that the Black Lives Matter movement was creating more problems than solutions.

“Don’t cause racial tension for no reason,” Wolin said. “Don’t punish everyone in America because you’re upset about a few murders from the police.”

When Wolin approached the crowd, it was protester and fellow student Kyrefe Harper who pulled him to the side to speak one-on-one. 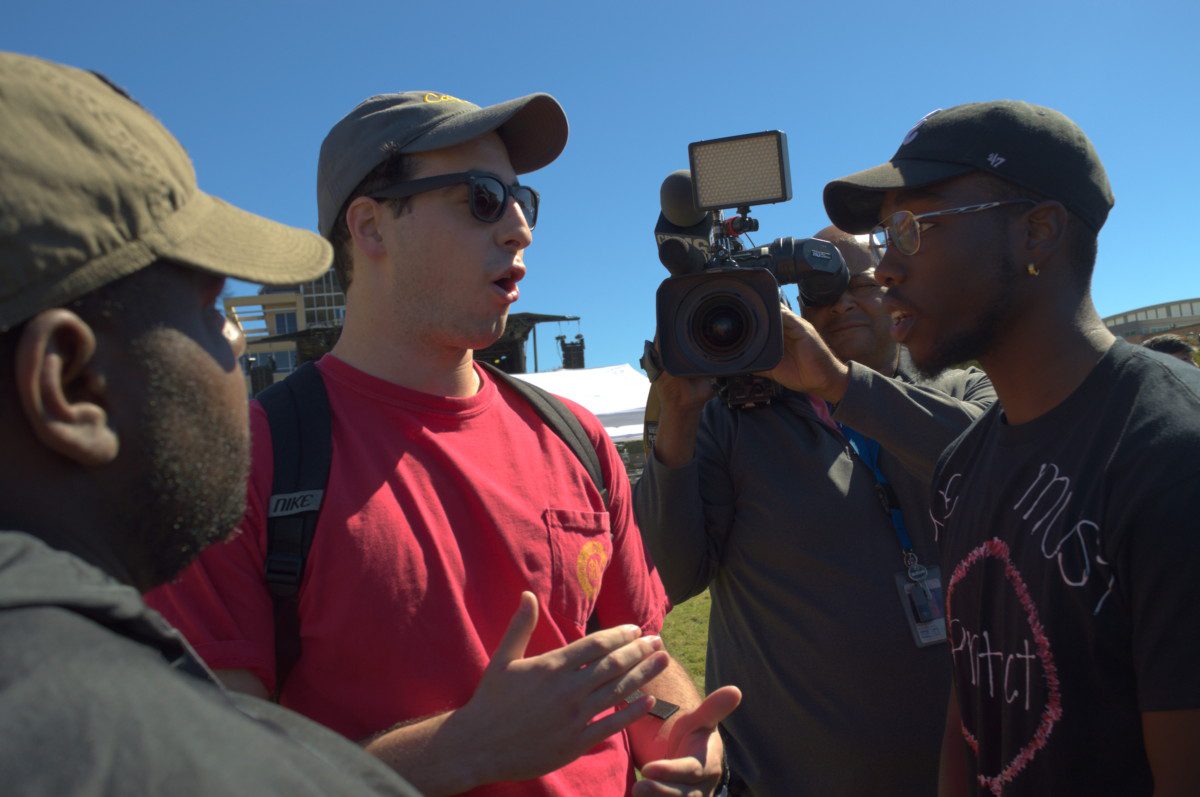 “I love to sit down with opposition, because I want to engage,” Harper said. “I wanted to make sure that no one turned what we were trying to do peacefully into something more violent and something it didn’t have to be, so that’s why I was sure to pull him to the side.”

In response to Wolin’s comments, Harper disagrees that the movement is only about one race.

“Everyone here was not of one demographic group,” Harper said. “If he says he loves America the way that he professed … then it should tear you apart to see Americans die, no matter what their race is.”

Regardless of the opinions expressed, Harper said he was ultimately thankful for the opportunity to exchange those ideas with Wolin.

“It was definitely engaging and I’m glad we had it,” Harper said. “It was heartwarming because it’s like, here we go, now we’re starting to break down barriers. We’re taking this time to understand one another.”

While Olens declined to comment during the celebration, Provost and Vice President for Academic Affairs Ken Harmon said that peaceful demonstrations like this exemplify the point of an institution.

“A university should be a place where we exchange ideas in a good civil fashion,” Harmon said. “It looked like that’s what happened today.” 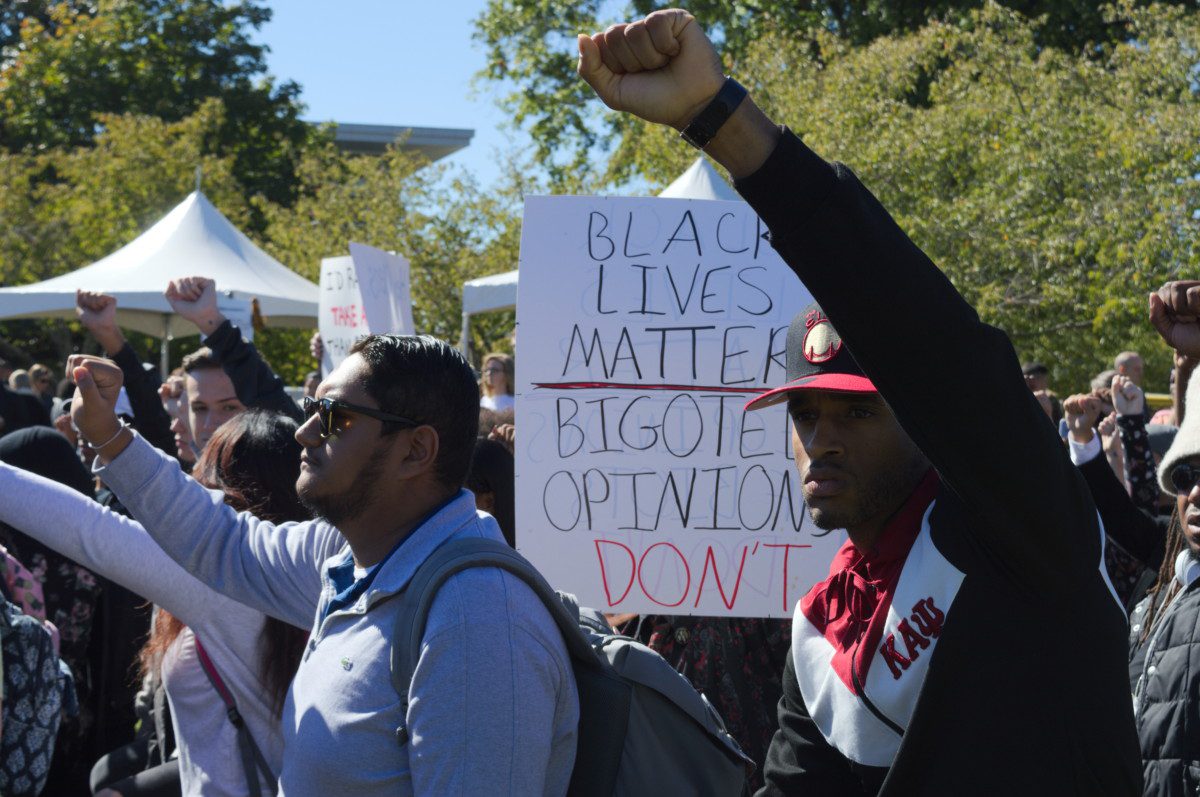 Students with signs that read “Black Lives Matter” and “Take a Knee” gathered on The Green Monday, Oct. 16, to show their support for the cheerleaders. Cooper and another student, David Corinthian, alternated giving speeches to the crowd. They urged those on the sidelines to join the movement instead of just watching and encouraged the protesters to boycott university products and services.

Before the protesters stepped off to march across campus, a surprise guest arrived. In full costume, Scrappy the Owl ran into the crowd, dropped to one knee and raised a fist in the air. The group was visibly energized by the presence of KSU’s mascot, and the protesters began their march with renewed morale.

The man behind the owl, student Kenneth Sturkey, did not seek KSU’s permission to wear the costume at the protest. In a statement sent on Tuesday, a spokeswoman for KSU confirmed that his appearance at the protest violated the official policy.

“An official request was not made to the department and the department did not provide approval for the mascot’s participation,” the spokeswoman said. “Officials with KSU’s Department of Athletics and University administrators are reviewing the situation to determine whether action may be warranted.”

While Cooper said Scrappy was within his First Amendment rights the protesters will support him, she asked that other athletes avoid wearing their uniforms at future demonstrations.

“By all means still come out and say who you are and who you represent, but just don’t wear your Kennesaw State gear when you come out here,” Cooper said. “That’s the same way that they try to change the narrative to being about Kennesaw than about what the issue really is.” 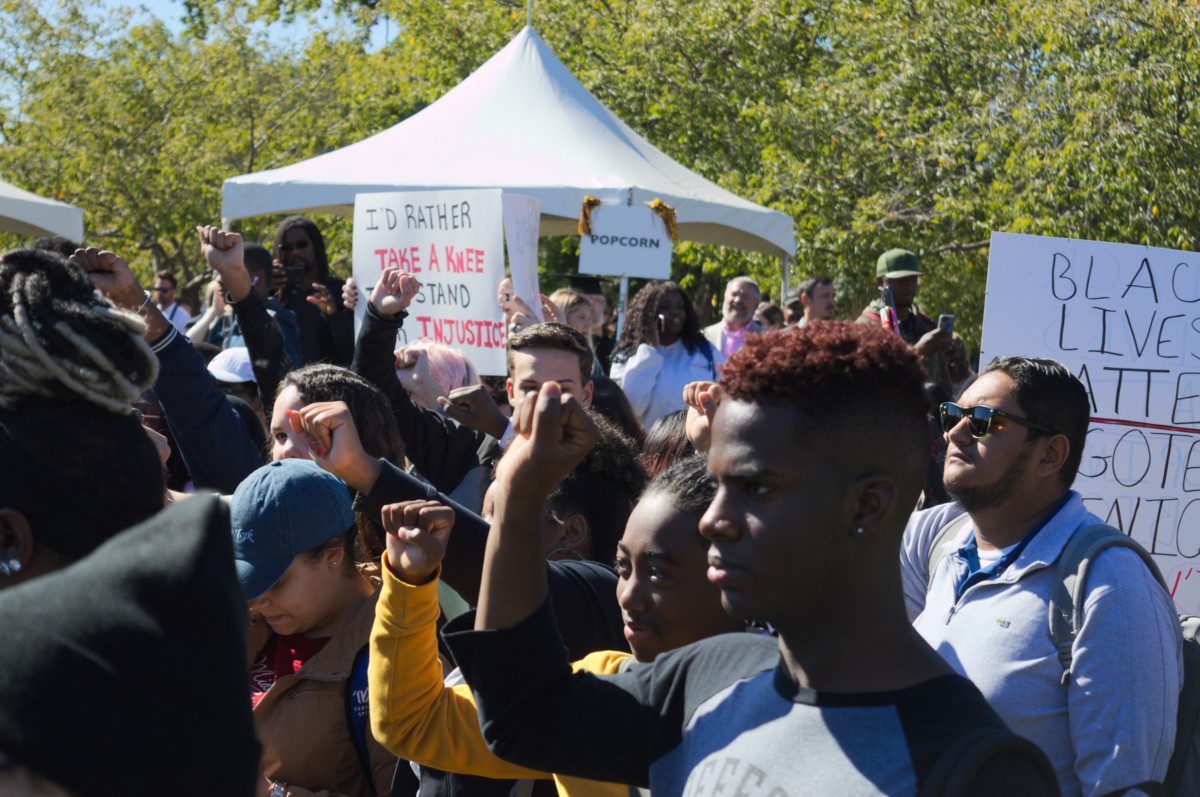 Across the university, students expressed mixed feelings on the subject of whether their cheerleaders should kneel during the anthem.

Sophomore mechanical engineering major Brooks Gillam grew up in a military family, which he said has an influence on his opinion of the issue.

“I understand what they’re trying to convey, but I don’t think that kneeling during the national anthem is the right way to convey that,” Gillam said. “Football at the end of the day is for entertainment.”

A senior public relations major, Esther Osim is a strong supporter of the cheerleaders’ protest.

“I understand it makes some people uncomfortable, but so does police officers killing people and getting off,” Osim said. “A lot of time it’s not a very comfortable environment as a minority, especially as a black female.”

After the cheerleaders’ absence during the playing of the anthem, she said she feels like the university’s administration will step in and interrupt any protest if they disagree with its message.

“I don’t really feel like I have freedom of speech at Kennesaw,” Osim said.

Cory Hancock, a senior communication major at KSU, is the editor-in-chief of The Sentinel, the university’s student-run newspaper. Hancock said he has received plenty of feedback about The Sentinel’s coverage of the five cheerleaders and the surrounding protests. Professors have emailed him about using their articles in their classrooms as a discussion of current events.

“It’s really kind of blowing up around campus and a lot of people are talking about it,” Hancock said. “I think that’s really cool to see, especially since they’re using The Sentinel student newspaper as a means of doing that.”

Besides the student population, there are also professors who choose to weigh in on the issue. Chris Martin is an instructor of English who attended Monday’s protest and offered his personal opinions on the topic in an interview.

“I think it’s important, just in general as an instructor, to be supportive of your students,” Martin said.

He writes an opinion column for a regional journal called The New Southerner, and the issues of racial injustice appear often in his articles.

“I think as a white person it’s my— it’s our primary obligation to listen with a degree of humility,” Martin said. “We really need to take what these students and what others are saying seriously — that racism is a problem.”

While he did not offer any particular opinion of KSU’s actions in the case of the cheerleaders, Martin did stress the importance of all colleges and universities allowing students to use their freedom guaranteed by the First Amendment.

“Not just Kennesaw State, I believe any institution should support students when it comes to their free speech rights,” he said.

Looking ahead for the movement

KSU will host its homecoming game Saturday, Oct. 21, at Fifth Third Bank Stadium, and protesters said they will be in attendance, though they would not give any specific details in an interview.

Shlondra Young, one of the five cheerleaders, said she is thankful for the support from protesters.

“Anywhere that anybody is showing us support, we plan on being there,” Young said.

Though the cheerleaders have been removed from the field while the anthem is played, Young said she and the other four protesters continue to kneel in the tunnel.

“They can move us,” she said, “however they won’t silence us.”