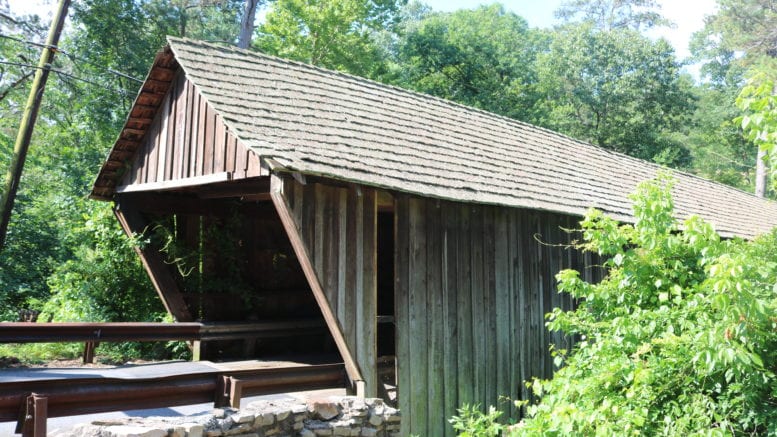 Cobb County announced on its website yesterday that Cobb will participate in an archaeological investigation around the Concord Covered Bridge to uncover the remains of the Battle of Ruff’s Mill.

The project is called the Ruff’s Mill Battlefield Project, and the purpose is to figure out the boundaries of the clash.

The battle took place on July 4, 1864, and was the result of troop maneuvers between U.S. and Confederate troops in the area between Ruff’s Mill at the site of the Concord Bridge, and the current location of Gann Cemetery.

The was part of the retreat led by Confederate General Joseph Johnston that ultimately culminated in the Battle of Atlanta a few weeks later. A notable incident during the clash was that the future governor of Ohio, Edward Noyes, who was a U.S. Colonel at the time, lost a leg in the battle.

This effort to map out the boundaries of the battle will be conducted by the Lamar Institute, a non-profit dedicated to archaeological projects in the southeastern United States. The institute received a grant from the National Park Service of over $95,000 for the work.

According to the county’s news release:

Geographic Information Systems (GIS) specialists will overlay historical maps, aerial photographs, and Light Detection and Ranging (LiDAR) images to determine potential tracts and areas within tracts to conduct fieldwork. Skilled battlefield archaeologists will conduct controlled metal detector surveys across tracts in the project area. Ground Penetrating Radar (GPR) survey will be used in select areas to assist in the locating of subsurface remains of earthworks such as trenches, rifle pits, and artillery impact craters. Archaeologists also will conduct a survey of collectors and metal detectorists to gather information on where various battle artifacts have been discovered.

Supporters of the project include, “multiple landowners within the project area, the Cobb Parks Department, the Friends of the Concord Covered Bridge Historic District, the Georgia Department of Natural Resources, the Georgia Battlefields Association, and the Smyrna Museum. Continuing efforts will be made to involve the Cobb County Historic Preservation Commission, Cobb Landmarks, Cobb County Land Trust, and the River Line Historic Area as well as area school districts, private schools, and homeschoolers.”

“While Cobb County residents appreciate and preserve their history, they cannot preserve something until it becomes tangible and locatable,” District 4 Commissioner Lisa Cupid said in the news release. “This project fulfills the need to locate and identify the battlefield and its related resources, and share the information about its significance with the community so that residents and policymakers can address the battlefield’s preservation and interpretation for the public.”

The LAMAR Institute’s Rita Elliott said, “We are excited to work with Cobb County residents, employees and organizations to use historical archaeology to locate and uncover the very important story of the Ruff’s Mill Battlefield, as well as the stories of the men, women, and children, both African-American and white, who affected the battle and were impacted by it.”