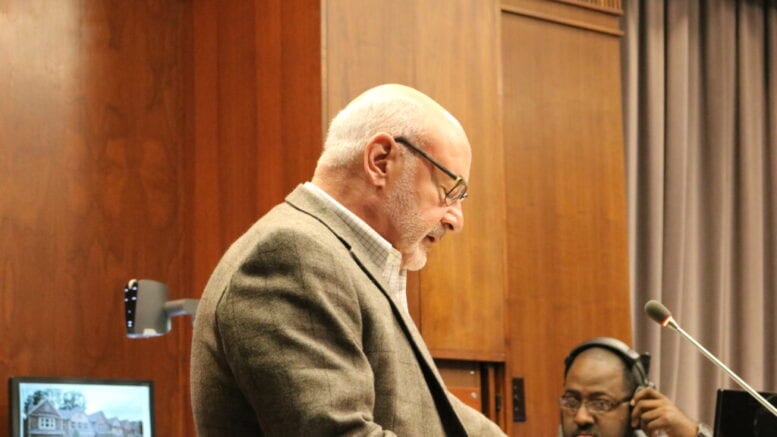 At the February zoning hearing of the Cobb County Board of Commissioners, Charles Sprayberry, the Director of Planning and Logistics for the Cobb County School District (CCSD) raised objections to a rezoning request, citing overcrowding at Mableton Elementary School as the reason for opposition..

The request, which was ultimately approved as part of the consent agenda, allows The Revive Land Group LLC to build up to 67 townhomes on Old Powder Springs Road on a site that had been zoned for light industrial (LI) use.

The school district also opposed a rezoning request on Mableton Parkway for the same reason.

Read the rezoning request by following this link

On behalf of the CCSD, Sprayberry has regularly objected to new housing development in the county because of the stress on specific local schools.

The objections have been both to housing that might attract families with children, because of overcrowded schools, and to RSL (Residential Senior Living) housing developments because of the county’s senior exemption from school taxes.

At this meeting, BOC Chairman Michael Boyce called Sprayberry to the podium, because the school district’s objection would cause the request, which had been on the consent agenda for approval without further discussion, to be moved to the regular agenda for full discussion.

Sprayberry said, “Approval of this petition, Z-18, will cause concern for CCSD, as it will result in impact to schools already over capacity such as Mableton Elementary School.”

Boyce said, “Let me ask you something … ’cause I had the same question that I think was Z-56, the first one. Is there a plan to add a high school down there?”

Sprayberry said that no new high school was planned, but that Pebblebrook was to be expanded, so the school district’s opposition to both the Old Powder Springs Road and Mableton Parkway rezoning requests was because of the effect on Mableton Elementary, not on Pebblebrook.

District 4 Commissioner Lisa Cupid, who represents the location of both the requests, said, “My desire would be for us to figure out a path forward for how we address these issues of capacity, because when we diligently work with the community and the applicant to resolve issues, coming here, it helps us to understand … what those concerns are in advance.”

“The school board is always going to have an issue with our applications, and they’re always going to bring it up at this meeting,” she said. “It would seem to me that there would be another forum where we could address the larger policy issue.”

“Because it’s very difficult for us to really give full weight to those concerns considering the significant steps that would have to be taken to build a new school,” Cupid said.

“And I certainly don’t think that it’s the direction of the school board to encourage the Board of Commissioners to not ever build residential housing, whether it be for families, or seniors,” she said. “Yet every time we have a family or senior development, we get opposition.”

“It does provide you with the information,” Sprayberry said.  “If we were not to bring this to your attention then we would be remiss in our responsibility to let you know that these are areas of concern. That’s all we’re simply saying. It’s a concern.”

Cupid said she agreed they were areas of concern, but she said the BOC zoning meetings might not be the right forum to address those issues.

She asked if there were another forum where there could be discussion of school building and capacity so that “we are not necessarily overlooking your concerns.”

“I will certainly take that message back,” Sprayberry said. “As we plan for each SPLOST program, that is an open program where we are able to address concerns where we know developments are arising.”

District 2 Commissioner Bob Ott said that during the zoning application process the applicant sits down with various county departments and goes over the plan for the county staff’s zoning analysis.  He suggested that someone from the school district be present for the preliminary plan review.

The requests for rezoning of the Old Powder Springs Road property and the Mableton Parkway property were approved, despite the school district’s objections.

The Courier reached out to the Cobb County School District to find out whether there was a list of overcrowded schools the district used to decide whether to oppose nearby residential development.

A district spokesperson wrote: “When determining whether a proposed development will impact the learning environment of Cobb students, we compare the current capacity needs of schools with the Ed-SPLOST projects that are either currently under construction or planned for in the future. For example, an Ed-SPLOST project is currently out for solicitation to increase the capacity of Pebblebrook High School.”

Watch the video of the discussion below