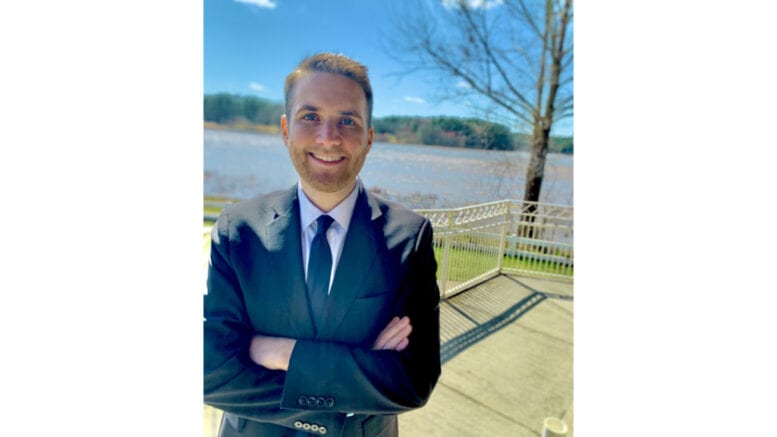 Kyle Rinaudo is running for Georgia State House of Representatives for House District 35. The 24-year-old Acworth native ran for the position in 2018 but lost in the primary to Salvatore Castellana.

Rinaudo said that when he returned home from Georgetown University in 2018, he planned to get involved with the campaign against the incumbent, Republican Rep. Ed Setzler. When he learned that, at the time, no one was planning to run against him, Rinaudo decided to put his hat in the ring.

After the primary, he supported the Democratic candidate Castellana who ultimately lost in the general to Setzler.

Castellana has endorsed Rinaudo for this campaign.

Rinaudo said a conversation with his mother after the passage of House Bill 481, the “Heartbeat Bill,” sponsored by Setzler, inspired him to run again.

She emphasized to him the difference he could make in the lives of millions of Georgians if elected.

Specifically, Rinaudo said that just over 1,000 votes separated Castellana and Setzler in 2018 and it was those votes that helped lead to the introduction and eventual passage of “one of the strictest anti-choice [pieces of] legislation in our state’s history.”

Rinaudo said this speaks to the importance of individual participation in democracy and local politics.

Upon returning home to Acworth after earning his undergraduate degree in international politics from Georgetown, Rinaudo began working for a local law firm and teaching music part time with public school percussion students.

Rinaudo said he views teaching as a “meaningful opportunity to work with and shape the next generation of Georgia” and that belief extends to his political motivations as well.

Rinaudo said he thinks it is important to involve more young people in politics and not only does his work with public school students encourage that, he, himself, is representative of the unique perspective younger generations are able to bring to politics.

He said that his youth makes issues like climate change and education reform more concrete. For example, Rinaudo identified climate change as not a hypothetical issue but one that will impact his family in the near future.

Further, he doesn’t view education policy as impacting theoretical students, but his own students who “are dealing with the reality of paying for college and lack of education funding right now.”

Public education is a central issue to Rinaudo’s platform. He said that because Georgia representatives are not in the classrooms everyday like he is, they are not taking education issues as seriously.

Rinaudo said that while recent proposals such as Governor Brian Kemp’s to raise teacher pay are great, “I am in the class room every day and it’s not just about teacher pay. There are so many other systemic issues that we must address. It’s also about resources, class time (and) educational standards.”

He said that, if elected, he would make sure that “every student has access to a great education in the state of Georgia.”

Rinaudo also identified access to healthcare as “the biggest issue.” In the status quo, he said healthcare is “too expensive, inaccessible, (and) unaffordable.”

He said he supports plans to expand Medicaid, which would ensure that tens of thousands of people would have access to healthcare. Rinaudo also said that an important aspect of healthcare is reproductive freedom as it “directly impacts every single person.” He said, “The fact that we have a representative that criminalizes [reproductive freedom] speaks to the lack of connection to the needs of our community.”

Rinaudo also said that “people in this community know those decisions should be made by themselves with their family not state government.” He emphasized multiple times that one of his main motivations for running is to help bring pro-choice representation to the legislature.

Rinaudo said environmental protections will also be a priority of his if elected.

He said that while “they [environmental issues] seem abstract, theoretical [and] hypothetical, it’s only within the next 5, 10, 15 years that we will see impacts.”

Regarding recent legislation about the coal ash plant, Rinaudo said he supports proposed legislation that requires coal ash to be disposed of in a clean way and that this should be a “no brainer.”

In a Facebook post on this issue, Rinaudo said the following – “For decades, the ash from Georgia’s coal-fired power plants has simply been buried in the ground—leaving our community’s groundwater and soil vulnerable to toxic pollution. I think we can all agree that in 2020, this needs to change.” He said it “concerns [him] greatly that we have one [a plant] in Cobb County that is being allowed to pollute our water.”

Rinaudo said that he “hopes that bill passes because it is so urgent” and, if elected, he would continue to support similar legislation.

Regarding the Sterigenics facility, he said he supports current legislation requiring transparency. Specifically, Rinaudo said, “We need representatives that are going to fight for transparency as a basic function of our government.” Rinaudo said that “Environmental issues are community issues,” and people have the right to access to clean air and water.

Speaking about other primary challengers in this race, Rinaudo said, “ I would like to welcome them to this race [and] all I can do is continue to make the case for the issues that are important to me and this community.”

The Democratic primary election for House District 35 will be held on May 19, 2020, followed by the general election on November 3, 2020.