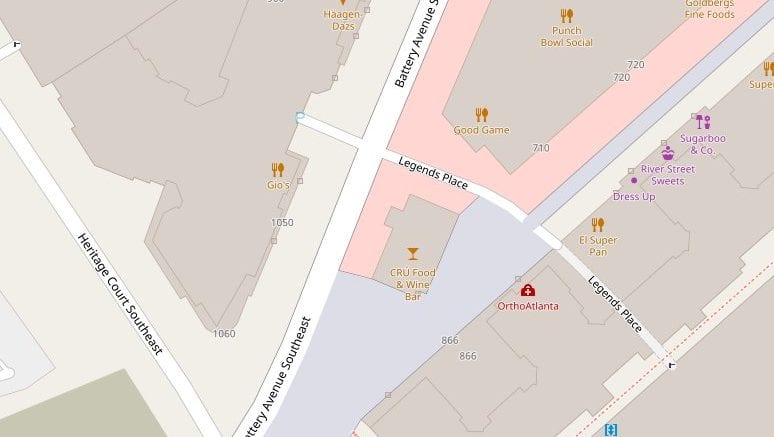 map of Legends Place at The Battery from Open Street Maps

Fat Tuesday, a daquiri shop founded in 1984 in Atlanta that grew into an international chain of locations, will be opening in the Battery later this summer.

According to a press release from the Braves Development Company, “The 1,118 square-foot space will be located across from El Super Pan, on the corner of Battery Walk and Legends Place.”

“The convenient walk-up counter-serve layout at Fat Tuesday is perfect for visitors to grab a cold drink before or after enjoying one of the many shopping and entertainment options,” said Jeremy Strife, EVP of Development. “Our dining concepts are sought out especially for their uniquely curated beverage programs and Fat Tuesday’s popular frozen cocktails build on that trend.”

The press release also states, “Fat Tuesday, a sister concept of New Orleans Original Daiquiris, was launched in 1984 with the opening of the first retail unit in Atlanta, Georgia. The concept has grown into an international phenomenon with over 20 retail units throughout the United States, Mexico, Puerto Rico and Honduras in cities such as Miami, Key West, Las Vegas, Cozumel, San Juan and Roatan.”

Drink flavors at Fat Tuesday will include, “190 Octane, Hurricane, Pina Colada, Strawberry, Jungle Juice, Bellini, Margarita and more. Guests will have the opportunity to combine flavors and choose from souvenir cups of various sizes.”

About The Battery Atlanta

In its promotional material The Battery is described as follows:

The Battery Atlanta, a 2 million square foot mixed-use development, located at the intersection of I-75 and I-285, features boutique shopping, chef-driven restaurants, an Omni Hotel, The Coca-Cola Roxy, 531 residences, Two Ballpark Center loft office home to SPACES, Three Ballpark Center home to thyssenkrupp, and One Ballpark Center, Comcast’s regional office headquarters.  Powered by Comcast’s all-fiber network and delivering multi-terabit capabilities, The Battery Atlanta has the highest-capacity network serving any mixed-use development in the nation. For more information on The Battery Atlanta please visit batteryatl.com or connect on Facebook, Instagram and Twitter.

Arrests made in Cumberland Mall shooting