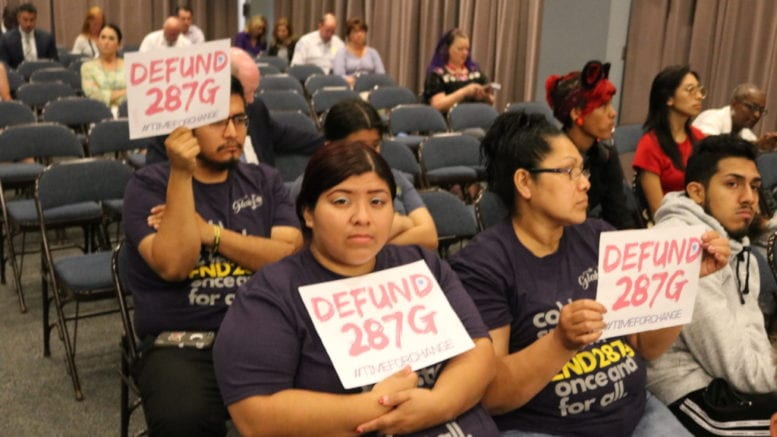 Newly elected Cobb County sheriff Craig Owens has committed to getting rid of the county’s participation in the 287(g) Program, a program of the Immigration and Customs Enforcement (ICE) agency that targets undocumented immigrants for detention and possible deportation.

Current Republican Cobb County Sheriff Neil Warren and then-chairman of Cobb County’s Board of Commissioners Sam Olens signed a Memorandum of Agreement with ICE, part of the Department of Homeland Security, Feb. 12, 2007.

The MOA, renewed by Warren this past June, uses ICE’s Jail Enforcement Model.

In Cobb, ICE’s 287(g) JEM model has ICE train 12 sheriff’s deputies to be able to question the immigration status of anyone who is arrested and detained at the Cobb County Adult Detention Center.

The JEM model also allows deputies to issue warrants and arrest people who are suspected of immigration violations who served time in the jail and turn them over to ICE custody. Sheriff’s deputies are also allowed to interview, fingerprint and photograph undocumented immigrants for ICE to review.

A controversial program that has sparked protests from immigrants and allies, Cobb County was the first county in Georgia to implement the 287(g) program.

Although ICE bills the 287(g) Program as a way to get violent criminals off the streets, there exists little evidence that this is true.

A report by non-profits Project South and Georgia Latino Alliance for Human Rights found that the majority of 287(g) arrests in Cobb were for either traffic violations or no violations at all. In fiscal year 2018, the percentage of ICE arrests in Cobb with low-level crimes or no convictions was 84 percent.

Additionally, the report points to racial profiling of mostly Latino and Black immigrants through the 287(g) program by sheriff’s deputies. The report states that the vast majority of immigrants detained by ICE have a “dark or medium complexion.”

Since election day, Cobb and Gwinnett have both seen the first Black sheriffs elected — Owens and Keybo Taylor, respectively. Also similar is their commitment to ending the 287(g) program in their respective counties.

Owens, in a phone interview with the Courier, said he has not seen any data that says mostly violent criminals are being arrested through the 287(g) program.

Furthermore, Owens said that through his research on the program he found that the director of Homeland Security said that the program is not being run as it was intended to. Owens believes ICE arrests are a function of the federal government, not local sheriff’s offices.

Owens said he would first look into the contractual obligation the county is in with ICE and then make an assessment of what the county can and cannot currently get out of the contract with.

Ending the program does not mean the sheriff’s office will stop complying with ICE.

The sheriff-elect said if ICE has undocumented immigrants that need to be held along with a warrant then the sheriff’s office will comply and hold the person at the detention center and do “everything that goes with it.”

Owens said the difference between the 287(g) program and complying with ICE is that he will not give deputies power to work as ICE agents.

The 287(g) program is expensive for Cobb to maintain, Owens said.

“I don’t have all the numbers because of course, all the information has not been released to me to give you how expensive it is but I can tell you it’s expensive for us to run from everything I’ve been told,” he said.

The high cost of maintaining the program is because of overtime hours, the training, hours on the job and multiple salaries, Owens said.

Outside of the costs of the program, Owens also discussed the social benefits of ending the 287(g) program. He said it can help restore trust between the sheriff’s office and immigrants.

A survey said that community members are less likely to report serious crimes like domestic violence for fear of being arrested for immigration violations.

“We hope that [immigrants] report crimes and things happening in their community versus now hiding it,” Owens said. “I think it will put the sheriff’s department in a different light, meaning it’ll give us and them that more community relationship that we need to bridge that gap.”

Owens said ending the program would also just simply be a great thing for Cobb County to do.

Owens said he has heard of Latinos and Black people being racially profiled through the 287(g) program despite not personally witnessing it.

The stripping away of the 287(g) would still allow for Cobb to be a good and safe community, Owens said.

“I just don’t think the overall arching effect has been what was posed as being done,” Owens said. “So I think me as a sheriff, I think we can keep Cobb safe and assist [ICE] as we can but not be an active participant in the program.”

Owens said that the 287(g) program is losing steam and agencies are beginning to leave the program.

Owens’ goal is to make the wider community unafraid of sheriff’s deputies. He mentioned that the Cobb County Police Department, who are not participants in 287(g), wear blue uniforms while the sheriff’s office wears brown uniforms.

“If [immigrants] see blue you can stop and talk to them,” Owens said. “If you see brown, you run because they’re immediately thinking that a sheriff’s deputy is there for immigration to try to arrest them and so it creates a disconnect … with the community as well.”

Owens said Cobb cannot allow for this disconnect to continue and immigrants should feel safe to report a crime that has happened to them.