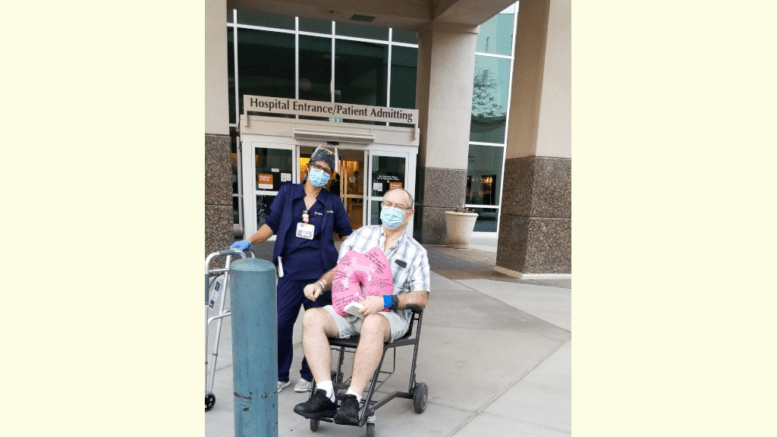 A retired Marine living in Acworth received a life-saving double lung transplant after experiencing breathing problems during a work trip.

Nicholas Blehm, a flight engineer at Lockheed Martin, underwent the surgery last August, at the Dignity Health St. Joseph’s Hospital and Medical Center in Phoenix, Arizona, and it made a world of difference in his quality of life.

Asked by the Courier to tell a little about his background, he said, “I joined United States Marine Corps right out of high school.”

“I was still in high school when I got married,” he said. “I’ve been married to my wife now for 46 years.”

Blehm said he loved his work, and enjoyed going in every day.

“So I went to my doctor, and my doctor thought it was a heart problem, so he sent me to see a heart doctor,” said Blehm. “They scoped my heart and said, ‘Nope, nothing wrong with your heart.'”

“So then I went back to my doctor, and he says, ‘Well, if it’s not your heart it’s got to be your lungs’, so he sent me to a pulmonologist,”
he said. “They took some X-rays and CT scans, and they said that I had a little bit of fibrosis, and a small infection that they took care of.”

Blehm said at that point his doctor thought everything was fine.

Then last January he went to Colorado Springs on a work assignment.

“I was doing great,” he said. “I did my preflight inspections and all that stuff.”

“And then one day, after being there for about a week, I started hacking and coughing and having trouble breathing,” Blehm said. “And I went to work one day, and I couldn’t even walk through the plane. I was just out of breath and couldn’t do anything.”

He called his doctor back in Georgia, who prescribed antibiotics. They worked somewhat, but he still didn’t seem to get better, so a colleague took him to an urgent care facility, where he was diagnosed with pneumonia in his left lung.

The doctors in Colorado continued him on the antibiotics, but his low stamina persisted, and back in Georgia he was diagnosed with pneumonia in both lungs.

His Georgia doctor prescribed more antibiotics, and told him to go to the emergency room if he began feeling worse.

He continued to decline and went to the emergency room.

The emergency room doctors determined that pneumonia might not be the problem, and that it might be Idiopathic Pulmonary Fibrosis, or IPF.

He was then sent to a specialist in IPF.

She said he had what pulmonologists call “ground glass” because of the way it looks on a CT scan.

After prednisone treatments cleared his lungs enough for the doctor to make a diagnosis, she said that the IPF had progressed to the point that he should get evaluated for a lung transplant.

Blehm traveled to Phoenix, and was evaluated by the hospital’s Norton Thoracic Institute.

The doctors there told him he needed an immediate transplant. He was put on the list, and within a few weeks, in August of last year, he received the transplant.

“(On) August 19 I was called and told to come in and then they had lungs for me,” Blehm said. “That day I was in the hospital. And I don’t remember another thing until I woke up a couple days later.”

“I had new lungs. I was breathing on my own. I felt a lot better, although very, very sore,” he said, “And my recovery began.”

“Fortunately for me, I listened to my doctors before I went in for surgery. I did all of the exercises that they required to make sure that I was strong and ready for this procedure,” he said.

“Within eight days after having my my surgery the doctor said I needed to get out of the hospital. I was doing too well. They didn’t need me in there because they’re sick people in there,” he said, “and they didn’t want me to get sick.”

“I was kind of shocked, because I could barely get out of bed, let alone take care of myself,” he said. “But I had my wife there. We went to a hotel that was booked by the hospital because I had to go back and forth a lot.”

“And I just kept getting stronger and stronger every day. And within a week or two I was up walking around doing whatever I needed to do,” he said.

Blehm said the doctors told him the speed of his recovery was amazing. His lungs were clear, and his liver and kidney functions were strong.

The only bad side effect is that he now has diabetes, he said, a common side effect of transplantation. Blehm said he now has to administer insulin shots four time a day.

He was allowed to return to Georgia, with periodic trips back to Phoenix for checkups.

“I was told that I was completely cured from my IPF,” he said. “I have no more restrictions on me whatsoever.”

“I can go do exercises, whatever I want to do,” said Blehm.

“The only thing I have to be careful of, is making sure that I don’t get any kind of infection, stay away from people that are sick, and don’t eat certain kinds of foods that might be harboring salmonella or something like that,” he said. “And to keep an eye out for rejection.”

“And then, of course, COVID is going on right now, so I have to be very careful with that,” he said. “It’s a lung infection, and I have no immune system whatsoever anymore.”

A conversation with the surgeon

After talking with Nicholas Blehm, the Courier spoke with Dr. Jasmine Huang, a surgeon on his transplant team.

“As a cardiothoracic surgeon who has trained in lung transplants, I see lung transplants as one of the more complicated operations that we do,” she said. “And not only is the operation difficult, but the transplant in of itself requires patients to have lifelong care afterwards.”

“We here at Joseph’s Norton Thoracic Institute, have put together an amazing team of physicians, nurses, social workers, (and) ancillary staff, who are incredibly experienced now in taking care of these patients,” she said. “Our institution has performed more than 900 lung transplants on patients from all over the country, their ages ranging from 15 to 79.”

Huang said that in lung transplantation, the lungs have to be taken out one at a time.

“Unfortunately, some of these patients are so sick that their lungs aren’t strong enough for us to do the operation just breathing on one lung while we’re trying to transplant the other lung,” she said.

“Sometimes there can be issues with their heart, with their oxygen, (and) sometimes we have to use a special pump machine, a bypass pump that does the work of the breathing for the lungs.”

” Sometimes the surgery itself can be very stressful on the heart as well. So there are things that we have to worry about (when) we’re working with the major blood vessels that are off the heart,” she said.

Huang said there are also significant issues of coordination and timing in lung transplantation.

“Ideally we’d like the lungs to be transplanted within six to eight hours from when the lungs are removed from the donor, because we found that that that gives them the best chance of working most effectively to transplant,” she said.

Asked what the care is like when patients leave the hospital, Dr. Huang said, “It is a lifelong commitment.”

“The patients are on a number of medications to help fight rejection (and) help fight infections,” she said, “and initially, it is pretty rigorous.”

“When they are discharged from the hospital, they do have to come back to the clinic three or four times a week to make sure they are progressing appropriately, and that the levels of the medications they require are appropriate.”

“As they improve it then decreases to one or two times a week, and less and less … once a week, once a month,” Huang said.

“They get a surveillance bronchoscopy procedure where they use a scope and look inside the lungs,” she said, “and that’s done by a pulmonologist. They get those routinely as well. So it is a lifelong process and commitment for the patients.”

The Courier asked Dr. Huang if there was anything else she thought readers should know about lung transplantation.

“I think really the most important thing for readers to know about is organ donation, because patients could not receive these life-saving transplants if there were not those individuals who were so kind and generous and selfless, to become organ donors,” she said.

Acworth, GA in the 1950 census: How to get at and start using the recently released individual records