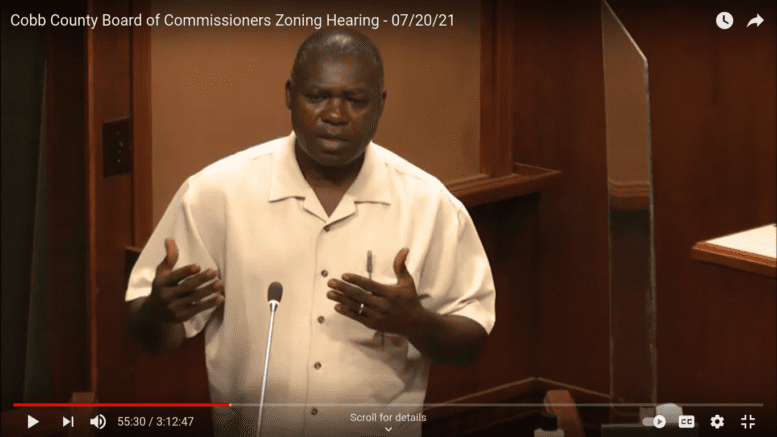 After a complicated discussion at the Cobb County Board of Commissioners’ zoning meeting last Tuesday, the applicant who requested a rezoning for the purpose of an auto repair shop and an online furniture sales warehouse on Veterans Memorial Highway in Mableton withdrew his application without prejudice.

The withdrawal will allow the applicant to continue negotiations with the community and the district commissioner and resubmit an application at any time without paying an additional filing fee.

The property is adjacent to the City of Austell, whose borders are to the west and north of the site. The nearest intersection is Veterans Memorial Highway and Davis Drive.

The applicant was Austell-based Century Construction and Technologies Inc., represented at the meeting by company President Thomas Orok.

Orok said his company is flexible about what kind of use the property is put to, and will consider moving a nearby retail business currently at one of the company’s properties to the Veterans Memorial site, but added that a loan was taken out to purchase the land, and whether or not there is an occupant, his company still has to repay the loan.

The application was opposed by Robin Meyer, the zoning chairperson for the Mableton Improvement Coalition.

“We are recommending denial of the rezoning petition, primarily because of the saturation of auto-related uses in this corridor,” Meyer said. “As you know, this section of Veterans Memorial both in Mableton and Austell is flooded with automotive uses.”

“And it makes it difficult for other businesses to find a good location to grow the kind of business community that we need for our growing residential population,” she said.

Meyer also questioned the use of the property as a warehouse for online furniture sales, citing the lack of truck access to the property.

District 4 Commissioner Monique Sheffield initially made a motion that the request be denied outright, citing the same concerns as Meyer about the saturation of the area with automotive uses.

Sheffield thanked Orok for considering District 4 as a place to do business, but continued, “However, in an effort to attract different different types of businesses to the community, I must place limitations on auto related establishment as as you heard, it is also my opinion that auto repair shops have saturated the area.”

BOC Chairwoman Lisa Cupid then said that the GC category did not line up with the future land use map. Zoning Manager John Pederson agreed that the current zoning did not align with the land use map, and that it should be corrected.

After further discussion Sheffield withdrew the motion to deny, and Orok was offered the chance to withdraw the rezoning request with the ability to negotiate a new use with the community and resubmit with no required waiting period and no new application fee.

He agreed to this.

According to the county:

The GC district is established to provide locations for retail commercial and service uses which are oriented toward automotive businesses, are land intensive with a need for major road access and visibility, are generally not listed as a permitted uses within the NRC (neighborhood retail commercial) and CRC (community retail commercial) districts or may have existing stipulations and conditions that limit certain intensive uses and are located in areas delineated within a community activity center and regional activity center as defined and shown on the Cobb County Comprehensive Plan: A Policy Guide, adopted November 27, 1990. Any existing GC district, developed or undeveloped, located within an area delineated within an industrial-compatible area or industrial area as shown on the comprehensive plan, shall be deemed to be a grandfathered, nonconforming use after January 1, 1991, and subject to those provisions contained in this chapter.

The CRC district is established to provide locations for retail commercial and service uses which are designed and oriented to serve several neighborhoods making up a community. Projects developed within the CRC district should be done so as compact unified centers. CRC districts should be located on properties which are delineated within a community activity center and regional activity center as defined and shown on the Cobb County Comprehensive Plan: A Policy Guide, adopted November 27, 1990. Additionally, the desired quadrant location will provide for planned developments and one-destination shopping and service locations to serve the community, and will minimize traffic congestion.

Looking ahead to 2040 in Smyrna