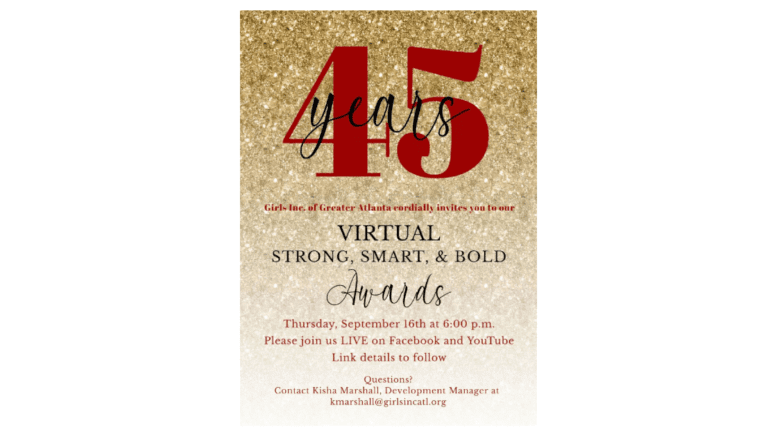 Girls, Inc. announced that its virtual Strong, Smart, & Bold Awards will be held next Thursday, September 16 at 6:00 p.m. You can RSVP and sign up to watch the live-streamed ceremony at this link.

The ceremony’s purpose is to “award three strong, smart, and bold girls with a scholarship in recognition of their commitment to education, social activism, and breaking through cultural barriers.”

Girls, Inc. founder to be recognized

The ceremony will include recognition of Joyce D. Parker, the founder of Girls, Inc. Her role was described in the announcement of the ceremony:

In 1973, Joyce saw the need for a safe place for girls to spend their time after a 9-year-old girl was found raped and murdered in Marietta.

Joyce did not rest until her vision for a girls club became a reality.

As the founder and first president, Joyce was instrumental in securing the funding, land, construction, staff, and community support for the Cobb-Marietta Girls Club, which later became Girls Incorporated.

Girls Club programming officially began in 1976, and Parker’s two daughters were some of the first girls to participate.

Joyce also served as vice president of the Girls Inc. national organization’s board of directors.

The national organization that later became Girls, Inc., the National Girls Clubs, was founded was founded in 1864 to serve girls and young women who were experiencing upheaval brought on by the Civil War.

Girls Clubs, Inc. of Greater Atlanta was founded in 1974 after a nine-year-old Cobb County girl, Debbie Randall, was found raped and murdered.

Irma Glover and Joyce Dunaway Parker decided that the abduction was in part due to the lack of a safe after-school environment for girls.

They approached the Marietta City Council and the Cobb County Commission to get land to create the Cobb-Marietta Girls Club, which later became Girls, Inc. of Greater Atlanta.