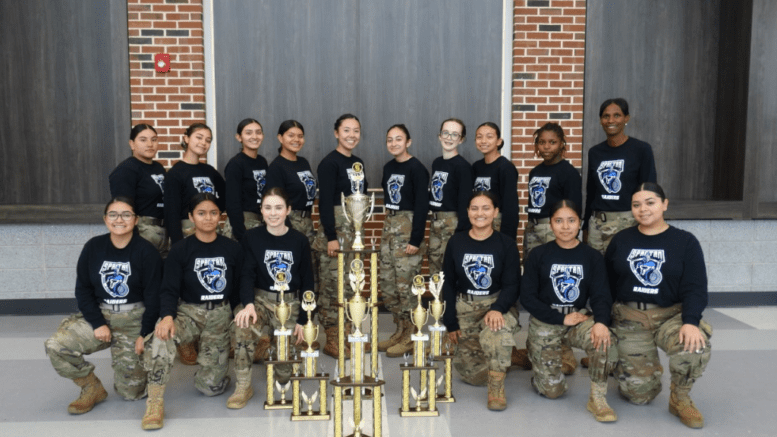 Campbell was in Tier 3, the largest category, and won against high school teams and military academies from across the State of Georgia.

The team had the following members:

“This year was our female raiders rebuilding phase, which motivated us to work twice as hard,” Team Captain Arreola said. “After our first competition, we saw what teams we were up against and the competition they provided us.”

“Everyone embraced the challenge and pushed each other to improve and reach new heights. With a great start we were able to place second overall, but our hunger to be at the top only inspired us to strive for first place,” she said. “This season, we built trust in each other and continued to work as a team, which led us to the place we are now, State Champions. Our time and effort truly paid off!”

CHS Raider Coach SGM McCabe stated “I’m extremely proud of both teams, they have been laser-focused, resilient, and determined to perform at their very best at practice and in competitions throughout the season. Campbell High School is excited to share in this historic victory for the Female Raider team. We want to thank all of the parents and leadership team for their unwavering support during the season”.

What is a Raider Competition?

The Raider Nationals web site describes the competition as follows:

Raider Competition or “Raider” as it is more commonly known is a very popular athletic competition held within Junior ROTC programs around the United States. It is the Junior ROTC equivalent of the Army ROTC “Ranger” competition in college, only far less dangerous but very challenging as well! The events are held outdoors in state parks or large expansive wooded areas. The better competitions have plenty of parking and sleeping areas for spectators and participants on-site, as well as concessions and other amenities to make the event fun for all.

Campbell Spartans Softball finishes season, says goodbye to seniors who ‘left the program better than they found it’