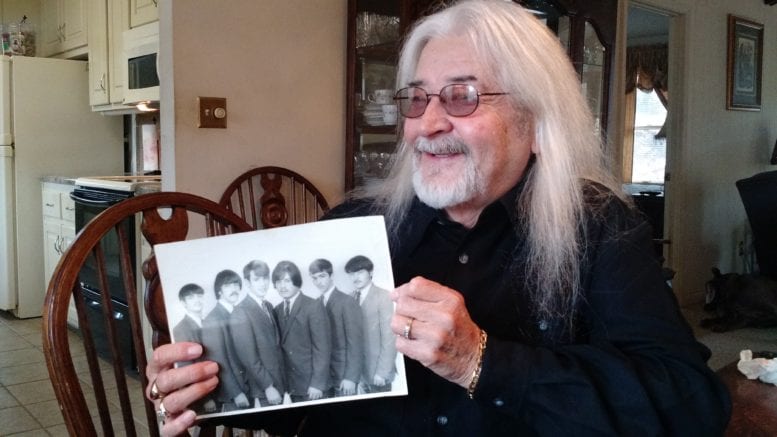 If you were a teenager in Cobb County in the 1960s, you wanted to see The Shams. That’s all there was to it.

An unmatched cover band at the time, the group was started by an uncle and nephew team, quickly grew into a six-piece set and dominated the local music during the middle portion of the decade. The Shams won regional battle of the bands competitions, performed on local radio stations and at clubs and schools across metro Atlanta.

And they were teenagers.

“I had a fan club at age 15,” said Barry Poole, the band’s lead singer, who still lives in Mableton as a retiree. “I was a showman.”

The group was started by Bobby Moon and Steve Bryant, an uncle and nephew separated in age by only 18 months. The pair received Sears Silvertone guitars for Christmas, quickly learned to play them and started the band circa 1963. Instrumental rock music was big at the time, but the pair decided they wanted a singer, which is where Poole entered the picture. 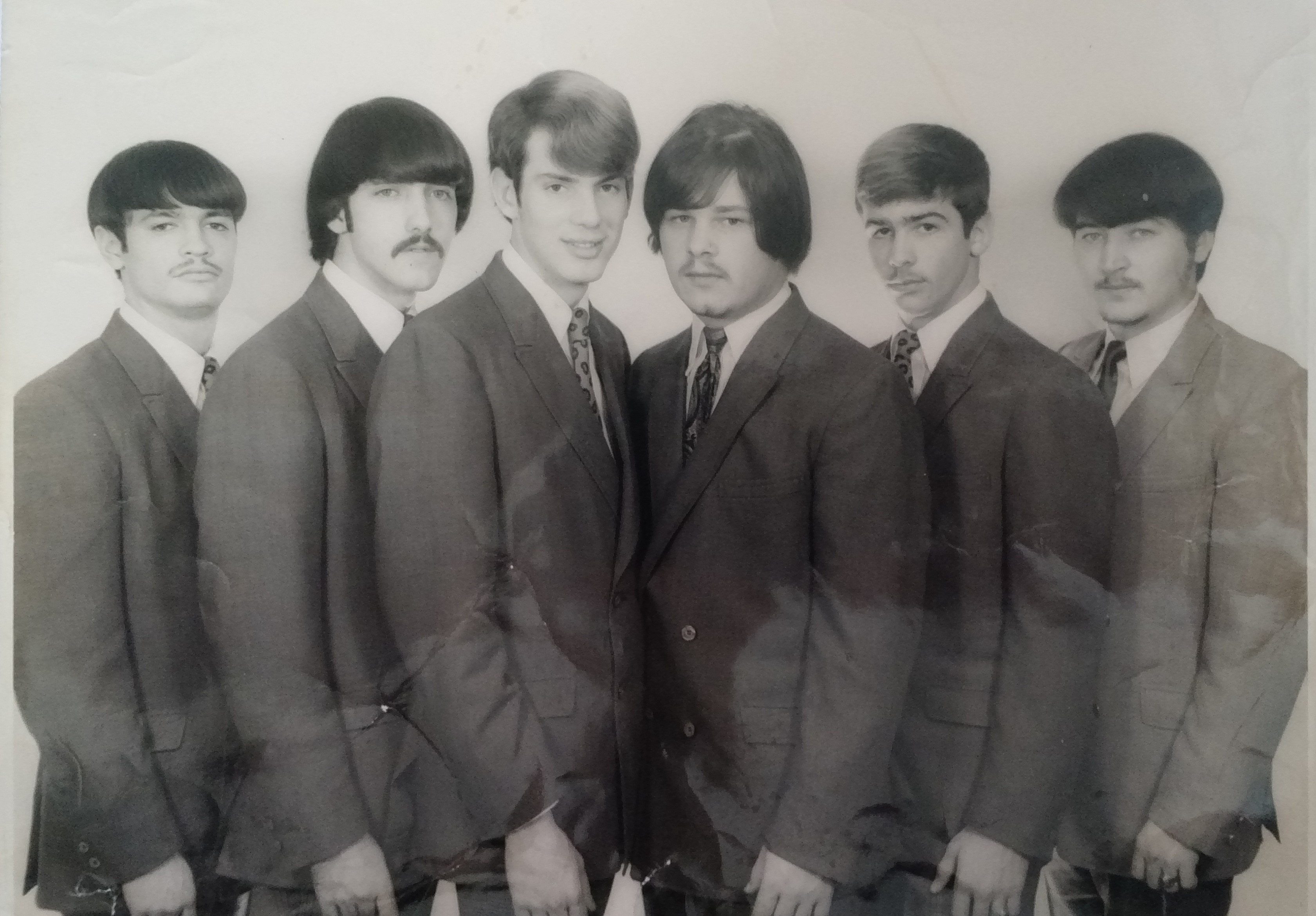 The Shams in the 1960s — courtesy of Barry Poole, reproduced by Haisten Willis

Poole was singing as early as the first grade, though at the time was a football player for South Cobb High School. For a while he balanced both football and the band, but two factors changed his mind. The first was that his locker was raided after missing a single football practice to play a gig. The second was that cheerleaders really, really liked The Shams.

“Quitting football was probably the best thing I ever did,” Poole said.

Along with Poole, Moon and Bryant, the  other members included Steve Thompson, Rhett Wynn, Wayne Martin and Danny Martin. While Poole was the lead, all were strong singers and harmonizers.

The Shams quickly picked up gigs like the “Big Hubaby Hopparooney” at a venue on Highway 41 near Cumberland Mall. They performed at shows hosted by local radio stations like WFOM, a Marieta-based Top 40 channel, and won a battle of the bands hosted by WPLO.

“There were eight or ten bands there, and we just tore ‘em up,” Poole said. “That (WPLO) show really started us off.”

Poole nearly quit school because of all the excitement and attention generated by the band. Instead, he was persuaded to transfer from South Cobb to Pebblebrook, where all but one of the other band members attended (appropriately enough, bass player Steve Bryant attended Bass High). Before leaving the school Poole was named most talented male in the yearbook.

The band began playing at colleges and high schools all over the state, and at venues like South Cobb Skating Rink. They played the Alpha Tau Omega fraternity for Auburn University’s homecoming one year.

“I thought I was John Lennon,” said Poole, a self-described hippie who still plays music from the era at home. “I thought I had his moves… people even told me I looked like him.”

He did not play an instrument in the band, instead performing his own personal gig up front.

Poole describes it as a “James Brown show” where he’d run all around the stage and even throw his tie and jacket into the crowd (aimed carefully at a friend who later returned them). The whole band also kept their hair as long as possible, cutting against the norms of the time. At 69, Poole’s hair is still as long as ever.

The Shams operated as a cover band and never had much success with originals. They played music from the era’s biggest acts: The Beatles, The Rolling Stones, Otis Redding, Jackie Wilson, Van Morrison, Wilson Pickett, The Byrds, Chubby Checker, The Swingin’ Medallions, The Box Tops and Elvis Presley. 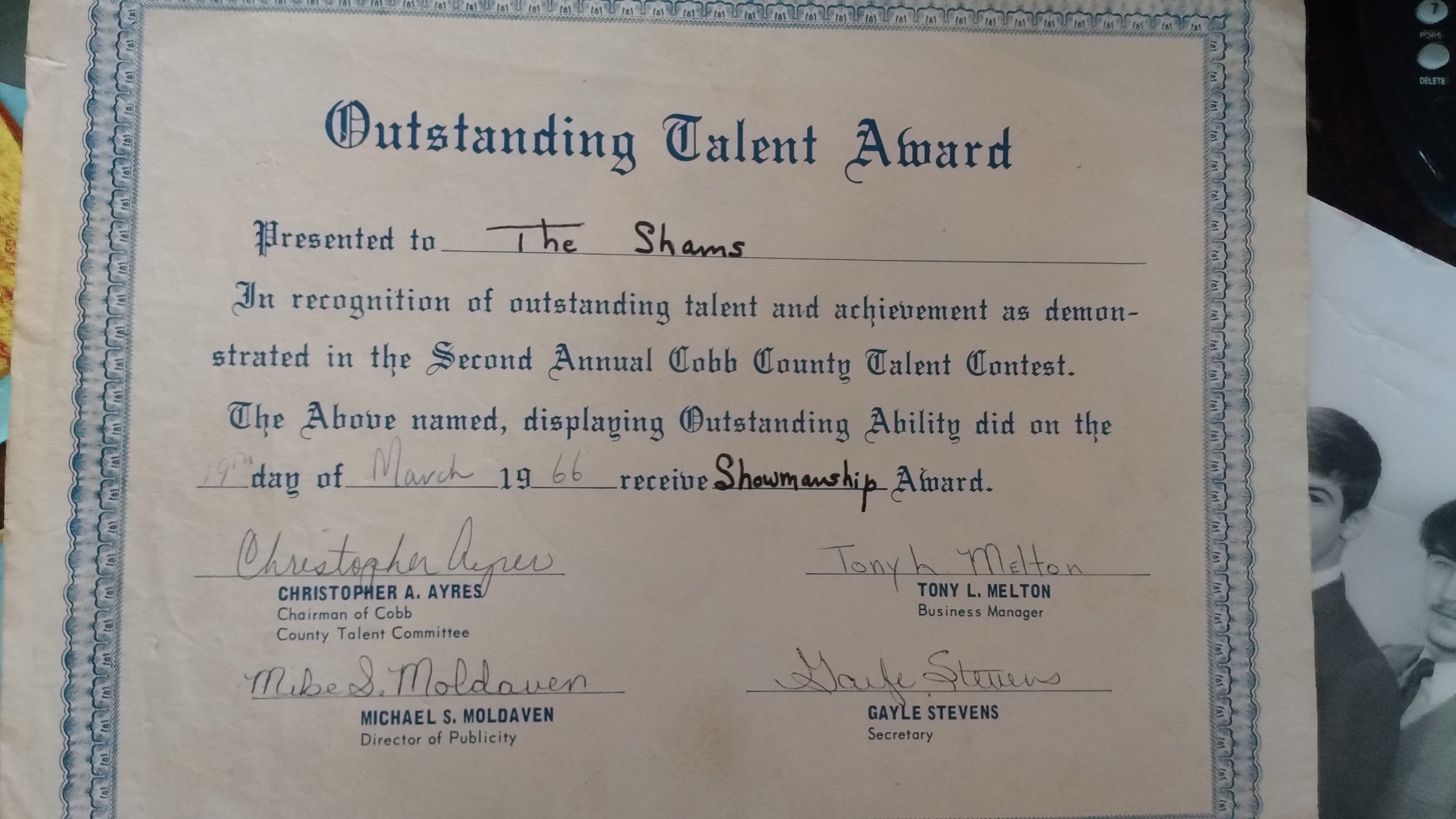 After playing in the coastal city, they were sure they’d won. Instead, the group learned they’d been deducted points for breaking the rules (throwing ties and jackets into the crowd was strictly off limits) and settled for a fourth-place result.

The fun ended abruptly when Poole and most of his bandmates were drafted into the United States Army. For Poole, the note came in the mail in June 1968. A letter from President Lyndon B. Johnson ordered the 20-year-old to report just over a week later.

“I went from a rock star to a soldier in nine days, went from long hair to no hair,” Poole said. “We all knew we’d get drafted. There was a saying, ‘a rich man goes to college and a poor man goes to Vietnam.’”

Eventually the entire band was drafted save for Wynn, the saxophone player. Poole remembers the surreal experience of hearing Cream’s “White Room” playing on a transistor radio his first night in the service. He’d been performing rock songs just like it less than two weeks prior.

Poole did avoid Vietnam, spending much of his two-year stint in the Army stationed in Germany. He credits the experience for helping him to grow up and mature, but that’s not to say he left music behind. Poole performed in a four-piece band even in the service.

When it was all over he returned to the Mableton area. The band played sporadically but wasn’t able to sustain its previous success and more or less disbanded a few years later.

In 1988, a reunion for South Cobb High and Pebblebrook High brought them back together. The Shams once again were a huge hit and enjoyed another five-year stint. Thompson had become a state representative and earned a place in the state senate in 1990. The second edition of The Shams played some of his campaign events and at local venues like the Mable House Amphitheatre until disbanding for good in 1992.

Today Poole has been married for 40 years, is retired and enjoys his children and grandchildren. He still performs, but rarely and only in private settings.

The memories are still fresh of intense nervousness backstage ahead of a gig, which instantly disappeared once the first notes rang out of the guitars. It was a different era, and not just in music.

A local gig at what was then known as Lindley Junior High School was featured in the Atlanta Journal-Constitution.

In the paper’s Sept. 2, 1967 edition, the players complained about playing outside for the school dance, where they wouldn’t sound as good, and about getting their long hair cut to comply with district rules.

But the demand for their services was too great to pass up. A Lindley athletic booster said in the story, “we could have gotten a band like Guy Lombardo, and it wouldn’t have drawn a hundred people. The Shams are the ones the kids want to hear. And that’s who we got.”

Why was Six Flags built in Cobb County?

National Night Out on Riverside Parkway

The Triumphant Return: The story of Endre Jenkins and his musical journey