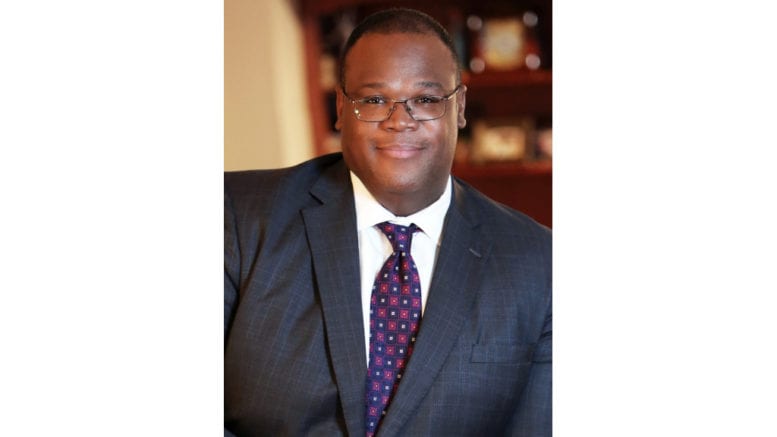 Jonathan Hunt is a Democratic Candidate for the Cobb County Board of Commissioners District 4 seat. The position is being vacated by incumbent Commissioner Lisa Cupid, who is running for BOC chair.

The primary election is schedule for June 9.

The Courier recently had a phone conversation with Hunt about his candidacy, and started by asking him to tell a little about his background.

“I’m the son of a preacher and a teacher. I’m a husband and father,” Hunt said.

“We live in Mableton now, but prior to that we lived in Smyrna,” he said. “We moved to Georgia about 15, almost 16 years ago.”

“We’ve always lived in Cobb, and we love Cobb quite a bit,” he said.

“Professionally, I’m an attorney. I’ve been practicing for over 19 years,” said Hunt.

Hunt said one of the firms he worked for was Denton’s, the world’s largest law firm.

A friend of Hunt’s with the City of Atlanta asked him to do some public sector work.

“I didn’t know that I wanted to be in public service initially. But once I took the job, I just fell in love,” he said. “I fell in love with it and worked on many projects: the Atlanta airport, Mercedes Benz Stadium, Atlanta street cars, the civic center, just large infrastructure and economic development projects that really got my blood going.”

“Then I joined MARTA, where currently I’m the Senior Director of Corporate Law,” he said.

The Courier asked Hunt why he decided to run for the open Board of Commissioners seat.

“But I wanted to focus on my community, the folks that I hang out with every day, and touch Cobb in a more direct way,” he said.

What issues would Hunt prioritize?

The Courier asked Hunt what issues he would focus on if elected to the BOC.

“A lot of time, initially, for the new Commissioner will be taken up with COVID-19. potentially preparing the county and community for a second wave next winter,” he said. “As well as getting us economically vibrant again.”

He said beyond the effects of COVID-19. his priority would be improving the quality of life in South Cobb.

“We have a dearth of parks compared to other areas of the county,” he said. “And there’s some innovative ways we can address those issues at minimal cost impacts. For example, we can widen our stream buffers and program those to be natural trails, similar to Heritage Park, which is wildly popular, and just reopened.”

“Another big issue is equitable development. That would be one of my main charges, ensuring that long range infrastructure investment is made,” Hunt said.

“Not only in District 4, but county wide, we’re going to welcome anywhere from 150 to 250,000 new residents in the next 15 or so years, and we need to make sure that infrastructure is prepared.”

He said infrastructure for water, sewer, roads and for addressing public transportation needs will need to be more robust.

“Housing affordability is another big issue,” he said. “It’s not just an Atlanta problem. It’s a regional issue.”

“I’ve had the pleasure of going around and seeing some of these encampments that are tucked away in wooded areas and undeveloped lots throughout the county,” he said. “You’d be surprised to see who’s living in cars, or pulling over into a closed retail development at night to just sleep.”

“These are what folks sometimes refer to as the working poor,” he said.

“Housing instability and housing insecurity is one of the most disruptive things in our society and in our county, and we need to be addressing it. I think we can address it in a smart, reasonable way,” he said. “That doesn’t mean just handing out money.”

“A dear friend of moved down here from Ohio,” Hunt said. “She’s a senior, and she didn’t want to live in a senior facility, did not want to buy another single family house, and wants to live in a mixed age development.”

“We’ve done bonds and other incentives for developers. We just need to hold their feet to the fire and ensure that there are workforce housing units and senior affordable units within those market rate developments. It’s a win-win for everybody,” he said. “And you don’t have massive concentrations of poverty and other things that we’ve seen are not good for communities.”

Land use and zoning issues occupy a lot of the time and attention of the Cobb County Board of Commissioners.

The Courier asked Hunt how he would approach zoning issues.

“I’ve done quite a bit of development in all of my roles throughout the region,” he said. “So I’ve had the pleasure of seeing how many different counties, cities and communities deal with zoning issues today as well as issues coming down in the five to 15 year horizon.”

“The ones that have always worked the best are the ones where your elected leaders, your government your staff, and your community come together.”

He said an example is when a charrette is done to get deep community input, with the purpose of creating an overlay district.

“You put all these plans in place, and then it’s incumbent upon everybody to stick to them as closely as possible,” he said.

“My particular philosophy regarding development is that Cobb County is going to get more dense.” he said. “But what we don’t need is density where it doesn’t belong.”

“You need to identify your major corridors, for example, Cobb Parkway. There’s more density there. There are more apartments there. It’s primed to be a transit corridor.”

He said there are similar areas across the county, including the Battery, and in District 4: Veterans Memorial and the parts of Mableton Parkway across from Charlie Brown airport and the Hamilton Holmes MARTA station.

“Those are corridor that should be incentivized for development and density,” he said. “While areas like historic Mableton and historic downtown Powder Springs may not be appropriate for intense heavy density uses.”

Hunt was asked his position on the reopening of the controversial Sterigenics facility near Atlanta Road on the outskirts of Smyrna.

During a period of voluntary shutdown for the testing of new equipment intended to address the emissions safety concerns, the county ordered Sterigenics to stay closed for review of its certificate of occupancy and fire protection standards.

Pressure from the FDA caused the county to allow the facility to reopen on a limited basis, and a federal court expanded that to give Sterigenics the full ability to operate their plant pending a final legal decision.

“Well I’m not happy that Sterigenics reopened,” Hunt said. “It’s physically located in District 2. But if you look at their area of impact … it impacts District 4, and it impacts our neighbors to the south and east in Fulton County. It’s a large area.”

“I’m very concerned about the potential for health risks and health harms.” he said.

The Courier asked Hunt his thoughts on crime and public safety.

“The first priority of commissioners is providing for the health, the safety, and welfare of the citizens of Cobb,” Hunt said.

Hunt said he supports the step and grade pay plan adopted by the BOC in February in an attempt to retain law enforcement officers who were leaving Cobb for surrounding departments.

He said he has spoken with commanders of three precincts that touch District 4, and that a concern of his is that police, fire and emergency services are not fully staffed.

He said that with more hiring, it will be possible to implement more community outreach programs.

“With a growing Hispanic, Latino community, building that trust is paramount. absolutely paramount, as well as our existing community members,” he said.

The Courier asked Hunt if he had thoughts on the situation at the Cobb County Adult Detention Center, where a series of deaths, and complaints of substandard conditions by inmates and their families has put the facility frequently in the news.

“The jail is the sheriff’s house.,” Hunt said. “And the sheriff does not, as you know, report to the county commissioners except with respect to one item, which is his or her budget.”

“And that is the inflection point where the commissioners can request and demand improvements,” he said.

“It is a detention center. It’s not a prison. It’s not a jail,” Hunt said. “It affects everybody in the county.”

“So if your son or daughter is speeding above a certain level, they could be arrested and they will be taken to the detention center,” he said. “So to say that just because you and I have not had a direct impact with this detention center. It doesn’t mean tomorrow that you couldn’t.”

The Courier asked Hunt if there were any other issues he’d like to speak on, and if he had a pitch to voters he’d like to deliver in closing.

“I would say that South Cobb is rising,” he said.

“I think the need for two Tax Allocation Districts (TADs) to help support commercial development in South Cobb, are paramount,” he said.

He said there are two TADs just north of District 4 in Marietta, and that they were so successful that the bonds are going to be paid off early.

“We have in District 4 in Cobb County, the single largest entertainment destination in the state, which is Six Flags. We need to be doing more to help the growth of that area,” he said. “What is good for South Cobb is great for Cobb County.”

“I’m the son of a preacher and teacher. I’m a husband and father. I have 19 years of complex legal experience and 10 years of public service experience, working with and fighting some of the largest companies, cities and counties in this state,” he said. “I’ve experienced working with various levels of state government.”

“I believe that I have the experience and track record necessary to help chart South Cobb and Cobb’s future now,” he said.

“We are at an inflection point between the pandemic and growth, and you need a commissioner that is going to go forward, boldly, transparently. and with a high level of accountability.”

“There will be a lot of very complex issues that will be raised over the next 10 years that will set either set this county up for tremendous growth or could have us lagging behind other areas of the region,” he said.

“I believe Cobb is the best county in the state of Georgia.”