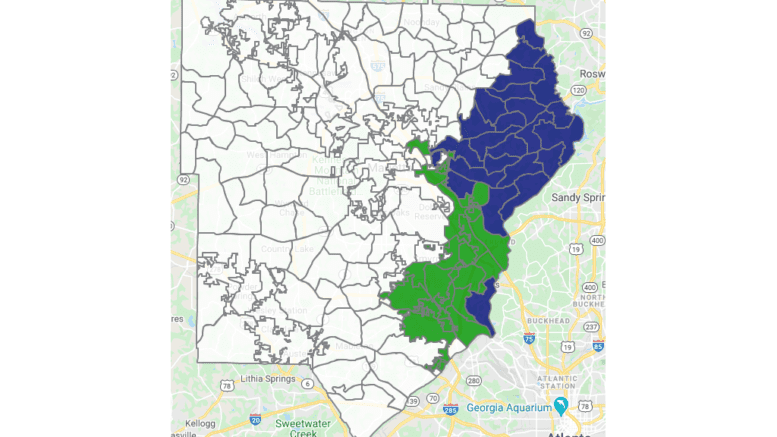 Screenshot of District 2 from the Cobb County election results page

Democrat Jerica Richardson defeated Republican Fitz Johnson in the race to fill the seat of District 2 Commissioner Bob Ott on the Cobb County Board of Commissioners, and we’re going to examine from where in the district each candidate drew their strength.

This is the third in a series of articles taking a closer look at the dramatic results of the November 3 2020 election in Cobb County.

District 2 has been, until this election, a reliably Republican seat.

Along with District 4 Commissioner Lisa Cupid‘s defeat of incumbent Republican Chairman Mike Boyce, this election yielded the first majority Democratic Cobb BOC since the GOP gained control of the body in 1984 under Chairman Earl Smith.

A good place to begin a closer look at the precinct level is this screenshot of the map showing the distribution of precincts Johnson won (in dark blue) and those Richardson won (in green).

As you can see, Richardson’s strength was in the southern part of the district including Smyrna, the two Marietta precincts in District 2, and all of Vinings except for Vinings 04.

Johnson’s strength was in East Cobb and Vinings 04.

Vinings 04 is one of a handful of precincts that delivered its votes to Joe Biden in the presidential race, but went with Republicans in local races.

In the tables below I’ve linked to the map of each precinct, so by clicking on the name, you can get an idea of its boundaries and its placement on the larger map.

If you drill down into the precinct maps linked to below, you’ll find that Johnson did well in precincts running along Roswell Road, Sewell Mill Road, Post Tritt Road, Johnson Ferry Road … in fact along all the major corridors associated with East Cobb.

The following precincts were won by Fitz Johnson:

In the next installment in this series we’ll take a look at the race for Cobb County Sheriff, in which longtime incumbent Neil Warren was unseated by Democratic challenger Craig Owens.