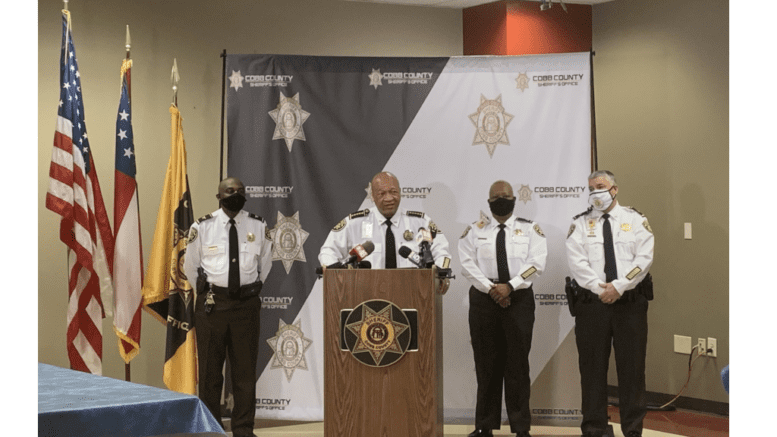 Owens held a press conference at the sheriff’s office last week, where he announced his “100-day plan of action.”

The sheriff said there were numerous departmental problems. Some of these problems have sparked widespread criticism and protests of the Cobb sheriff’s office by community activists in recent years.

Owens said he not only wants to transform the culture of the department but reform “the whole mindset” of it as well.

“I swore on my deputy’s hand that the Cobb County Sheriff’s Office will never, ever again play second fiddle to anybody,” Owens said. “ … We’ll be out front, we’ll be seen and we will be respected because we are going to be nothing but professional at all times.”

Below are Owens’ plans to revamp the sheriff’s office and county jail in his first hundred days.

Owens said he plans to put all possible precautions in place to stop the spread of COVID-19 in the sheriff’s facilities.

The department will begin adhering to the Centers for Disease Control and Prevention guidelines for jails, Owens announced.

The department will provide extra personal protective equipment to incarcerated people and deputies.

The new administration has also installed sanitizing stations in high traffic areas of the detention center, with more on the way.

Detention center staff have already started separating incarcerated people who show signs of COVID-19 from the rest of the jail population.

The jail holds detainees who test positive for the disease in a second segregated area, Atkins said.

The sheriff’s office will also begin tracking and publicly sharing how many employees and detainees have COVID-19 each week.

Command staff Maj. Larry White has been assigned to collect the number of cases in the sheriff’s facilities. White will connect with the Cobb County Emergency Management Agency, where the latter will publicly release the information White gives them.

For comparison, Cobb’s jail has approximately 1,400 people incarcerated there.

The Cobb sheriff’s office has also paired with Cobb and Douglas Public Health to supply rapid COVID-19 tests to people arrested, detainees and employees as needed.

The jail’s health providers will perform rapid COVID-19 tests after they are trained.

Owens anticipates installing automatic temperature-taking equipment in all sheriff-run facilities as another way to prevent the spread of the disease.

The sheriff’s office also released a survey to employees asking who wants to take the vaccine.

About half of the department’s employees expressed interest and will have to sign up to take it, as the COVID-19 vaccine is not currently mandatory, Owens said.

Owens himself is also aiming to take the COVID-19 vaccine within the coming weeks to set an example for his employees and the county, he said.

Owens tested positive for coronavirus at the beginning of December while at a sheriff’s training program.

Owens has since recovered but was told by his doctor to wait 30 days before getting vaccinated to ensure no issues would occur.

It is not yet clear if or when detainees would get vaccines.

Culture shift at work and the jail

“We’ve got to have a great working culture,” Owens said. “We’re not going to be what we were.”

Owens vows to restyle the department so that transparency is key inside and out of the sheriff’s office.

The department aims to carry out multi-rank reviews of employees who are disciplined for whatever reason.

The review board investigates the disciplinary matter, decides on a solution and recommends their solution to the sheriff and Anderson.

The department is launching a committee that reviews the use of force among officers. Owens said the goal of the committee is to make sure the department adheres to internal policies.

The sheriff’s office will reintroduce the rank of captain and the chaplain program.

Owens believes it appropriate that the community can see employee’s ranks, as it will add another layer of transparency to the department. He also wants the sheriff’s office uniform to stand out among various law enforcement departments.

He has an auditor coming to assess the sheriff’s facilities. Owens wants a cost estimate of the department so he can decide what to do from there.

Owens is mandating that the Cobb sheriff’s department no longer investigate deaths that occur in its jail.

Owens said he will ask the Georgia Bureau of Investigation to investigate any deaths in the detention center.

Around 50 people have died in the jail throughout the nearly two decades Warren was sheriff. Two women’s deaths happened just last year.

At the press conference, Owens said he is searching for ways to provide life skills for people incarcerated at the detention center.

The department will explore providing education and parenting skills to detainees. The sheriff said he wants to reduce the recidivism rate of the jail.

Connecting with the Cobb community

Owens has initiated a community engagement program to immerse the sheriff’s department within Cobb County.

“[The program] used to be called ‘community outreach,’ Owens said. “I don’t like ‘outreach,’ I like ‘engagement’ because we want to engage our community. I want to go out and talk to them, mingle with them and just be with them versus just reaching out.”

The department will host quarterly briefings where community members can communicate with the office.

Owens said he wants to hear from Cobb citizens on what the sheriff’s office is doing right and what it needs to fix.

Owens has hired a Spanish-speaking community liaison. The liaison will be announced this week.

Owens has stressed the need for the sheriff’s office to restore trust between themselves and Cobb’s Latino community.

The program is a contract with U.S. Immigration and Customs Enforcement authorizing sheriff’s deputies to question anyone arrested and detained about their immigration status.

Latino activists and community members criticize the program for racially and ethnically profiling Latinos and other people of color in Cobb County.

Hundreds of people in Cobb have been turned over to ICE with the program.

Owens ran part of his campaign on ending Cobb’s 287(g) contract with ICE.

At Thursday’s press conference, Owens announced he met with ICE that same week and the meeting went well.

Owens said an official statement about his plans for the 287(g) program will come out this week.

Gaynor said the sheriff’s department aims to be a bigger part of the county schools.

The department will donate school supplies and masks to elementary schoolers.

The office is trying to bring the BRAKES Teen Pro-Active Driving School to the county. The department wants to assist in teaching teenagers how to drive safely.

The office is also trying to build relationships with the Cobb Chamber of Commerce, the county’s business associations, rotaries and the churches.

Anderson emphasized that any organizations or businesses are free to reach out to the sheriff’s office.

The department has 800 apartment and residential evictions pending.

The community engagement team’s task is to reach out to people before the sheriff’s office evicts them. Task members will try and find hotel accommodations or some place to go for people evicted.

Owens ran and won on this statement. He also made history when he became Cobb’s first Black sheriff.

Owens said that transparency is crucial to him. He said he wants the community to always know what the sheriff’s office is doing.

“The prior culture from what I’ve seen, what I’ve known, has been very guarded,” Owens said. “You know, you can’t come into the facility, we’re not telling you anything and everything’s a secret … I want everybody to know what we’re doing. We have nothing to hide here, we’re on the up and up with everything we do.”