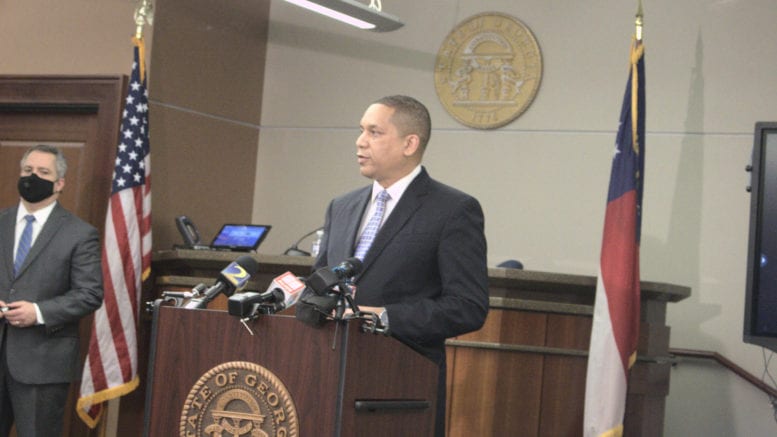 The key points from this article

Cobb County District Attorney Flynn Broad announced in a press conference Thursday that a grand jury had recommended that no action be taken against a police officer who shot Vincent Truitt, who died of the gunshot wound.

What the grand jury decided

The findings from the grand jury, distributed to the press stated:

On February 18, 2021, the District Attorney presented evidence to the Cobb County Grand Jury regarding the use of force involving the Cobb County Police Department Officer Max H. Karneol which occurred on July 13. 2020, in Cobb County, Georgia. After reviewing the evidence presented, which included the testimony of Georgia Bureau of Investigation Agent Taylor, body worn camera footage and dash mounted camera footage, the 2021 JANUARY FEBRUARY Term Grand Jury, by majority vote, has determined the use of force by the officer involved was authorized pursuant to O.C.G.A. 16-3-20, and 17-4-20.

Based upon the findings and determination by the Grand Jury, it is the recommendation that the District Attorney take no further action regarding this matter.

What Georgia laws the grand jury considered when making the decision

One of the Georgia codes the grand jury considered in making the decision, O.C.G.A 16-3-20, defines when conduct (in this case deadly force) is justified.

The code reads as follows:

The fact that a person’s conduct is justified is a defense to prosecution for any crime based on that conduct. The defense of justification can be claimed:

(2) When the person’s conduct is in reasonable fulfillment of his duties as a government officer or employee;

(3) When the person’s conduct is the reasonable discipline of a minor by his parent or a person in loco parentis;

(4) When the person’s conduct is reasonable and is performed in the course of making a lawful arrest;

(5) When the person’s conduct is justified for any other reason under the laws of this state; or

(6) In all other instances which stand upon the same footing of reason and justice as those enumerated in this article.

The second section of Georgia code the grand jury considered for the case, 17-4-20, includes descriptions of when officers can use deadly force:

(b) Sheriffs and peace officers who are appointed or employed in conformity with Chapter 8 of Title 35 may use deadly force to apprehend a suspected felon only when the officer reasonably believes that the suspect possesses a deadly weapon or any object, device, or instrument which, when used offensively against a person, is likely to or actually does result in serious bodily injury; when the officer reasonably believes that the suspect poses an immediate threat of physical violence to the officer or others; or when there is probable cause to believe that the suspect has committed a crime involving the infliction or threatened infliction of serious physical harm. Nothing in this Code section shall be construed so as to restrict such sheriffs or peace officers from the use of such reasonable nondeadly force as may be necessary to apprehend and arrest a suspected felon or misdemeanant.

(c) Nothing in this Code section shall be construed so as to restrict the use of deadly force by employees of state and county correctional institutions, jails, and other places of lawful confinement or by peace officers of any agency in the State of Georgia when reasonably necessary to prevent escapes or apprehend escapees from such institutions.

The video and ADA Jason Saliba’s description of the events

After Broady announced the recommendation of the grand jury, Deputy Chief Assistant District Attorney Jason Saliba showed the press excerpts from the dash and body cam videos, and described the events leading up to the shooting of Truitt.

Saliba said the Cobb County Police Department received a tag reader hit on a silver Nissan Altima that had been reported stolen.

Police attempted to stop the vehicle at a Kwik Trip, but a short chase ensued, he said.

The chase ended at a warehouse on Riverside Parkway, where the vehicle stopped, and according to Saliba, Truitt exited the front passenger door holding a weapon, and was shot.

“It should be noted, although we have not shown it out of respect for Mr. Truitt and his family, that the officers almost immediately transition to rendering lifesaving aid, chest seals, CPR and other medical techniques,” Saliba said. “He was transported to Grady Hospital, entered surgery that night, he was transferred to the ICU later that evening, and died approximately noon the next day.”

Saliba showed two stills that he said showed the weapon Truitt had been holding.

Broady said, “Yes, the officer saw the gun. There’s a portion of the video that we did not play with respect to the family where the young man asks the officer ‘Why did you shoot me?’ The officer responded ‘Because you have a weapon.'”

A reporter asked Saliba whether Truitt was ordered to drop his gun or stop.

“Each of our police agencies has a SOP (Standard Operating Procedure) for their use of force. And just following the law of (Georgia code) 17-4-20, it says that if an officer is chasing a fellow who has a weapon, who can pose a danger to the others, he has the ability to fire to use deadly force. And in this case, he also followed his SOP to the letter,” said Saliba.

Broady was asked whether as District Attorney he was required to follow the recommendation of the grand jury.

“As an African American hate to see any African Americans shot down,” he said. “But the fact is, we have to follow the law. And the law says the officer was within his rights.”

He said that the video showed that Truitt would have had opportunity to ambush officers involved in the chase.

Broady said, “I think my message to the community is that we cannot let emotions dictate how we see things, that we have to look at the facts.”

“And I’ll give you a quote from a book by Malcolm X. Malcolm X says ‘I am for justice, no matter who it’s for or who it’s against.'”

“And my job as a district attorney is to make sure that I looked out for everybody,” said Broady. “Not just the victims, but also the offenders to make sure that they get a fair hearing based on the evidence, and that’s what we did today.”

The reaction of Truitt’s family and their attorneys

Before the press conference ended, Broady was asked if he’d had any contact with the family since the recommendation by the grand jury.

After the DA’s press conference, Broady’s family and their attorneys gathered in the lobby of the courthouse in an area that had been set up for them to talk to the press.

Gerald Griggs, one of the attorneys for the family, said, “From its very inception, there’s always a question of transparency and accountability in this case, meaning the release of the video.”

The Truitt family and their attorneys had been demanding that the police release the video to the public since Truitt’s death.

Griggs said that the video showed that at no point did Truitt pose a threat to the officers.

Deborah Howard, Vincent Truitt’s grandmother, came to the microphone. Speaking of Broady, she said, “He has talked down to the family,” and said that when a member of the family expressed grief, he walked out of the room.

“Cobb County, you should be ashamed. We’re tired of it, and we’re not going away,” she said.

Maria Banjo, another attorney for the family, recently spoke about Truitt’s death before a Commission of Inquiry that will report to the United Nations’ Office of the High Commissioner for Human Rights about the death of Black people in the U.S. at the hands of law enforcement officers.

She took the microphone Thursday evening and said, “I’m very concerned about the mistreatment of this family.”

“As you all know, as of January 1 of 2019, Marcy’s Law was passed. The Victim of Crime’s Rights was passed. And unfortunately, (Broady) does not want to abide by that.”

She said the family was not notified that the grand jury was taking up the case until an hour before they started deliberations, which gave them an hour to get ready and travel the 20 miles to get to the Cobb courthouse.

Another attorney for the family, Jackie Patterson, said that the case should have been presented to a criminal grand jury, but instead was presented as a civil case.

“If you look at the document that the DA presented to you all, it says ‘we hearby rule that no further action should be taken’. That is not what you call ‘not being indicted’. That is a civil process,” Patterson said.

He said the case was “a sham,” and that Broady should resign. “You don’t trick a family into thinking you took a case to a criminal grand jury, when you took it to a civil grand jury.”

Griggs said that the family was treated with more respect by former District Attorney Joyette Holmes, and by GBI Director Vic Reynolds, than by current DA Flynn Broady.

Regarding the gun, Griggs said, “I have not seen any still shots, and I’ve watch the entirety of (the video) twice.”

“We had a conversation with the GBI director. In reference to that he said that you had to slow down or video freeze frame or to even remotely see the gun,” Griggs said.

Former DA Holmes told Griggs that she did not see the gun in the video, Griggs said.

“So again, if you present the evidence correctly, you will see that at no point was Vincent Demario Truitt a threat to anyone,” said Griggs.