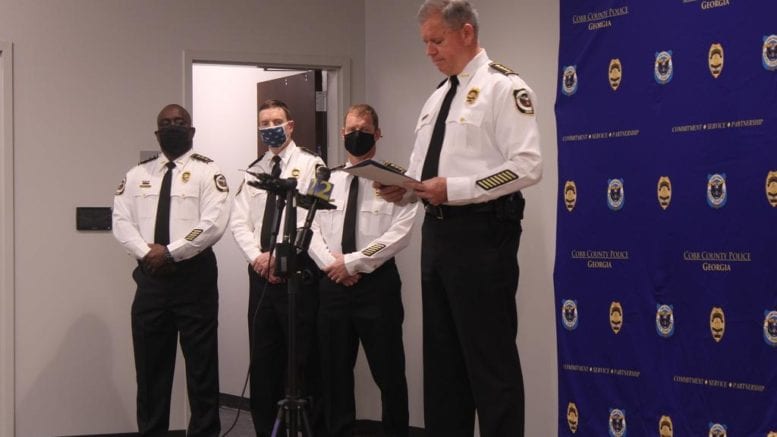 Cobb Police Chief Tim Cox updates the press after a county grand jury does not charge one of their officers with killing Vincent Truitt. (Photo by Arielle Robinson)

Cobb police Chief Tim Cox updated the press Thursday evening on the aftermath of the killing of Vincent Truitt by a Cobb police officer.

Truitt, a Black teenager, was shot in the back twice while running away by a Cobb police officer last July.

Throughout the case, Truitt’s family has demanded the body camera footage of the police officer killing Truitt be released to the public.

Thursday evening, Cox gave a short press statement and then showed parts of the now public video of Truitt’s killing to the room.

Watch the video shown at the press conference embedded below. The body and dash cam footage begins at 6:55 on the video.

Below is Cox’s recounting of events on the night a Cobb officer killed Truitt and an update he provided in light of the grand jury decision:

On the night of July 13, 2020, Cobb County police officers were notified of a stolen vehicle in the area of Riverside Parkway. They located the vehicle and attempted a traffic stop as the vehicle entered the QuikTrip parking lot on Riverside.

The driver of the vehicle refused to stop and chose to drive away to avoid the officers. This resulted in a vehicle pursuit on Riverside Parkway and ultimately the driver entered a business complex and drove to the rear of that complex.

At that point, the officers were able to force the vehicle to stop. The driver of that vehicle exited the car and ran from officers. He was ultimately apprehended.

The rear seat passenger remained in the car. He was detained on the scene.

Mr. Truitt was armed with a handgun as he exited the vehicle. Mr. Truitt attempted to run when the officer … drew his … weapon and fired two shots, striking Mr. Truitt both times. Mr. Truitt fell to the ground and was secured by officers.

They then began to provide medical assistance. This assistance consisted of the use of applying chest seals that they carry with them to assist them if they should ever get shot.

They also began to perform CPR and continued with those life-saving efforts until the Cobb County Fire Department and EMS arrived on the scene. At that time, Cobb Fire and EMS began providing medical assistance and eventually Mr. Truitt was transported to Grady Hospital. He passed away approximately 12 hours after the shooting incident.

As with all of our officer-involved shootings within our department, this investigation was immediately turned over to the Georgia Bureau of Investigation and they responded to the scene that evening. Our department assisted the GBI in identifying — providing the identity of Mr. Truitt.

And over the next few days, the Cobb County Police Department provided a liaison, which was one of our command staff members, to reach out and communicate with the family and provide a point of contact to the family. Over the next few weeks, Mr. Truitt’s mother and grandmother communicated with that liaison [multiple times].

Upon the GBI completion of the investigation, they presented their full report to the Cobb County District Attorney’s Office.

The District Attorney’s Office presented the case to the Cobb County grand jury today. And the grand jury has determined that the officer’s use of force was authorized and recommended the District Attorney take no further action in this manner. There are multiple videos of this incident and these videos show how fast this entire incident unfolded. Especially when the driver of the vehicle, Mr. Truitt exited the vehicle.

I recognize that the loss of life is tragic. I cannot imagine the pain that the Truitt family has endured during this time. I pray for that family every day. I also recognize the stress that any officer goes through when they have to use any use of force or put in any situation that they have to use force. And I pray for that officer and his family.

Both families will struggle with the emotions and feelings related to this event for many years to come. The department recognizes the need and desire of our community for a thorough, independent investigation in matters such as this.

I appreciate the community’s patience, as we’ve gone through this process for the last many months. And I appreciate the thoroughness, professionalism and transparency that has been provided by the GBI, the Cobb County District Attorney’s Office and members of the grand jury.”

The video Cobb PD showed said that the officer who killed Truitt was temporarily put on administrative leave while an internal investigation occurred.

The officer has since resumed and is currently working “full duty,” according to Cobb PD’s video.

Gerald Griggs, one of the attorney’s for Vincent Truitt’s family announced outside a press conference held by District Attorney Flynn Broady that the family intends to move forward with a $50 million lawsuit against the county.

The same evening Cox made his statement District Attorney Flynn Broady held a press conference, and Vincent Truitt’s attorneys and his grandmother, Deborah Howard spoke to the press afterward. Watch the Courier for our report on this, and on other developments as they unfold.