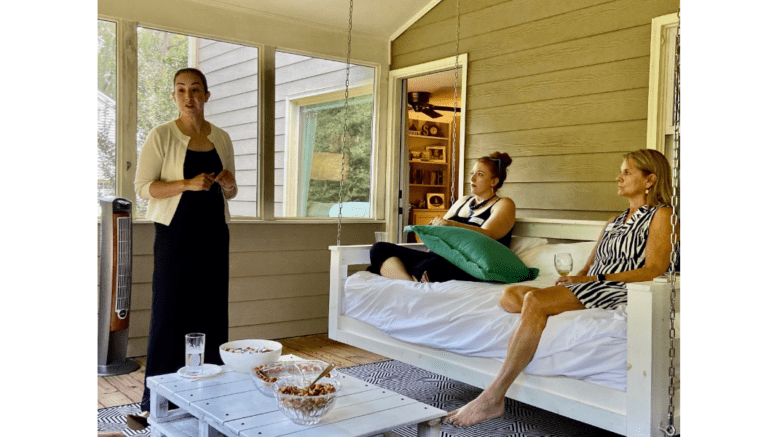 Candidate Catherine Pozniak spoke with a group of Cobb parents at a Sunday meet and greet.

The race for Cobb County school board is intensifying with early voting set to commence in less than a month.

Three seats are up, but it’s the Post 4 swing race between Republican Chairman David Chastain and Democrat Catherine Pozniak drawing the most attention and money because of its potential to change the dynamics of a contentious board.

In 2020, the board approved a rule change requiring four members, rather than three, to place an item on the agenda for discussion. This has effectively prevented the three Democrats from bringing their concerns to the table, unless at least one Republican member agrees.

The redistricted Post 4 includes the Kell, Sprayberry and Lassiter clusters, though district lines do not always correspond to attendance zones.

Voters can check who their board member is here.

Chastain, a graduate of Wheeler High School, has touted that he is the “only candidate with real and deep roots” in the county. He has served two terms on the board since 2015. His campaign recently highlighted the extensive updates in progress for Sprayberry High School begun under his tenure.

A recent campaign email for Chastain included a side-by-side comparison of his work history with Pozniak’s. The call for a “stable and steady hand in leadership” compared his 25-year tenure at Lockheed Martin and eight years on the board to Pozniak’s lengthier resume.

It’s true that Pozniak has held more positions over the last two decades: a director at Teach for America, director of the Louisiana State Board of Elementary and Secondary Education, co-founder of New Schools for Baton Rouge, and assistant state superintendent of fiscal operations for the Louisiana Department of Education.

Pozniak, a captain in the United States Army Reserve, also recently returned from six weeks of active duty. She advises on education matters as a specialist for Civil Affairs and Psychological Operations Command.

In a tweet, she pointed out that the email from Chastain left off her classroom experience: four years teaching on the Rosebud Reservation in South Dakota.

The tactic to paint Pozniak as an outsider who has changed jobs too many times has raised some eyebrows. She attended Cobb County Schools starting from elementary school until she graduated from Sprayberry High School in 1997. She returned to her Cobb childhood home in 2020 when her father died.

“FTR [for the record], I have the same address I had when I was nine years old,” she tweeted last month.

Nonetheless, some in Chastain’s camp see his time in Cobb, putting his children, and now grandchildren, through the schools as the “boots on the ground” experience they want.

“He sees 1st hand how the day to day works in Cobb schools,” Scott Donahue wrote in one of many recent lively Facebook debates over the race. “It’s easy to say you have an education, but is that better than having 6-7 kids all attend Cobb schools and seeing 1st hand how things are done?”

Despite the fact that Pozniak surpassed Chastain in fundraising as of the most recent contribution disclosure deadline, she told attendees at a meet and greet Sunday that it’s still an uphill climb against an incumbent.

Pozniak focused much of her time this weekend talking about literacy and her concern that the district hasn’t moved away from heavily-criticized balanced literacy programs, like Fountas & Pinnell and Lucy Calkins, to a more science-based phonics approach to teaching reading.

She’s extremely concerned about the effects of the pandemic on reading, especially for those students who missed the crucial period between kindergarten and third grade.

“In this moment it is really critical,” she said. “We have to hit reset.”

Some of Pozniak’s campaign volunteers can’t even vote for her. They live in Cobb, just not in Post 4. At Sunday’s meet and greet, everyone attending lived either in Charisse Davis’ Post 6 or David Banks’ Post 5, including co-hosts Russell and Ellen Sauve. Their daughter attends a Cobb middle school.

“We need new leadership in Cobb Schools that actually listens to the parents and community instead of misdirection and lip service,” Russell said. “We need leadership that works with and for everyone in our schools. Dr. Pozniak is that person. From the beginning of her campaign Dr. Pozniak has been reachable and intently listened to our concerns. She is a certified teacher and previously managed state agency budgets of $5.5 billion. Dr. Pozniak’s repeated messages around reporting, accountability, and transparency are sorely needed at the leadership and board level of Cobb Schools.”

The recent redistricting is of particular concern in this election. Volunteer canvassers are focusing on areas that may not even know they have been redrawn into Post 4. Some of the confusion results from people being zoned to attend certain schools, while their assigned board member is assigned to a different set of schools.

When asked why they were attending an event for a candidate who won’t appear on their ballot, the parents listed their top motivations as frustration with Banks’ ongoing behavior on social media and emails, and the failure of the board to address it, feeling ignored on safety issues, such as the recent vote to add non-police armed personnel, and wanting more transparency on the way the district spends taxpayer dollars.

Ellen Sauve said she would like to see Chastain take Pozniak up on her offer to do a candidate forum together. Years of volunteering in her daughter’s schools has left her frustrated by the feeling that they are constantly fundraising for basics that should be provided by the district.

“I believe anyone who is given the opportunity to hear Dr. Pozniak’s platform would wholeheartedly support her as well,” she said. “After seeing her speak yesterday – passionately about children and their education, I suspect he recognizes he would be outmatched on every front and has therefore opted to avoid the discussion.”

Pozniak’s speech remained focused on the intersection of fiscal responsibility and making sure the district makes use of its dollars on the right things.

“The language has gotten really political, but everyone wants their kids to be able to read, write and do math,” Pozniak said.

The perennial debate over the senior school tax property exemption has also come up. Both candidates said they support the exemption as it currently exists. Chastain has made it a major tenet of his campaign, while Pozniak shared that her father was able to retire upon paying off his house, thanks to Cobb’s exemption.

Since any changes must go through the state legislature, Pozniak said she thinks it receives an inordinate amount of attention during election cycles.

In a Facebook post she wrote, “It makes no sense to demand more money from one of our most financially vulnerable populations when the Board Majority, led by my opponent, continues to authorize reckless purchases funded with public dollars.”

In a comment on his Facebook page, Chastain disagreed on how much effect the school board can have on the senior exemption, pointing to a 2017 change in Forsyth County’s exemption he said was stoked by a non-binding resolution from the board

Republican-sponsored House Bill 1102 successfully passed the Georgia House and Senate. A referendum was placed on the 2016 ballot and approved by Forsyth County voters. The intention was to close the loophole that was essentially allowing people to move a grandparent or other senior into the home and claim the exemption.

Now, in order to be eligible, any minor children living in the house must be “natural or adopted children of the person, are foster children under the care of the person, are children for whom the person has been appointed guardian, or are temporary residents of the homestead for a period of not more than one year in duration.”

Also on the Nov. 8 ballot

Nichelle Davis is the unopposed presumptive winner for redistricted Post 6. She will replace Charisse Davis, who did not run for reelection. The post includes Campbell and Cobb Horizon High Schools.

Current campaign contributions as of the most recent reporting deadline:

The Courier reached out to all the candidates for any updates or upcoming public campaign events:

All Cobb County schools online for week of January 18