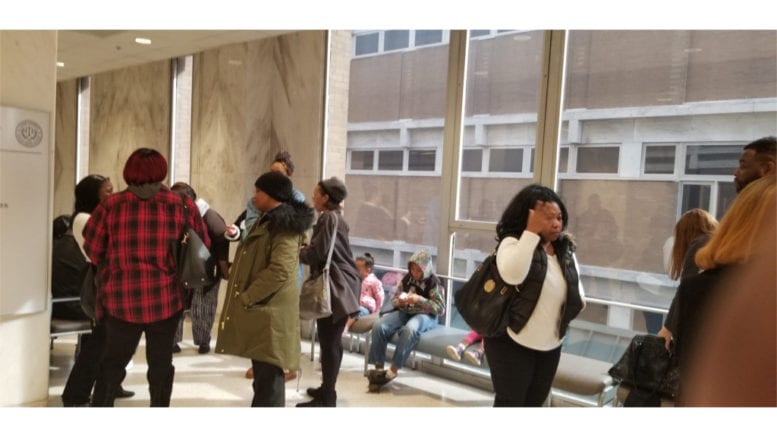 The owners of three Riverside Parkway apartment complexes in South Cobb, who face over 80 charges of code violations requested and were granted a jury trial in state court. The violations were to be heard in magistrate court last Thursday.  The move of the violations into state court, and the resulting further delay, frustrated and angered a group of tenants who showed up for the proceedings.

After Judge Gerald Moore announced that the violations would not be heard in magistrate court, the residents were led into the hallway outside the courtroom by Cobb County Assistant Solicitor General Joe Hudson.

“I can’t imagine how frustrated you must feel,” he said to the residents, “However, they have now demanded a jury trial. What that means is this gets transferred to state court, and basically the legal process starts all over with arraignment.  I’m so sorry about that, but there’s nothing I can do about it.”

Owners Kerrison Chin and Peter Mazzuchin and their attorney Carter Clayton watched from the other side of the room for awhile before leaving. Linda Barichello, a Canadian investor in the complexes who accompanied them to court, stayed behind to talk to people in the hallway.

Stephanie Burris, a resident of Parkview, said to Hudson, “It’s like nobody cares about us. It’s like nobody’s trying to help us. We have kids.  There are rats coming out of the walls.  Do you understand me?  We have to sleep in our beds with towels under the doors so nothing comes in. Like, this is not fair to us..  I understand what you’re saying, but at the same time, what about us?  Where does our help come from?  Who helps us? Who’s going to look out for us?  We still have to go back to the same apartment with those mice.”

“They have the money, they don’t have to live like we do. It’s ridiculous and it’s not fair.  You guys are basically telling us to just wait. I understand that this is your job and this is what you guys are supposed to do, but at the same time you need to understand that we’re frustrated,” she said to Hudson.

Hudson said he was frustrated, too, but that due process takes time.

Deandra Wilkerson, the property manager at Parkview approached a group of residents, and the exchange became heated.  She said that the requirements involving the outside of the apartments listed in the citations had been fulfilled.

She told the residents, “I’ve only been here a month.”

One of the residents said that fire extinguishers have not been installed in the apartments.

Wilkerson said apartment management and staff were working on it, but had not completed all the buildings.  “We can only do so much at one time,” she said.

Laurionne Henderson is a resident of Kingsley Village who said she is happy with the progress the apartment managers have made recently.

“I’ve been living there for seven years, and I haven’t had any problems. Whatever problems that I do have I go to the office, and speak to them respectfully and firmly, and I tell them the problem, and it’s usually fixed.”

She said she did have issues with the previous property managers about four years ago, but for the past two years problems have been fixed when they were reported.

She told the Courier that Prince Carter, the recently hired property manager, was understanding of the problems tenants have, and had worked with her when she had difficulty with her rent payments.

Carter, who manages both Kingsley Village and Hunters Grove, and Monica Delancy, the founder and director of We Thrive in Riverside Renters Association, got into a lengthy discussion in the hallway. Carter had earlier complained that Delancy had been handing out materials at the complex without permission.

So I agreed to him I should have done that.  And we’re going to set up a meeting.  Both properties designated a resident they wanted me to talk with.  I’m going to come out, I’m going to provide pizza, and I just want to make sure it’s a partnership.  So I’m very glad that we got a chance to communicate that, but … the managers are caught in the middle.  These residents are wanting to talk with the owners, and the owners did not stay behind to talk.”

Reactions to the delay

Asked about the move of the case into state court, Delancy said, “Hey, if you have the resources to do what you need to do, to move it around, and the judicial process allows that, then by all means, you have to do that.  They do that because the judicial system allows them to do that.  But we’re going to still press on to make sure that they get these rats taken care of in their apartments, that they get the things fixed in their apartments because that issue of code violations is outside. We’re here for the children.  All of us have kids that live there. They need to know that we’re fighting for them. But the judicial system allows them to go to state court, then so be it.”

Ross Cavitt, the county’s communications director, said the the code enforcement department would continue to keep an eye on the complexes. “They may end up filing more citations and we may be going through this process all over again,” he said.

Jennifer Yankulova, an attorney for the Cobb County office of Atlanta Legal Aid, who was there to observe the proceedings, said, “It’s just so crazy.  Clearly these apartment complexes are not maintaining these apartments.  That is clear from those that are here today, (and) from the court citation proceedings.”

Peter Mazzuchin, one of the owners of the complexes, told the Courier outside the courthouse, “What I have to say today is that the mob mentality that persists, if you take a look at some of some of those people and their actions … these are the types of people that lie. This is not right. As for the conditions, we are addressing those.  And we are addressing those positively. However, if somebody lies, justice will be served. And the deferral will give an opportunity to really establish the truth in what was really going on, because there’s a lot of angst going on right now.”

He said, “We’re here to transform communities, that means people living nicely, obeying the rules and the protocol, and not taking advantage of each other. Some of the people are allegedly involved in nefarious activities, I said some, I didn’t say all.  However, (with) further exploration into this, justice will be served. Because anyone doing anything nefarious, should be held accountable.”

The three complexes, Kingsley Village, Hunters Grove, and Parkview Apartments, are owned by the same Canadian-based company. The current owners bought the property in 2015.

Residents of the complexes have complained of conditions inside the apartments, which are not addressed by the code violations.  The county’s code enforcement department only addresses exterior conditions.  Residents held a town hall in November, a press conference with the Southern Christian Leadership Conference and more recently have been speaking at Cobb County Board of Commissioners meetings. BOC Chairman Mike Boyce toured one of the complexes recently.

The complexes have been issued a set of over 80 code violations due to be heard in Cobb County magistrate court Thursday morning, March 7, but were delayed again when the apartment owners requested a jury trial through their attorney, Carter Clayton.

Peter Mazucchin, one of the owners, told the Courier in a series of phone conversations that the conditions at the apartment were due to mismanagement by a person formerly in charge of managing the properties.