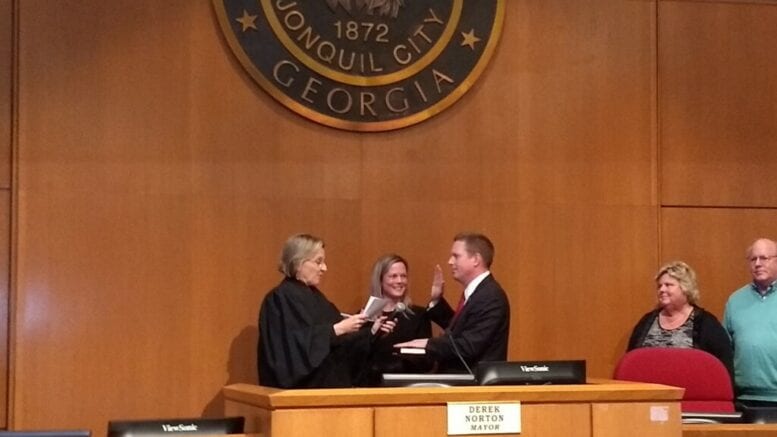 Seven city council members, Smyrna’s first new mayor in 35 years, the city administrator, attorney, clerk and a host of judges were all sworn in for new terms before a standing-room-only crowd Monday night.

The biggest story, however, may have been the exit of longtime Smyrna Mayor Max Bacon, who gave a short speech and managed not to cry before storming the exit doors and concluding a city council run which began with his first campaign in 1979.

Despite the lack of tears, Bacon was clearly emotional as he thanked many of the people he’s worked with and named each person who was on the city council during his first swearing-in ceremony in January 1980. Dating back even further, Bacon noted that his first involvement with the council came in 1974, when he was upset with the parks and recreation department because there was nowhere to play softball.

With his 12th and final term in office behind him, Bacon headed straight for the exit upon concluding his remarks, opening the door for new mayor Derek Norton to preside over his first meeting in charge.

Norton was joined by his wife and two children, who he briefly held in his arms before his swearing-in ceremony. He later donned a paper tie that he said his daughter made for him, which he’d promised he would wear during his first meeting as mayor.

Norton was sworn in for his four-year term by Cobb County Superior Court Judge Ann Harris. Also sworn in were new city council members Glenn Pickens (Ward 1), Austin Wagner (Ward 2) and Travis Lindley (Ward 3). Returning council members Susan Wilkinson (Ward 5), Tim Gould (Ward 6) and Lewis Wheaton (Ward 7) were sworn in as well, and Gould was named mayor pro tempore. Wheaton was newly elected in November, but began sitting on the council in 2019 because of the resignation of Ron Fennel.

With the formalities out of the way, the new city council members will now officially begin making their mark on Smyrna. Because the city does not stagger its elections, the entire council will not hold a regularly scheduled election until November 2023.