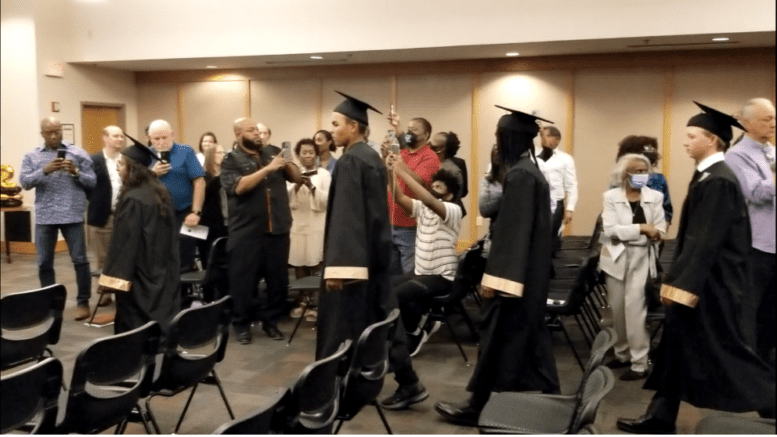 Process of graduates to their seats for the Sprayberry Interfaith Baccalaureate (Photo: Larry Felton Johnson)

The speakers were Pastor Tommy Stevenson of the Deep Waters Community Church, Dr. Ajay Ji Houde, the president of the Hindu Swayamsevak Sangh, Georgia Chapter, Faraz Iqbal of the Islamic Speakers Bureau of Atlanta, and Rabbi Daniel Dorsch of the Congregation Etz Chaim.

It was the second Interfaith Baccalaureate organized by the foundation.

Sharona Sandberg, the president of the Sprayberry Foundation spoke with the Courier before the event.

“The reason we started this interfaith Baccalaureate is because Sprayberry is the fourth most diverse school in the state of Georgia,” she said. “We speak multiple languages have multiple religions.”

“People were attending the baccalaureate less and less because it was a Christian-based thing,” she said. “So we decided to branch out and said, ‘Hey, why don’t we incorporate the four major religions that are represented at Sprayberry and invite everybody.”

“So that’s what we’ve done,” she said. “We have Christianity, Judaism, Muslim and Hinduism, they’re all represented, all four of them are represented, we have speakers from each religion.”

“And we have two seniors from the class of 2022 that speak, and then we give out certificates of baccalaureate, just some cute little certificates that we made up, just acknowledging them. This isn’t about converting them, or, you know, saying choose my religion or your religion. It’s giving them blessings from well rounded individuals.”

She said 18 or 20 students showed up for the first year the Interfaith Baccalaureate was held, with 37 attending this year, and that representatives from other schools interested in the format were at this year’s event.

Tara Sternagle was at the baccalaureate with her daughter Izzy.

Sternagle said, “I would say this is a wonderful opportunity to celebrate our graduates before the actual commencement.”

“Just another fun time to congratulate them, for them to put their cap and gown on to celebrate with other family members that aren’t able to attend commencement,” she said. “But also to bless them from all different faiths and all different walks of life come together as one, like the world should be, and they have a good example of that.”

“And this is just an opportunity for the children to be involved based on whatever religion, it doesn’t matter, it’s an interfaith, nondenominational everybody’s welcome event. And I’m excited to be here,
she said.

The program opened with Tonya Hawley, the vice president of the Sprayberry High School Foundation greeting the students, parents and guests.

“My name is Tonya Hawley, I am vice president of the Sprayberry High School Foundation. And more importantly, I’m proud mama of a 2022 graduate,” she said.

Rabbi Dorsch spoke first, and told the story of a man who made a bet that he could make a group of rabbis really angry.

“And so the man went to one rabbi named Sammai and said ‘Sammai, will you teach me the Torah, the entire book of Jewish wisdom, while standing on one foot?

“And so that particular man took a builder’s cubit, whacked the guy and told him to get out of the room.

“He then went to a second rabbi named Hillel and hello and said, ‘Hillel, will you teach me the Torah while standing on one foot?’

“So Hillel got on one foot, and he said ‘That which is hateful to you do not do to another person. Love your neighbor as you love yourself. That’s the entire Torah.

“The rest is commentary. Go out into the world.”

“Students of Sprayberry High School, have no doubt that this room is represented by people of all different faiths,” Dorsch said. “We have different customs, traditions and languages for prayer.”

“But if there’s one thing in this story that we all share in common, it’s the idea that we are all students learning each day a little better to love our neighbors as we love ourselves,” Dorsch said.

Student Kalen Hawley then read a poem that began with the thought, “Don’t quit when things go wrong, as they sometimes will …”

Faraz Iqbal of the Islamic Speakers Bureau of Atlanta said that his son was also a 2022 graduate, preparing to go to Georgia State University, and joked that he was using this opportunity to try out his advice on the Sprayberry students before talking to his son.

The first advice he gave was to continue education.

“My father came here in the 60s, he emigrated from Pakistan,” Iqbal said. “He went to Germany then Turkey, then he landed here and went to University of Florida. He’s a Gator.”

“And he always told me the reason why he came here is because he wanted to have an education to build a life for himself and his family,” he said. “And education has always been first.”

“And you know, I couldn’t get married until I got my master’s degree.”

Iqbal said his second word of advice is that students should make their mark on the world, and leave it a better place.

And finally, he said that in the Islamic tradition Muslims are taught to emulate love.

“These are two foundational elements that transcend so many different faiths,” he said. “Love God, and love thy neighbor.”

“In the Islamic tradition, the neighbor has rights on us,” he said.

Dr. Ajay Ji Houde, the president of the Hindu Swayamsevak Sangh, Georgia Chapter, began by greeting the students with “namaste,” which he said means “I bow to the divine in you.”

“We consider the entire world as one family,” he said. “And we believe that each and every element of this world: the air, the sun, the water, the people and the creatures, they all have the divine in themselves, and they contribute to the betterment of each one of us.”

He said that since the baccalaureate was on the KSU campus, he would use those initials to give easy-to-remember advice. The points he outlined from the initials KSU were knowledge, satisfaction, and uncomfortableness.

The first letter, “K” he said stands for knowledge. He said that in the Hindu religion teachers are paid the highest respect, and that teachers are not limited to classroom teachers. He said knowledge could come from a coworker or friend.

“Don’t get me wrong, but if success is coming to you at the expense of not being satisfied, you will not enjoy it,” he said. “If you’re satisfied with what you’re doing today, tomorrow, month after month after month, the success will follow.”

“The last part that I would say to you, is something that one of my mentors told me when I got into my career, was ‘be uncomfortable with what’s happening around you.'”

“If you’re comfortable with uncomfortableness, that brings the creativity that motivates you to do something different. No matter what it is.”

“One thing is constant is the change whether we like it or not,” he said. “And along with the change … comes the knowledge, satisfaction and uncomfortableness.”

“I would like to leave those thoughts with you.”

Pastor Tommy Stevenson said, “On behalf of the members of Deep Waters Community Church, I just want to say congratulations to all the graduates and parents …”

“About 17, 18 years ago you guys achieved an amazing feat, being born and coming into this world” he said. “And even though most of that success came from you parents, that was still considered a feat.”

“About nine months or so later, you accomplished the next achievement. You started to take your first steps,” he said. “and even though you stumbled a few times, you got back up.”

He then walked the audience through a number of other achievements in life, until he came to school.

“And somewhere around the age of 14, you began to think that your parents swallowed the stupid pill, just because they think NFT means ‘normal food temperature’,” he said.

“But you kept on achieving, and today you’re at graduation, another great achievement,” he said.

“So our charge to you as graduates is ‘Don’t stop achieving great things.'”

The students then came forward one by one to receive certificates from Sara Griffin, the principal of Sprayberry High School.